My Twitter friend, Joseph Cortese forwarded this article to me for publication.  One of the greatest rescue operations of the war was largely ignored until President Obama recognized it with a Presidential Unit Citation nearly 40 years later. Read what happened on that fateful day.

Note: All photos within this article were added from the internet by the administrator of this website. 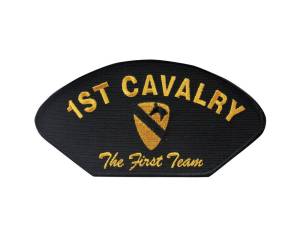 The engagement played out in a 1,000-square-mile flat patch of uninhabited, heavily forested wilderness alternating with islands of waist- to chest-high grassland. In parts of the forested areas, soldiers might see triple canopies overhead with towering old-growth hardwoods shading smaller 30- to 40-foot trees above a tangled undergrowth of vines and bamboo stands. Troops could be within 20 feet of an NVA company without knowing it. Several of these forested patches existed within a dreaded zone known as “Dog’s Head,” named for the zone’s shape along its stretch of the international border. 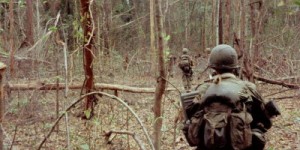 At 2 a.m. on the 25th, one of the Claymore mines exploded, killing a North Vietnamese officer. When his body was discovered at dawn, they found he was carrying maps and drawings of the 1st Cavalry fire support base. Hobson called his battalion commander, Lt. Col. Michael Conrad, who directed him to continue his reconnaissance northward. By midafternoon, Hobson’s troops passed an area where small trees had been felled, and they spotted a snare-type animal trap. The men suspected they were approaching some sort of installation. After an uneventful night, Charlie Company resumed its cautious reconnaissance. For many troopers, this day, March 26, would prove to be the most unforgettable of their lives.

Another unit under Colonel Conrad’s command was resuming its own search for the NVA 272nd Regiment that morning, about 2½ miles away from Charlie Company. Led by Captain John Poindexter, Alpha Troop, 1st Squadron, 11th Armored Cavalry Regiment, and its companion infantry company had chosen an open patch of grassland to establish their NDP. Poindexter, a tall, lanky Texan, was an armor officer, a qualified parachutist, and a Ranger with a college degree from the University of Arkansas. His men regarded him as a smart, thoughtful and tough but fair commander.

Outnumbered by more than 4-to-1, Charlie Company was surrounded and taking casualties from NVA weapons that included AK-47s and bunkered heavy machine guns. Hobson’s men saw their opponents dashing in the dense vegetation to secure the ground behind them. As soon as Conrad’s helicopter arrived overhead, it came under NVA fire from multiple positions and was forced to back off. Hobson tossed colored smoke grenades to mark his position, but because of the canopy and the effective NVA bunker camouflage, the battalion commander had difficulty in determining the extent of Hobson’s perimeter and the locations of the NVA positions. (Later analysis indicated the company had penetrated a large base complex manned by an estimated 400 NVA soldiers with numerous defensive bunkers.)

After an hour of fighting, both sides slowed their fire, switching to single, aimed shots. Hobson considered his options: He was pinned down on three sides; he couldn’t retreat; the NVA were already occupying his rear. He would have to bring out the wounded, and that couldn’t be done without exposing them to enemy fire. He couldn’t attack forward—they would be easy targets for NVA machine gunners in bunkers. There was no suitable place for a helicopter landing zone. The thick vegetation, well-concealed enemy positions, and the proximity of the opposing forces negated his tactical edge: plentiful and accurate firepower. Helicopters attempting to bring the company water and ammunition had been driven off by NVA fire. Hobson decided Charlie Company would have to fight it out where it was.

Captain Poindexter heard the firing when Hobson’s fight began and monitored the battalion radio net. Captain Armer, his infantry company commander, and Jerry Holloman, the A Troop first sergeant, watched helicopter gunships and Air Force F-4 Phantom jets trying to make strafing and bomb runs. Then they heard Hobson tell Conrad: “I’m down to the last of the smoke and only have a few magazines per man….About 30 casualties now.”

Armer, 31, who had been with Alpha Company for more than a year, looked at Poindexter and Holloman and asked, “What are we going to do?” The three agreed it would take several hours of “jungle busting” for the tanks and ACAVs to make it to Hobson’s company. Poindexter’s troops were exhausted from weeks in the field. With just seven hours until nightfall, they could be facing a nighttime withdrawal. Poindexter pondered the odds. It was a long shot. “If I was with those guys,” said Armer, “I’d sure want somebody to try to get me out.” Poindexter looked up and said, “Saddle up.”

For 2½ miles the Blackhorse Regiment steered its tanks through the jungle. The lead Sheridans, powered by supercharged diesel engines, created pathways, avoiding large trees and pushing down or running over smaller trees, brush, bamboo, vines, and tall grasses. Sometimes the brush was so thick that drivers could barely see vehicles in front of them. Every 30 minutes or so, a different tank took the lead to prevent the lead Sheridan from overheating.

Meanwhile, at Charlie Company, Hobson’s men received a morale-boosting visit from the 1st Cav’s assistant division commander, Brig. Gen. George Casey. Piloting his own helicopter, the general braved NVA gunfire to hover over Company C’s position while his aircrew kicked out ammunition, smoke grenades, and water cans. The men on the ground heard bullets strike Casey’s helicopter. Finishing the drop, the general turned the now smoking helicopter back to the fire support base. In another source of hope for the men, Spc. 4 Rick Hokenson, a sniper from Minnesota, used his 7.62mm M-14 rifle and powerful scope to busily pick off any hapless NVA soldier who made the mistake of exposing a face or body part.

Judging from the sounds of gunfire at 4 p.m., Poindexter, amazed that Alpha Team had not been ambushed in the last three hours, knew he was approaching Hobson’s men. He radioed Conrad: “I’m putting out smoke on my point. Can you give me a spot relative to Racer [Hobson]?” Moments later, the battalion commander replied: “Make a half-turn to your left. Come around to a heading of 330. You’ve got 200 meters to go.” 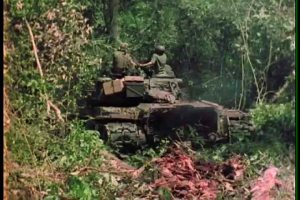 Poindexter assessed the situation, concerned about the few hours of daylight left. Hobson had two men dead and about 40 wounded—one-half of his company—and he urgently needed to get the wounded to a medical facility.

Amid desultory firing by both sides, Poindexter put his vehicles and infantrymen in position and called in an airstrike by Phantom jets and Cobra gunships. At 5 p.m., the cavalry commander radioed, “Commence firing!”

The deafening barrage temporarily silenced almost all enemy firing. The NVA was dug in, and Poindexter ordered an advance. The troop vehicles slowly moved forward, firing at the exposed bunkers and muzzle flashes spotted in the surrounding jungle. NVA firing resumed with RPGs coming from the jungle—each followed by a telltale trail of smoke that marked the firer’s position. 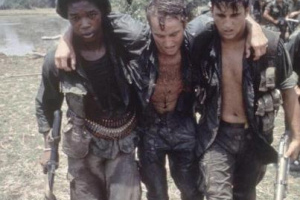 “No sweat,” Armer yelled back. “Most of their stuff is high now. We’re getting to them!”

After an hour of fighting, Alpha Team’s attack had not progressed much, but it had hurt the enemy badly. It was largely a toe-to-toe slugfest, and the Americans were holding their own. Poindexter decided to continue trading fire with the NVA to increase the enemy casualties before withdrawing to collect Company C and bring all troops back to the NDP.

Rejoining Charlie Company, Alpha quickly made preparations for the return trip. Its mechanics assessed the vehicles and made hasty repairs. One tank and one ACAV were judged unsalvageable and were stripped of anything useful. A third vehicle was rigged for towing. Near sunset, Poindexter ordered all wounded and dead placed in the vehicles and all able infantrymen to mount vehicle decks.

Unfortunately, the story of this skillful, daring rescue went largely unnoticed for four decades, until Oct. 20, 2009, when President Barack Obama awarded the Presidential Unit Citation to Alpha Troop at a ceremony in the White House Rose Garden. More than 80 members of the troop attended, as well as many from Charlie Company. It was a long-overdue recognition for the brave troopers.

This article was featured on HistoryNet and originally published in the December 2013 issue of Vietnam Magazine.

5 thoughts on “Rescue at Dog’s Head”