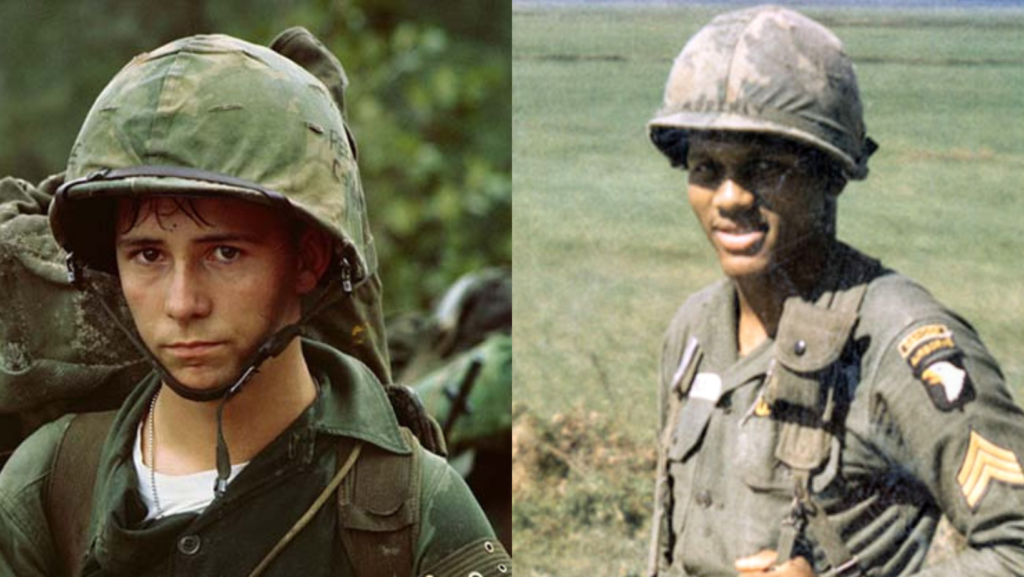 Left: 17-year-old USMC Private Richard Coggins waits on the beach during the Marine landing at Da Nang, 1965. Right: Army Sergeant Tyrone Adderly, 502nd Infantry, 101st Airborne, Vietnam 1966. One of these has a helmet band. The other doesn’t.

In 1965, the government issued camouflaged covers for their steel helmets. The Army also distributed camouflage helmet bands to secure vegetation for added camouflage and to keep the cover in place. Marines didn’t receive them until late 1968. Why three years later? Vietnam Army Veteran Joe Boscia, posed this question and a couple of others to this group’s page. Feel free to sound off.

The Army called it “Band, Helmet, Camouflage, US” and issued it to soldiers in Vietnam. The USMC didn’t.

Helmets worn by US service members in Vietnam were the same M1 steel pot helmets issued to troops beginning in 1941. Among the adjustments made after World War II was the introduction in 1963 of a reversible fabric cover with “Mitchell Pattern” green camouflage. As Vietnam ramped up in 1965, the camouflage helmet cover became general issue to Marines and Army GIs. Army soldiers also received a green elastic cotton band to hold vegetation for camouflage much like the webbed helmet nets of WWII. Always improvising, soldiers started using the helmet bands to hold all kinds of things, from insect repellant and rifle oil to cigarettes and toilet paper.

The helmet band, however, was not issued to Marines until late 1968.

But in most photos, Vietnam Marines aren’t wearing helmet bands at all, just the steel pot and camouflage fabric cover. Sometimes, as with Private Richard Coggins above, a Marine would buckle his M1 helmet liner leather chinstrap on the top front brim of the helmet. Just as often, there’s no leather strap. Only the fabric cover with nothing encircling it.

I would like to know why Marines weren’t issued the helmet band. Was it simply a matter of availability or something else?

In addition, I would love to hear stories from our veterans about what they kept in their helmet bands or how they might have decorated their helmets.

Did any of you Marines cut bands from inner tubes?

“17 Feb 1968, Hue, South Vietnam — A Souvenir doll with the slogan “Cheep Up” adorns the helmet of this fighting U.S. Marine in Hue.” — Image by © Bettmann/CORBIS

In war, little things make a big difference. A helmet band might seem like minutia. But when everything to keep you alive must be carried, a little thing like an elastic loop might mean the difference between life and death.

9 thoughts on “Why Didn’t Marines Wear Helmet Bands in Vietnam?”