Another iconic picture from the Vietnam War.

You might not know her name, but you’ve probably seen a photo of Kim Phuc – She is well-known as the terrified young girl in an iconic photo from the Vietnam War.

By chance, you might have read a report or a story on American main stream media over the years that asserted that Kim Phuc, the little nine year old Vietnamese girl running naked from the napalm strike near Trang Bang on 8 June 1972, was burned by Americans bombing Trang Bang.  The picture communicated the horrors of the Vietnam War in a way words never could, helping to end one of the most divisive wars in American history and later becoming a symbol of the cruelty of all wars for children and civilian victims.  This picture was one of the reasons the US lost as the whole world sees it.

And so the perception continued…

Unfortunately the public never realized that no American had involvement in this incident near Trang Bang that burned Phan Thi Kim Phuc. The planes doing the bombing near the village were VNAF ( South Vietnam Air Force) and were being flown by Vietnamese pilots in support of ARVN troops on the ground.

The Vietnamese pilot who dropped the napalm in error is currently living in the United States. Even the AP photographer, Nick Ut, who took the picture was Vietnamese.  Most American soldiers had already left the country by then, the Paris Peace Accords were signed several months later.

Here are the front pages of some newspapers when the picture and story published the following day:

This event was witnessed and reported by UPI television correspondent Christopher Wain, and also reported at the time, by noted correspondent Peter Arnett. Other journalists who were not there, through assumption, sloppy work, or malice, have since reported that the attack was by US aircraft, and have further embellished the story with time.

The facts behind the picture:

The incident in the photo took place on the second day of a three day battle between the North Vietnamese Army (NVA) who occupied the village of Trang Bang and the ARVN (Army of the Republic of Vietnam) who were trying to force the NVA out of the village.

Kim Phúc joined a group of civilians and South Vietnamese soldiers who were fleeing from the Caodai Temple to the safety of South Vietnamese forces who held positions 300 meters up the road.  One of the South Vietnamese Air Force pilots mistook this group for enemy soldiers (seeing weapons and uniforms within the group as he passed by 100 ft. overhead at 300 mph, he thought the group might be leading an attack on those nearby friendly forces).  The pilot diverted from his planned bombing run of the enemy bunker complex to attack the charging group. The bombs contained napalm, a highly flammable fuel, which killed and badly burned the people on the ground.  The bombing killed two of Kim Phúc’s cousins and two other villagers. The iconic black-and-white image taken of children fleeing the scene won the Pulitzer Prize and was chosen as the World Press Photo of the Year in 1972.

Thumbnails of the film footage showing the events just before and after the iconic photograph was taken. 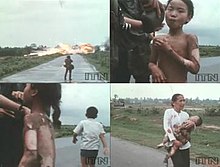 Less publicized is film shot by British television cameraman Alan Downes for the British ITN news service and his Vietnamese counterpart Le Phuc Dinh who was working for the American station NBC, which shows the events just before and after the photograph was taken. In the top-left frame, a man (possibly Nick Út) stands and appears to take photographs as a passing airplane drops bombs. A group of children, Kim Phúc among them, run away in fear. After a few seconds, she encounters the reporters dressed in military fatigues, including Christopher Wain who gave her water (top-right frame) and poured some over her burns.  As she turns sideways, the severity of the burns on her arm and back can be seen (bottom-left frame). A crying woman runs in the opposite direction holding her badly burned child (bottom-right frame). Sections of the film shot were included in Hearts and Minds, the 1974 Academy Award-winning documentary about the Vietnam War directed by Peter Davis.

After snapping the photograph, Ut took Kim Phúc and the other injured children to Barsky Hospital in Saigon, where it was determined that her burns were so severe that she probably would not survive.  Kim remained hospitalized for 14 months, and underwent 17 surgical procedures, including skin transplantation, before she recovered from the burns.  Grateful for the care she had received she later decided to study medicine but struggled to come to terms with her deep physical and psychological scars.

Kim Phúc and mother at the hospital

Ut continued to visit Kim Phúc until he was evacuated during the fall of Saigon.

As a young adult, while studying medicine, Phúc was removed from her university and used as a propaganda symbol by the communist government of Vietnam. In 1986, however, she was granted permission to continue her studies in Cuba. She had converted from her family’s Cao Đài religion to Christianity four years earlier. Phạm Văn Đồng, the then-Prime Minister of Vietnam, became her friend and patron. After arriving in Cuba, she met Bui Huy Toan, another Vietnamese student and her future fiancé. In 1992, Phúc and Toan married and went on their honeymoon in Moscow. During a refueling stop in Gander, Newfoundland, they left the plane and asked for political asylum in Canada, which was granted. The couple now live in Ajax, Ontario near Toronto, and have two children.  In 1996, Phúc met the surgeons who had saved her life. The following year, she passed the Canadian Citizenship Test with a perfect score and became a Canadian citizen.

She said, looking back, that three miracles happened on that dreadful day:

On November 10, 1994, Kim Phúc was named a UNESCO Goodwill Ambassador.  In 1997 she established the first Kim Phúc Foundation in the US, with the aim of providing medical and psychological assistance to child victims of war. Later, other foundations were set up, with the same name, under an umbrella organization, Kim Phúc Foundation International.

She has dedicated her life to promoting peace and providing medical and psychological support to help children who are victims of war in Uganda, East Timor, Romania, Tajikistan, Kenya, Ghana and Afghanistan.

Kim Phuc, now 52, lives near Toronto, Canada, with her husband and two children, Thomas and Stephen.

The Girl in the Picture: The Kim Phúc Story, the Photograph and the Vietnam War by Denise Chong is a 1999 biographical and historical work tracing the life story of Kim Phúc. Chong’s historical coverage emphasizes the life, especially the school and family life, of Kim Phúc from before the attack, through convalescence, and into the present time.

Audio tapes of President Richard Nixon, in conversation with his chief of staff, H. R. Haldeman in 1972, reveal that Nixon mused “I’m wondering if that was fixed” after seeing the photograph.  After the release of this tape, Út commented, “Even though it has become one of the most memorable images of the twentieth century, President Nixon once doubted the authenticity of my photograph when he saw it in the papers on 12 June 1972…. The picture for me and unquestionably for many others could not have been more real. The photo was as authentic as the Vietnam War itself. The horror of the Vietnam War recorded by me did not have to be fixed. That terrified little girl is still alive today and has become an eloquent testimony to the authenticity of that photo. That moment thirty years ago will be one Kim Phúc and I will never forget. It has ultimately changed both our lives.”

Author’s note:  No single photograph turned public opinion against the war in Vietnam; no single image “expedited” its end. The war’s confusing aims and uncertain policy objectives, its duration, and its toll in dead and wounded all were far more decisive to its outcome.

For additional articles about Kim Phúc and this “famous” photo, click the links below:

http://www.warbirdforum.com/vphoto.htm  –  responding to the myth.