Two African American soldiers from Philadelphia fought together during the Ia Drang battles in 1965 South Vietnam and have been cherished friends since. Both moved in different directions upon their release from the Army and it’s been 24 yrs. since they last saw one another. Find out why and how this reunion came about.

I was eager to see Rapid-fire and Magoo reunite. It had been 24 years and their emotional embrace reflected such. As Magoo clutched Rapid-fire, he brusquely banged his closed fists several times on his friend’s back, saying, “We’re the only two left, man. … We’re the only two left.” Despite the heartfelt occasion, I couldn’t help but think what it all represented—some of the United States’ most cataclysmic late-20th-century policies of war, mass incarceration, and racial discrimination.

My friend Peter and I had been trying to arrange the reunion for more than two years. Peter knew Magoo from working at the VA in Philadelphia, and Rapid-fire is the president of a chapter of Vietnam Veterans of America that I volunteer within SCI-Phoenix, a maximum-security state prison about an hour outside of Philadelphia. Rapid-fire, 74, whose real name is Commer Glass, and John Turner Jr., known as Magoo, 75, are African American men who grew up in Philadelphia. They fought alongside each other as combat infantrymen in the famous Battle of Ia Drang in November 1965, the first major battle between the US Army and the North Vietnamese Army. Lasting 30 days, the battle took roughly 250 American soldiers’ lives.

Although Rapid-fire is almost completely blind and could not see Magoo, the instant Magoo uttered hello, he identified his old friend’s voice and wrapped his massive arms around him. Magoo looked slight next to Rapid-fire only because Rapid-fire is a bear of a man, standing 6′ 5″ and weighing 300 pounds. Their embrace lasted nearly two minutes, Magoo’s hands reaching the edges of the “D. O. C.” letters printed on the back of Rapid-fire’s brown cotton coat. While Magoo kept a stiff upper lip, Rapid-fire sobbed, the tears streaming underneath his large square black spectacles. I stood next to them at first, tearing up myself, but then felt I had interrupted something so intimate that it was wrong for me to look. I turned away and walked to the other side of the cement hallway and nonchalantly dried my eyes while looking over an array of religious pamphlets scattered on a fold-up table.

When visiting prisons, I don’t necessarily know what has brought people there; generally, I don’t care to identify people by their past misdeeds. In Rapid-fire’s case, however, I knew enough about his charges to say that it would have been more just had the state considered his military service and battle-related PTSD, before giving him a “life without parole” sentence. This would have allowed him the chance to plead guilty to a reduced charge that did not carry with it a mandatory life sentence. 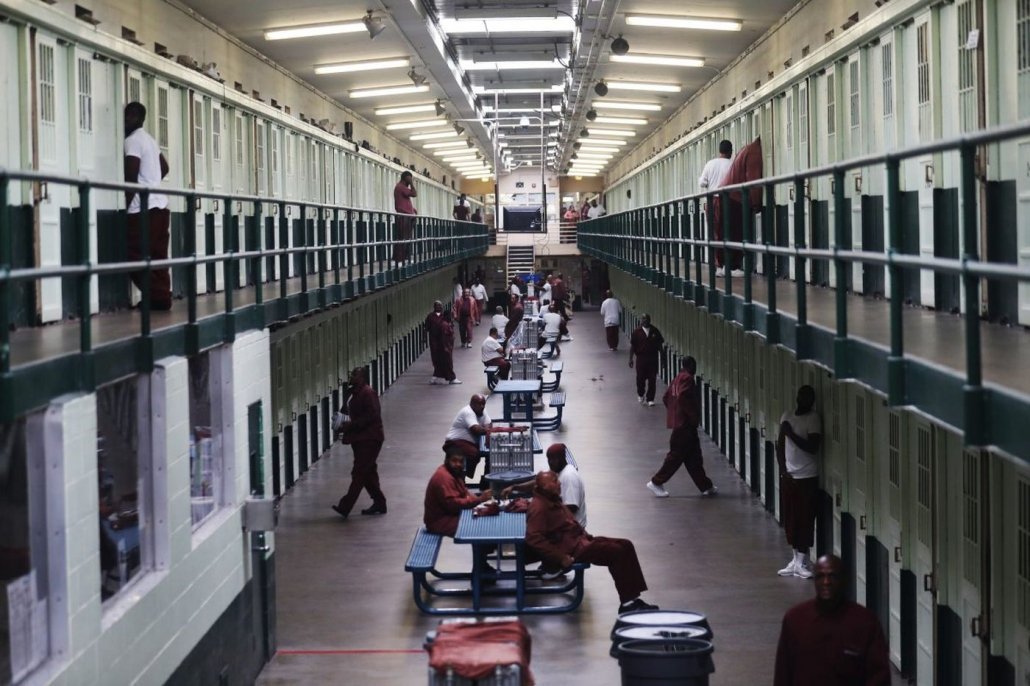 Residents in a block at Graterford Prison in September 2017. They were moved to the adjacent SCI-Phoenix facility in 2018. Photo courtesy David Swanson, Philadelphia Inquirer. May 17, 2018

Instead, Rapid-fire is a “lifer” who at this point has been locked up for 43 years. Like  “lifers” in the state of Pennsylvania, he will die in prison unless his sentence is commuted.

Incarcerated veterans represent a puzzle to the American consciousness because as veterans they are a type of hero, but as “felons” they are vilified and banished. Regarding support from major veterans’ groups, one Vietnam-era veteran who’s closely involved in state politics explained the attitude of mainstream groups by saying, “The thinking was, ‘That’s on them, they didn’t keep their nose clean.’”

For the vets we do commemorate, the valorization—be it in the form of parades, sporting event dedications, or legislation—places them on an awkward pedestal that many are reluctant to embrace. Despite this reluctance, many politicians are eager to brandish their support of veterans, creating a climate that has become imbued with “patriotic correctness,” according to veteran and writer Phil Klay.

Vietnam vets, however, didn’t necessarily experience this. Rapid-fire’s cohort has benefitted little from the Post-9/11 cultural shift that includes yellow-ribboned “Support Our Troops” ad campaigns and veterans’ courts. Vietnam vets are sandwiched between the “Greatest Generation” returning from World War II and the younger generation returning to relatively more recognition and resources following Iraq and Afghanistan. PTSD, for example, did not even appear in the Diagnostic and Statistical Manual of Mental Disorders until 1980. This is on top of the harsh return to civilian society in which some Vietnam veterans were called “baby killers” following public lament of a lost war.

Unsurprisingly, the Vietnam-era cohort to which Rapid-fire and Magoo belong is the most represented in the approximately 180,000 incarcerated American veterans, according to 2015 Bureau of Justice statistics. One incarcerated veteran who has been behind bars for several decades explained to me the impact of public opinion toward veterans. At his trial in the 1970s, his military service was used against him. The judge at his sentencing repeated that he was a “trained killer,” an accusation that is hard to imagine would be leveled today.

Magoo was a medic in Vietnam. Rapid-fire, wiping away tears, introduced him to fellow veterans saying, “He has always been there for me. When we was being overrun, they’d call ‘Magoo!’ He was right there. My man, my man, my man. …”

Being a medic meant Magoo not only saved lives but also cradled fellow soldiers in his arms as they bled out from hopelessly catastrophic wounds, he explained to me. Medics, I’ve learned from many veterans’ accounts of war, have an outsized burden of trauma because they “play God,” so to speak. They can save lives, and often do, but they also are disproportionately saddled with the burden of not being able to save lives—which they feel responsible for. More than 50 years after serving in Vietnam, Magoo continues to struggle with PTSD symptoms. He shared how a cat’s cry is still an everyday trigger for him. The sound brings him right back to the sounds of the shrieking Vietnamese children whom he witnessed being slaughtered by American—and sometimes Vietnamese—bullets and bombs. 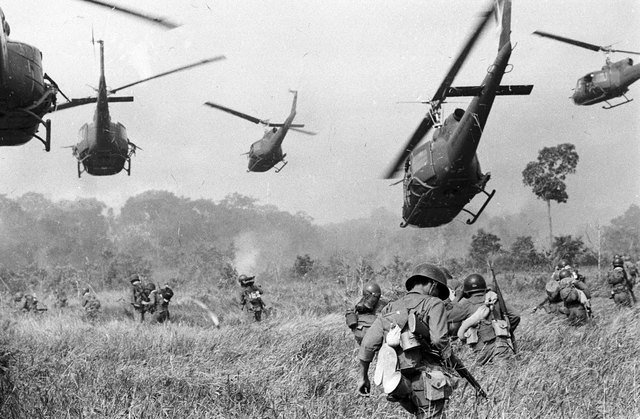 I had wrongly assumed Magoo earned a Purple Heart in Vietnam because he endured extensive fighting and many of the veterans I know from Iraq and Afghanistan earned one. “No, I never got a Purple Heart,” he said. “I was never wounded!” He of course meant physical wounds, the ones we valorize in our veterans, not the psychological ones. But Magoo did admit getting shot—on two separate occasions. But this was in Philadelphia, after returning from war. I’ve come to expect the irony of being a U.S. soldier who survives foreign wars, only to return to American communities in “peacetime” when there is as great, if not greater, risk of suffering gun violence and trauma.

Remarkably, Magoo returned to Vietnam earlier this year and communed with the Vietnamese who still cope with that war’s long shadow. He told me he was struck by how they held so little animosity or bitterness towards Americans. He followed this by saying, with resignation, that Vietnam was “fucked up” because “I was killing the wrong guy.” He was not the first African American Vietnam veteran to tell me that the North Vietnamese once dropped leaflets on US troops stating, “No one over here ever called you nigger.”

Magoo had not seen Rapid-fire in 24 years. “I just hate seeing anybody in cages,” he told me as we drove to the prison. I sensed his apprehension as he grew increasingly quieter as we neared the facility. He later revealed that before he arrived at my house to carpool there, he had gone to a bar and had a few beers despite not being much of a drinker. Like most other Americans, he wanted to avoid the reality of our prisons and what they represent. It’s the home of our society’s “criminals,” neglected, sick, and socially discarded.

Magoo said he’s glad he doesn’t have a felony charge on his record but that he’s “just lucky.” I imagine he struggles with two forms of survivor’s guilt: surviving Vietnam while valiant comrades lost their lives, and surviving the criminal justice system that has ravaged so many communities of color and ensnared his close friend for more than four decades.

Despite Vietnam being an atrocity that rich Americans largely opted out of (“the poor man fighting a rich man’s war,” as the expression goes), the solidarity shared by soldiers in Rapid-fire’s company transcended racial difference or other common fissures of American identities, like religion and class. On the night Magoo visited, Rapid-fire said to the chapter, “We fought them jokers, 30 days in a valley at one point. … And there were people who lost their lives all around us. They truly gave their lives. Not because they thought it was right, but because they were fighting for their brothers.”

But neither the brotherhood nor the sacrifice has been accurately depicted by Hollywood. Rapid-fire touched on the misrepresentation within war movies when he said at the meeting, “You all know them movies. You watched them movies. I hate the movie. Our units had guys 17, 18, 19 years old, multiracial, and from all over the place. And all they gave the props to were the Caucasians.” While I naively thought he meant this abstractly because it could apply to almost all war movies, We Were Soldiers, starring Mel Gibson (2002), was made about the exact battle they fought in Ia Drang. (Only one black actor, who had a secondary role, was cast in the film.)

When I first met the incarcerated veterans group, I was curious about their current state of patriotism given the juxtaposition of courageously serving a country that then offered so little support. One of the reasons I volunteer is because I find their perseverance in the face of such hardship inspiring. They served the nation in war, exited the military with mostly honorable discharges, and reentered a civilian society that did little, at best, to assist their transition in terms of health and social needs. Others faced discrimination and were outright abandoned. Despite their trauma, neglected needs, severe sentences, and a penal system they have endured, they generally keep a certain patriotic faith.

Commer Glass, known as Rapid-fire, is the president of the Vietnam Veterans of America chapter in SCI-Phoenix, a maximum-security state prison outside Philadelphia. Nov. 11, 2019. Photo courtesy of R. Tyson Smith

This seemed remarkably powerful in its clarity and essence. For Rapid-fire, he’s survived the nation’s “worst” and the punishment of being the “worst of the worst,” but unlike fellow soldiers who perished, he is nevertheless alive, and something better must be possible for him and worth fighting for.

R. Tyson Smith is a sociologist and lives in Philadelphia. He volunteers for Vietnam Veterans of America, Chapter 466 at SCI-Phoenix.

This story originally appeared in THE WAR HORSE on November 27, 2019. Here is the direct link: https://thewarhorse.org/a-long-awaited-reunion/