How different is the training today compared to the days of the Vietnam War?  I went through eight weeks of Basic Training at Fort Knox, KY and then immediately bussed to Fort Polk, LA for an additional eight weeks of Advanced Infantry training (AIT). Now, a fully trained Army Private First Class, the military rewarded me with a thirty-day leave before flying me to their war in Vietnam.

Some of the PFC’s from my graduating class postponed their deployment by choosing Airborne and then, Ranger / Special Forces training.  Others initially joined the military with a guarantee to a particular military specialty such as helicopter pilots, Officer Candidate School, Armor, artillery, supply, cooking, and clerking to name a few.  However, most eventually ended up in Vietnam after their training.

During the 1980’s, I remember hearing rumors about the mess halls serving beer during meals, and recruits getting an hour to enjoy meals without harassment from roving Drill Instructors.  My wife often complains that I eat too fast…I firmly believe this was ingrained into my psyche during my time in the military.  During training, I didn’t know when the DI would storm into the mess hall and chase us out…sometime we had a full ten minutes.  In Vietnam, when in the bush, eating was not scheduled at a set time and we quickly scarfed down meals whenever we could. 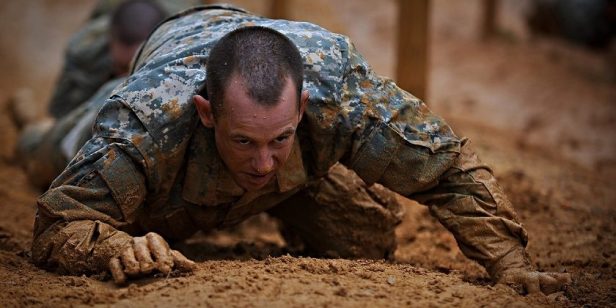 In the Army, basic combat training is the first step of training as a soldier, and for those in fields like the infantry, it marks the beginning of an arduous and comprehensive skills-based training regimen.

Infantrymen take part in one station unit training, also called OSUT, at Fort Benning, which incorporates their basic combat training and advanced individual training, or AIT, into one location. Basic training is typically broken into three phases, formerly identified as red, white and blue, phase, they’re now designated numerically, and at Benning, there are five phases instead of three.  Over the course of 14 weeks, civilians are transformed into soldiers and trained as infantrymen by Fort Benning’s drill sergeants, all of whom served in the infantry. The majority of drill sergeants at Benning are also combat veterans like Staff Sgt. Kristopher Jackson, who deployed twice to Afghanistan and once to Iraq.

“All our training is training infantrymen,” says Jackson. “They’re taught to shoot, move, communicate, carry a lot of weight, and become the most fit soldiers in the Army.”

U.S. Army soldiers from the one station unit training, OSUT, negotiate an obstacle course during their first week of Basic Training in Fort Benning, Georgia, March 9, 2012.

The soldiers live in an open squad bay where any vestige of privacy is gone. They sleep in bunks and store their equipment in wall lockers. When the drill sergeants need to address the platoon, they do it en masse.

“In the middle of the bay we tape off a section in the middle, called the kill zone, and whenever we need to talk to the whole platoon we’ll tell them to toe the line and they’ll come right to the edge of it and wait for the senior drill sergeant to come in,” explains Jackson.

This kind of discipline and structure is instilled the moment they arrive at Fort Benning.

According to Jackson when the soldiers first get off the bus they are greeted by their drill sergeants, though “greeted” is a nice way of saying they’re harassed and harangued by complete strangers, which is called the “shark attack.”

“What happens when they first arrive is we have a thing called the shark attack,” says Jackson. “We toss a little bit of confusion at first to kind of put the fear factor in them. That way we can start the whole discipline process for what they need to do.”

The initial 72 hours involves in-processing and paperwork, but it also sets the tone for the rest of the training.

“We want to go ahead and set that confusion and those loud noises out of the gate at the beginning,” says Jackson “Once they put that first foot down on the ground, they kind of know what they’re in store for.”

Once the in-processing is out of the way, it’s on to phase one.

“You’ve got the team development course, you have the obstacle course, and the confidence course,” says Jackson. “You have a lot of team building things right in phase one because those guys are going to have to rely on those guys to the left and the right.”

According to Jackson, one of the defining moments of phase one is the confidence course, which privates face during the third week of training. 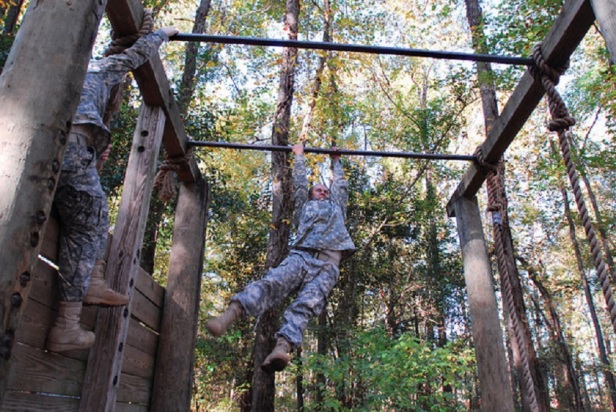 After climbing a half wall with the aid of a rope, Infantry recruits learned why the obstacle is called the Wall Hanger. The Soldiers had to reach the other end of the pole and use the ropes to climb down off the obstacle at the Sand Hill confidence course at Fort Benning, Georgia.  U.S. Army photo.

Completing the confidence course involves navigating a host of grueling obstacles, with the ultimate goal of instilling a sense of accomplishment in the soldiers as they make their way through it.

“They complete an obstacle, and say to themselves, ‘I can do this, I can be a soldier,’” says Jackson. “You’ve got kids from different backgrounds; you know from a city, for instance, and coming right into a course like that and being able to complete it is a step in the right direction for them.”

After the confidence course, the soldiers move on to rifle marksmanship during phase two of their training.

This phase is very crucial as far as becoming an infantryman and doing the job once you complete training,” says Jackson.

The privates start training with the M4 carbine and learn the weapon’s clearance procedures, safety rules, and weapons maintenance. As the training moves along, they shoot with back-up iron sights as well as the close combat optic, and go over single, multiple, timed, and moving targets prior to their rifle qualification.

For the rifle qualification, the soldiers fire at 40 targets from three different positions: the prone supported, the prone unsupported, and the kneeling.

Throughout it all, their drill sergeants instruct them in marksmanship.

“Some of the things that we see they have trouble with is obviously they’re shooting for the first time,” says Jackson. “Some of these individuals have grown up using weapons and they’re a little bit easier to mold and teach, and some who have never touched a weapon in their life, and it can be scary for them shooting a weapon for the first time.”

However, by the time they finish their rifle marksmanship training, they’re effective shooters, says Jackson.

Then it’s time for the third phase of their training.

At week seven, they start moving into heavy weapons.

“You’ve got your .50 cal, we do hand grenades, your M320 grenade launcher, your M249 squad automatic weapon, your M240, and your land navigation assessment,” explains Jackson.

Throughout the third phase of training, the soldiers are tested on first aid, which is taught continuously to infantrymen throughout basic. They also cover their weapons clearing procedures, are trained on how to use their radios, and are taught buddy and fire team tactics.

“I think the crucial part, in my experience, from third phase is the buddy team and fire team training,” says Phillips. “This is when they start to move together as a buddy team and as a fire team. When they become infantrymen, that’s what they’re going to operate in, as a fireteam and at the squad level.”

For soldiers in many other military occupational specialties, the end of third phase marks their graduation from basic, but for the infantry, it’s on to phases four and five where they learn the finer points of infantry combat and receive even more comprehensive training in battlefield skills.

This article, written by James Clark, originally appeared in Task & Purpose on May 16, 2016.