Skip to content
Date: February 2, 2017Author: pdoggbiker 2 Comments
Please welcome my guest Chuck Jackson, a Vietnam Veteran and author of “One Month, Twenty Days, and a Wake Up”. It is a fictional account of one man’s experience when training and then serving in Vietnam as a USAF Pararescue (PJ). It gives homage to those who did and now serve as PJ’s. Chuck wants to clarify the book is not about him.
`
`

In December 1968, I completed 14 months of Special Forces training and become a member of the Air Forces’ Pararescue team.  I left my wife in tears as I joined a hundred plus men from all branches of the military for the dreaded flight to Vietnam.  Dressed in fatigues, we boarded the aircraft at Travis AFB; our trip would include scheduled stops in Alaska, Japan and then on to Vietnam. The closer we came to Da Nang – our final destination – the more nervous we became.  Some soldiers went silent, while others like me became giddy and talkative.

Upon our arrival, the weather was cold and rainy; the scene, bedlam with aircraft of all sort and sizes parked haphazardly and various military vehicles running back and forth – carrying men, fuel, and cargo.  The haunting cargo was in those vehicles filled with black bags containing the valiant departed.  They will soon be on their final journey back to the world and their grief stricken families.

Once off the aircraft, we proceeded to a large metal hanger, where we waited in line for written orders to our final destination.  When I reach the front of the line and check in with the Army corporal, his contempt was obvious.  He barked, ” You must be someone very special to warrant a personal Huey?”  He glanced up at my beret and then looked at me with a jealous frown.  I stood there proudly and responded to his look with a wide smile.  Giving up, he shook his head from side to side and then pointed out a soldier who stood on the flight line by himself, “Just go over there and wait with that doctor.”  He handed me a manilla envelope with my orders and records and then barked loudly, “Next!”

I walked over to the solitaire soldier and noted gold clover leaf insignia on his shirt collars.  After saluting the Major, he looked mystified by my burgundy beret.  I broke the spell by asking, “You going to Pleiku, sir?”

I quickly squared my shoulders and stood pompously,  “I’m Pararescue, sir.  We all wear the beret and flash.”

“Pararescue, what’s the hell is that?”

I laughed to myself at his ignorance, “Sorry sir, I’m Special Forces, trained specifically for search and rescue.”  The officer acknowledged me with a smile and then started scanning the airfield as if he were looking for somebody.  With nothing more to say, I joined him in taking in the sights.

After waiting there for an hour, an Army Warrant Officer finally approached us. “Are you Major Greco and Sergeant Johnson?” He asked after saluting the major.

“Yes Sir,” I responded.  The major simply acknowledged him with a curt nod of his head.

“OK, grab your gear and follow me.”  He turned and began walking across the tarmac with the two of us hot on his heels.  He stopped at a Huey similar to the Bell helicopter I had trained in the previous summer.  The rotors were already turning as the aircraft idled smoothly. The co-pilot in the left-hand seat waved to us as the Warrant Officer climbed into the right side seat and adjusted his chicken plate.  The door gunner was pointing to the center bench seat and pantomimed for us to buckle up.

A moment later, I heard the pilot check in with the tower and then shouted, “Hold on.” The engines roared as he lifted the aircraft to a hover six feet above the ground, the nose dipped at a forty-five-degree angle and then the vibrating machine shot forward across the runway, rising quickly to a height of 2,000 feet.  I looked at the Major and saw that he was white around the mouth and his face beet red. 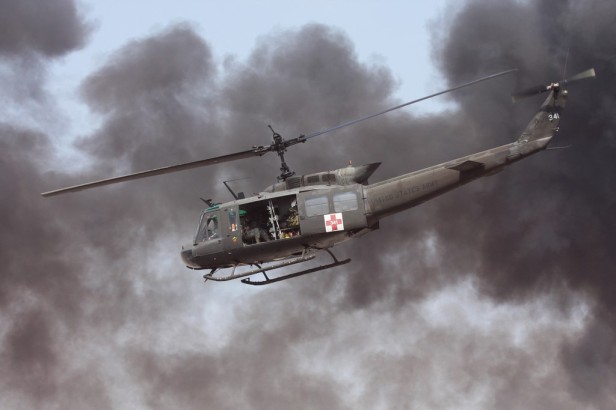 I yelled, “First time on a Huey, Doc?” He nodded, then leaned over toward the door and puked.  The pilot increased altitude, banked left quickly which forced the doctor to puke a second time.  The heavy rain washed his regurgitated meal from the floor, thus, saving us from the sickly mess.  However, when the wind shifted, the rain poured into the cabin, soaking us – causing cold chills to run down our spines.

After flying for what seemed like an hour,  the pilot suddenly banked the Huey hard to the left, brought the nose up and then landed without a bump.  Major Greco looked at me, “Do you really fly in one of these?”

“Yes sir!” I responded and giving the officer a wide smile.

“God, I hope I don’t have to ride in one of these things again.”

With his fatigues and boots covered in puke, I could not stop myself from laughing. He gave me an annoyed look and then started laughing himself.  This was not the last time the major and I would cross paths.  I saluted, and we parted ways.

Pararescue Beret & Flash
Motto: “We Do These Things, That Others May Live” 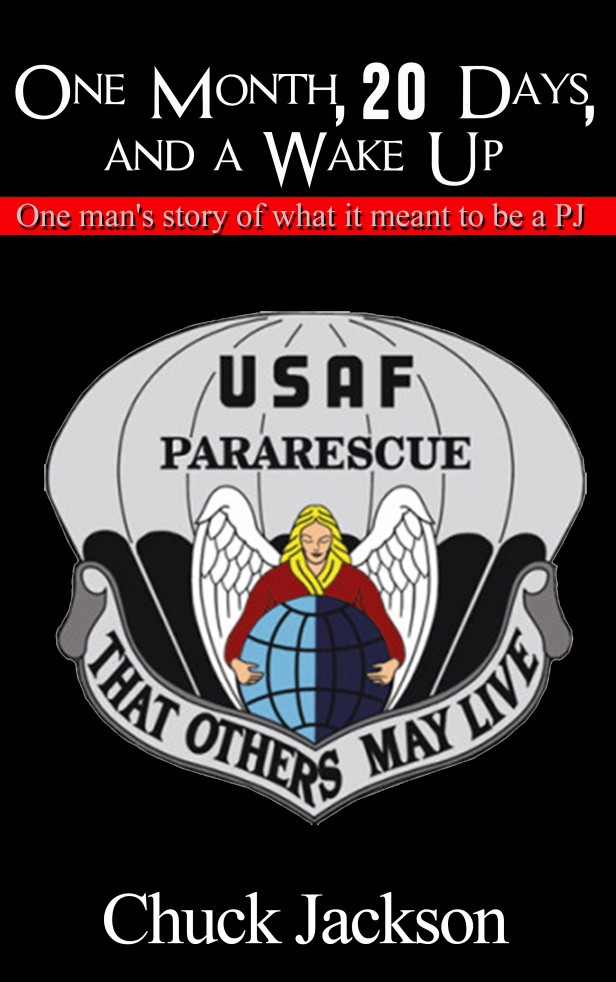 One man’s story of what it meant to be a PJ.

In 1966, the political leaders in Washington and the Pentagon made the decision to escalate the war in Vietnam. In doing so, the demand for a trained military far exceeded the supply. In an attempt to meet this demand, the Selective Service was required to draft thousands of young men into the military and send them to Vietnam to fight in United States’ most controversial war. Most young men were sent with little or insufficient training to the commanders who put them in reckless jeopardy to satisfy the political ambition of a few in the White House.

One Month, 20 Days, and a Wake-Up follows a young man during his four years while serving in the Air Force.  He and his best friend volunteer for an elite career in the field of Pararescue. They spend 14 months in grueling training where only the best and those with the desire to push themselves to the limit, successfully become a PJ.

When he graduates and proudly wears the burgundy beret and Pararescue Flash, he knows it is only a matter of weeks before he is assigned to a Pararescue flight crew in Vietnam. The book also follows his 13 months in Vietnam where he quickly learns the horror of war and how he must adapt to not only keep his sanity but also to return alive.  His story contains several of the rescue missions he and his PJ brothers completed; however, not all of those rescued are recovered alive. When he faces a personal bereavement, he must reach deep to restore his integrity, and keep his oath,

These things I do, that others may live.

Chuck Jackson is a retired accountant currently living in Southeast Florida. He was an ‘Air Force Brat’ and followed his dad’s 33-year military career by also serving four years in the Air Force. For years, he spoke little of his Vietnam experience, suffering similarly to other Vietnam Veterans who languished in silence. With his writing of this book, he wants to help return the honor and dignity to those who served with him.  He dedicates this story to the men who proudly served as PJs.

One Month, 20 Days, and a Wake Up is available only in digital e-book format and can be purchased at the following Internet locations: Amazon, Nook (Barnes & Noble), Kobo, iTunes (Apple), Lulu. For direct link to any of these websites, visit my website and click on the menu item About/Books

Chuck is new to blogging and his website has only been in existence for a few months, accumulating a dozen short posts so far.  He shares his time writing new posts and working on his second novel that should be published later this year.  Drop in – look around – and leave him a note.  Tell him that John sent you.  http://www.chuckjacksonknowme.com

Many thanks for the article Chuck! Thank You for your service and Welcome Home Brother!  Watch for my book review coming on Amazon and also added on this website where I list my library of Vietnam War books and respective reviews.