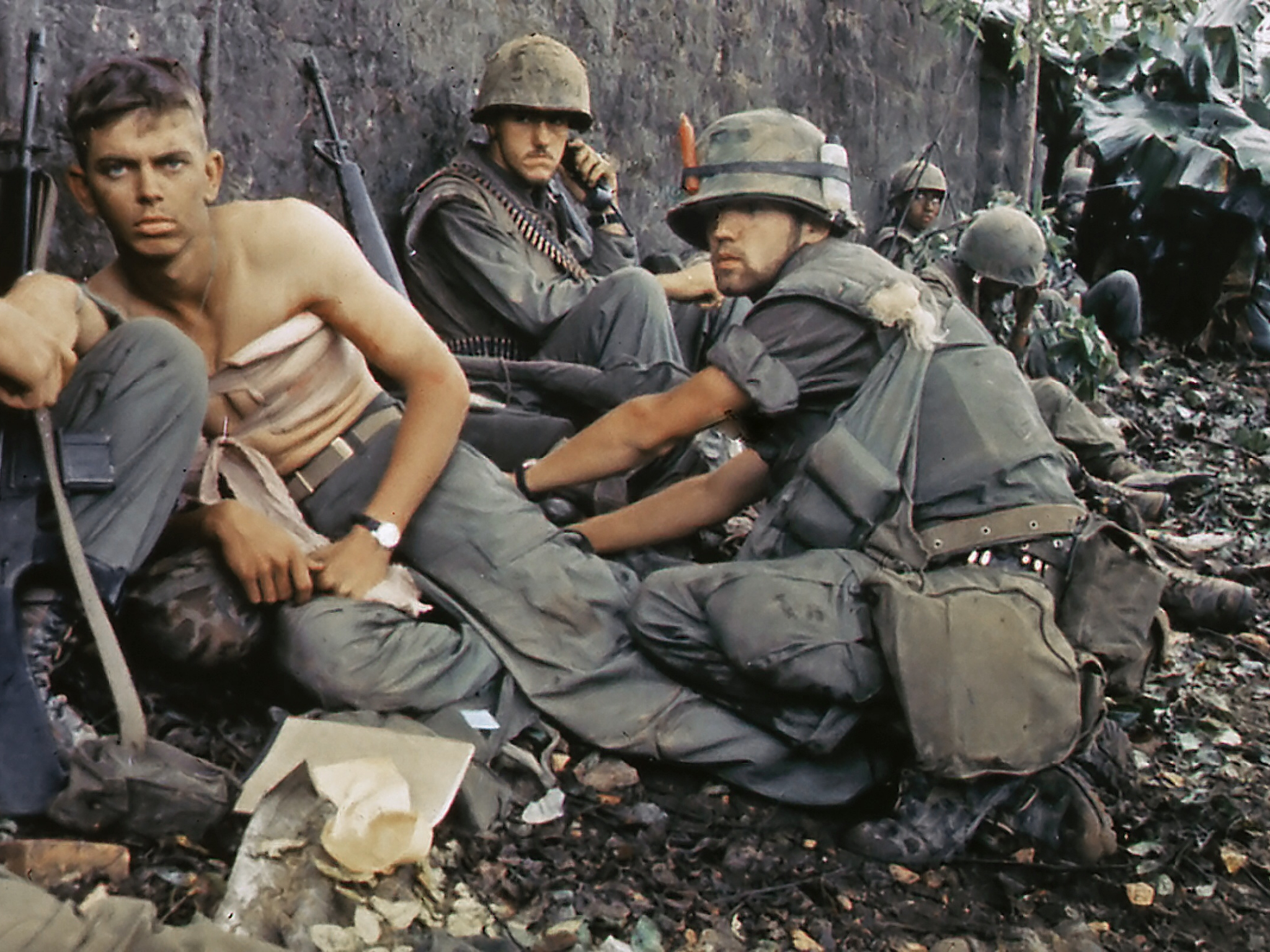 The corpsman in the picture is Doc Dennis Howie of Hotel 2/5. He was later medevaced after as his squad leader puts it, “mind went south”. The man being treated is David Crum. This was the first time he was wounded. He was wounded two more times before the end of the battle. The man in back talking on the radio is T.J. Walker. After the squad leader, Lance Corporal Robert Meadows was medevaced on Feb 3, he took command of the squad from 1st Platoon Hotel 2/5 until L.Cpl Meadows returned on Feb. 11 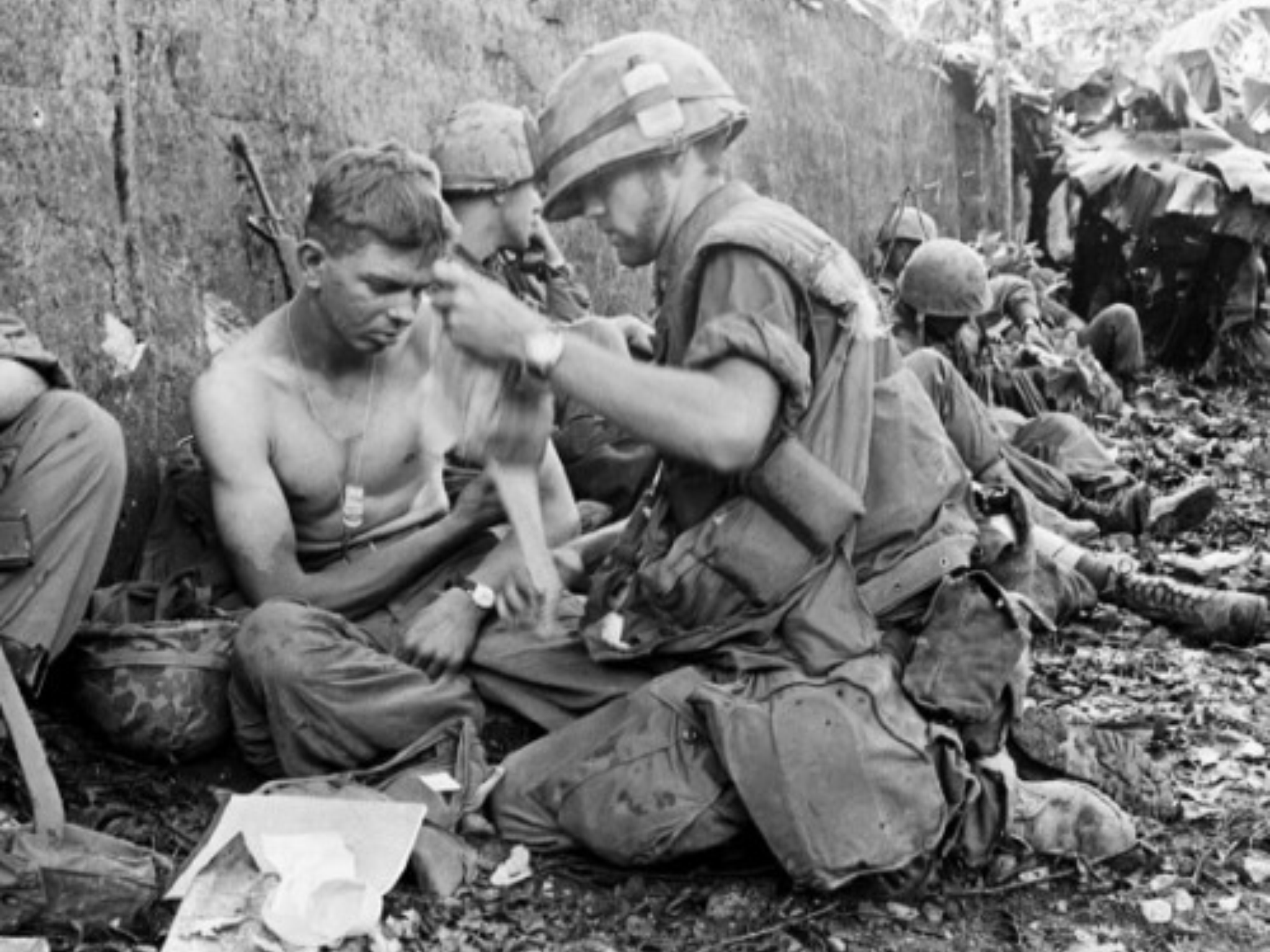 The Battle of Huế (also called the Siege of Huế), which took place from January 30 until March 3, 1968 was one of the bloodiest and longest battles of the Vietnam War. In February 1968 in the South Vietnamese city of Huế, eleven battalions of the Army of the Republic of Vietnam, two U.S. Army battalions, and three understrength U.S. Marine Corps battalions, for a total of 16 battalions, defeated 10 battalions of the People’s Army of Vietnam and the Viet Cong. 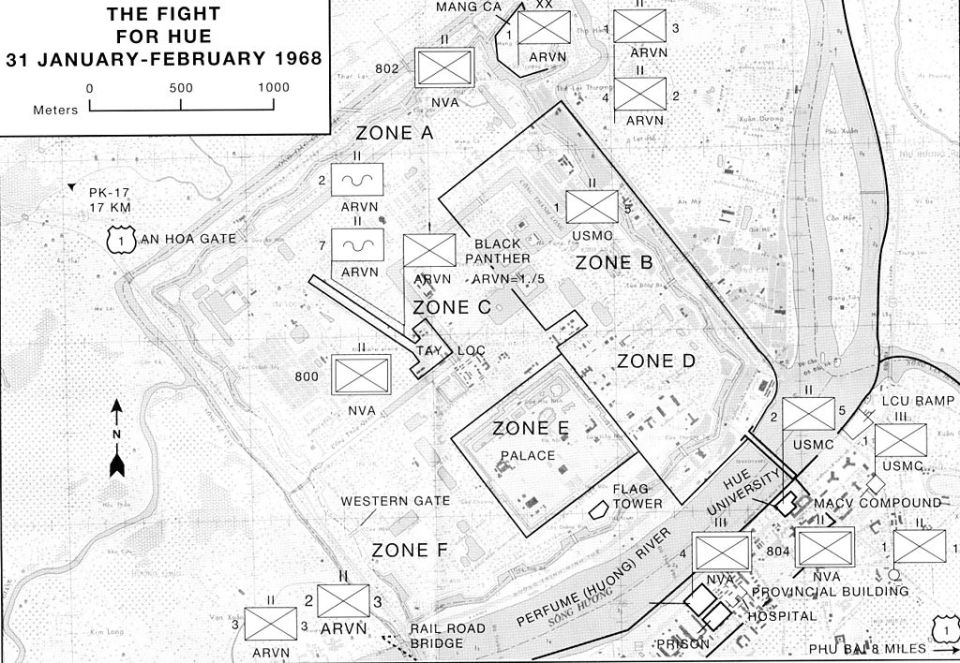 To start off the Vietnamese New Year —Tết— the Viet Cong and North Vietnamese Army (NVA) took the South Vietnamese, U.S. and allies mostly by surprise when they attacked by night various command and control centers in the northern half of South Vietnam.

Rear Adm. Kenneth L. Veth, Commander, U.S. Naval Forces, Vietnam (COMNAVFORV), remembered during a 1977 interview, “The first thing we knew about it was when we were all waked up (sic) in the middle of the night, and all hell broke loose in the way of gunfire and explosions.” 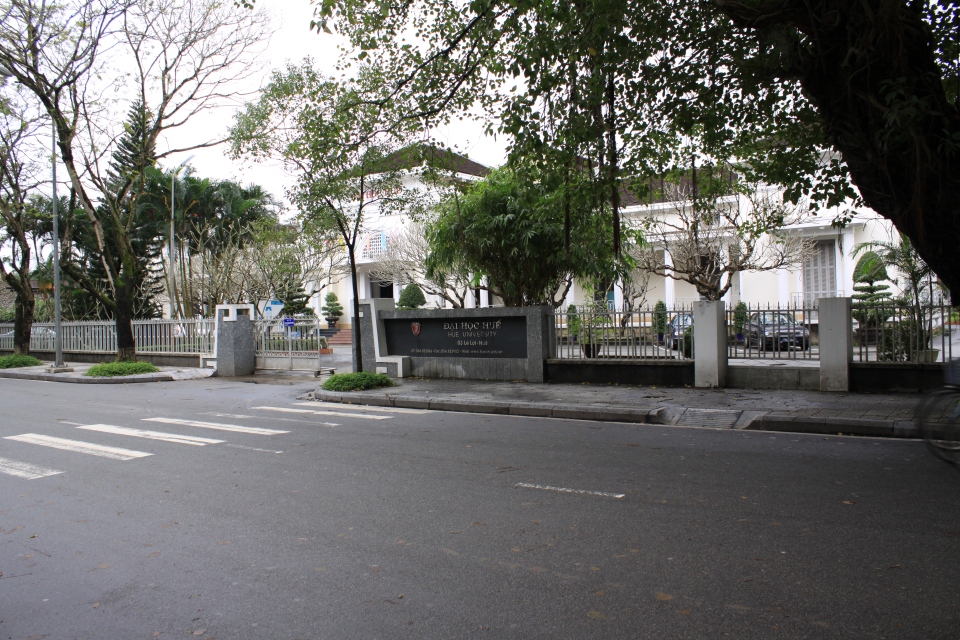 “Almost every spot that was an open piece of ground was under fire,” said U.S. Marine (then) Captain Myron Harrington, in a 1981 interview with the WGBH Educational Foundation. “You were almost in the face-to-face, eyeball-to-eyeball confrontation with the NVA. (…) As a result of their being so entrenched and utilizing the concrete type of buildings that we were running across, it required us to bring maximum fire power at our disposal to eliminate them.” Capt. Myron Harrington, added: “Street fighting was an entirely new experience for everyone in that company. Our last Marine Corps experience in street fighting had been in 1950 in Seoul, Korea. There were very few Marines left on active duty and those who were would have been too senior to participate in the Battle of Hue.“ 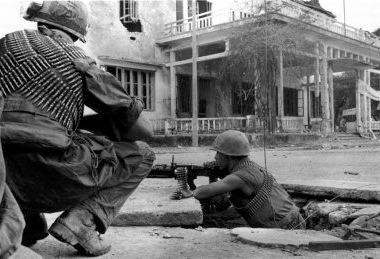 Interview from a vet during the battle for Hue. He was the one who medevaced Doc Howie (the medic in the hue photo)…

Hotel 2/5 was one of the last companies to arrive in Hue. They had gone to Hue by truck on Route 1. They were close to Hue when the lead truck hit a box mine. Meadows vividly remembers that there was a Lt. that just came from Khe Sanh and on his first day back was sent with the convoy to Hue. He flew up into the air and fell back down through the bed of the truck. Meadows took his squad around and didn’t realize that the Lt. was there until he came around the truck. Meadows stated that the flames were too intense, and he knew the Lt was dead, so he continued. Once arriving in Hue, Hotel 2/5 set up CP on the second floor of Hue University in the library. Meadows remembers clearing out the chemistry room since he “shot up all of the beakers.” Once in the library, Capt. Christmas told him that he wanted him to take his squad down to a yacht club.
Being a hillbilly from Kentucky, he asked, “What in the hell is a Yacht Club?”

Christmas replied a building where they had the boats and stuff. Just go straight down Le Loi St. Meadows didn’t want to take his squad because they were low on men, so he asked for volunteers. About ten guys volunteered, and they started stripping off all nonessentials, just ammo, and grenades. He also tried to motivate his men.

Again Meadows asked, “What the hell is a treasury?”

Christmas simply replied, “Where they make all of the money Meadows.”

Christmas wanted them to get on the roof, but there weren’t any staircases, so they shimmied up about 20 ft using lead pipes to get up on top of the roof. They used ropes to bring up 3.5 in rocket launchers and for an hour, they rained fire on the treasury which was to their bottom left. Meadows estimated that the roof was about 80 feet long and 8 ft wide. Well after awhile, two black guys in the squad, Pal and Smith, were firing an RPG through a crack in the wall about 3 ft wide. An NVA got an RPG right through the crack, and it exploded in the corner, blinding both men and cutting one of their throats. He pulled them off to the side where they lowered them down using ropes. He turned around just in time to see his RTO get shot, so he helped him out of his radio and lowered him down. Then a Lt.Myers told him to get the civilian off the roof. Apparently there was a Marine Sgt. who was a photographer and later helped write several Vietnam films. As he was moving toward the photographer, a mortar round landed and nearly knocked him off the roof, but it just knocked him out and put some shrapnel into him. 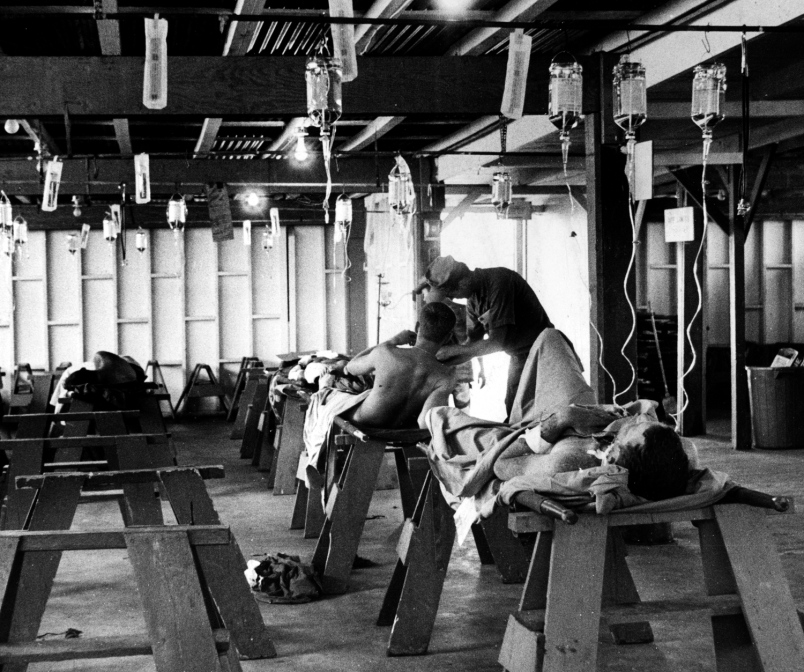 When he woke up, he was strapped to a stretcher and was being taken off a helicopter at Phu Bai. In the operating room they cut off his fatigues and by looking at his reflection, he saw that he head a head wound. He said that if he hadn’t been knocked out, he would’ve refused the medevac. So just about as they were going to operate on him, the NVA started hitting the base with everything they had. 120s, 122 rockets, etc. The nurses and doctors ran off leaving him still strapped to the stretcher on the table along with several other men. He saw Pal rip out the IVs from his arm and run butt naked to one of the bunkers. He said he couldn’t blame him.

As he was lying there, he wondered how he his mama was going to believe that he died in a hospital, strapped to a stretcher unable to move. Out of nowhere, a corpsman came back (by the way he would love to know his name) and started putting people under beds and on the floor. He went over to Meadows and flipped him over onto the floor with the stretcher still attached to him. He said that the attack lasted for about 20 minutes. That was how he ended February 3, 1968.

Parts of this article were also published on Argunners.com under the title, “Behind the Battle of Hue Photo” on Feb. 7, 2016.

This article is not considered an all-inclusive account of the battle for Hue.  However, in fairness, I’d like to point out that in addition to the Marines and 1st ARVN Division fighting against an estimated 14 battalions of enemy soldiers within the city, the 1st and 3d Brigades, 1st Cavalry Division, and the 2d Brigade, 101st Airborne Division also participated in the battle for Hue during the 1968 Tet Offensive. 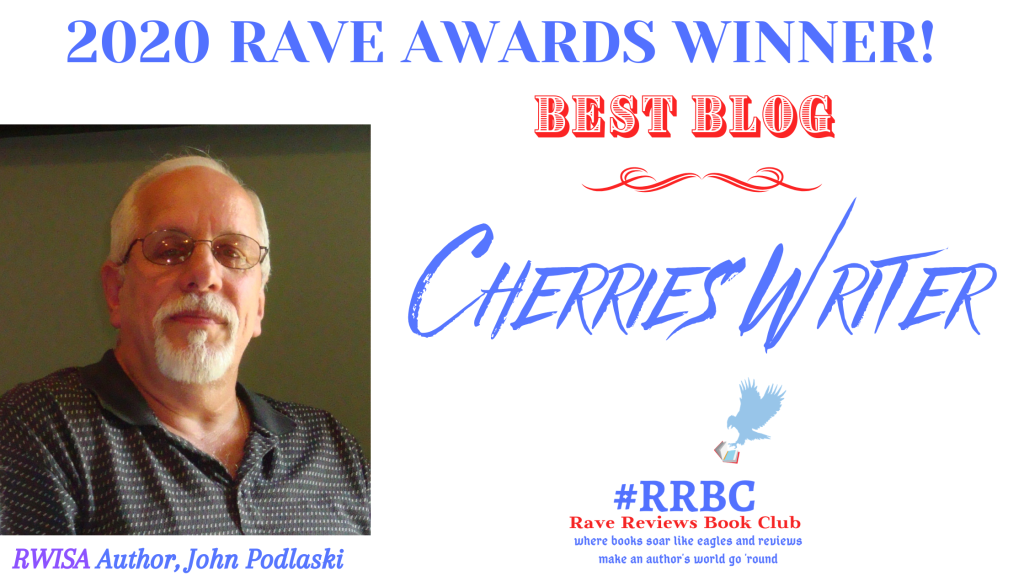