From May 21 to 25, 1971, Travis AFB experienced rioting resulting from tensions in the Airman dormitory area and the Vietnam War. One-hundred and thirty-five people were arrested, 80 of them detained overnight. The base had to call for police assistance from at least 70 officers from the civilian community.

TRAVIS AIR FORCE BASE — Like a storm on the horizon, the first signs of trouble came in the form of a loud stereo in the dorms and a black sergeant known as “Chief” in late May 1971.

When the storm broke late on May 22, 1971, resentment over the arrest of Chief erupted into a full-scale race riot that ended with one dead, 89 imprisoned and a building partially burned on the first night.

By the time things died down two days later, 135 military personnel were arrested – 25 whites and 110 blacks, of whom 89 were first-term airmen, according to a 1981 Air University Review article by Maj. Alan Osur.

The aftermath changed how the Air Force dealt with discrimination and race relations.

“There had been other incidents, but this was the most severe,” Langsford said. “The books call it a racial incident. Don’t be fooled. It was a full-scale riot.”

Back then, Langsford was a 21-year-old airman 1st class and a C-124 mechanic from Baltimore who enlisted in the Air Force to avoid the draft and to get out of the dead end he saw for himself.

“I was headed for trouble, like a lot of young black men in the cities. I needed the chance to see the world and grow up a little,” Langsford said.

The 1960s had been a time of racial unrest. The late 1960s also saw race riots in cities from Los Angeles to Chicago.

The Vietnam War became a source of that anger, with some joining the Air Force to avoid ground combat in Vietnam. Langsford said that many were furious at the world and carried that anger and militant stance through basic training. Blacks were also angry that they were being passed over for promotions, leave and assignments.

“There were a lot of leaders coming in then. They just weren’t the type to lead men or supervise maintenance bays. They were leading the fight for change. They were angry and saw violence as that way,” Langsford said.

Talking with blacks coming back from Vietnam also made Langsford and others think.

“You couldn’t get hair products or ethnic foods or decent service in the club, but you could go off to fight and possibly die. That didn’t seem right to us,” Langsford said.

Late on May 22, Langsford and his friends were outside Dormitory 1303 when a group of white airmen nearby turned on a stereo. Langsford remembers Chief walking across the road to tell them to turn it down.

“He wasn’t being nice about it. He was being more or less belligerent and that’s what got him into trouble,” Langsford said.

Chief and one of the airmen started fighting and others joined in. Security police showed up to detain Chief and another airman. Later, word spread that the airman was let out but Chief was still being detained.

“Someone said, ‘Let’s get him out of there,’ and we thought it was a good idea, off we went,” Langsford said.

The group collected more black airmen as it flowed toward the base detention facility. Langsford remembered families on the baseball fields scooping up their children and running off as the growing mob plowed by.

“Nothing was standing in our way,” Langsford said.

Nothing, until they reached the intersection near Irwin Hall. That’s where a line of Air Force security police with bayonets fixed to their rifles were drawn up to stop them. The police charged and the group started running back to the dorms. 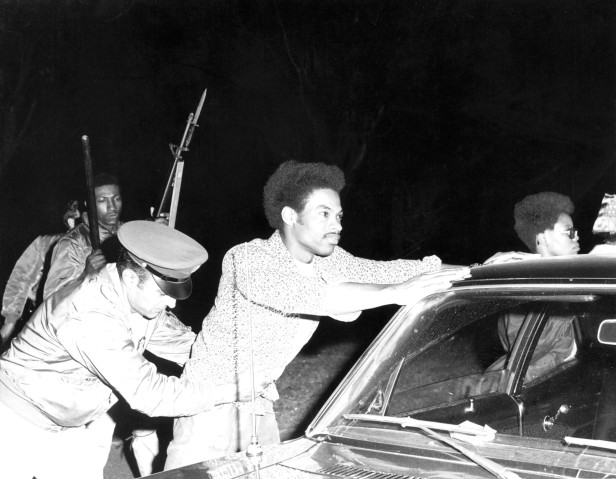 The Air Force had even put out calls for help from surrounding police departments. Solano County Sheriff Al Cardoza called in 74 civilian police, who came from as far away as Napa.

Langsford was one of those grabbed and thrown to the ground as police cleaned out rioters from the dorms. He and others ended up detained in a large open court surrounded by a high fence.

“It’s funny,” Langsford said. “In the pen, no one was fighting. We were all mixed in, whites and blacks, and no one fought, no one accused. We were all the same again. We were all airmen in trouble.”

By the time the troubles sputtered out on May 24, 1971, 30 people were injured, including a lieutenant colonel who was badly beaten when he tried to break up the riot.

By 1973, when Armijo High School graduate Bill Mackie joined the Air Force, he said the Travis riots were a topic of mandatory race-relations classes.

Langsford said that Air Force social actions instructors said the Travis riots were that needed final push to get the Air Force to address the problems of race relations.

“We had the social actions program in place, but no one used it,” Langsford said. “It sat on the shelf, gathering dust. The leaders were interested in the war, not race relations. The riot changed all that.”

At the press conference after the riots, 22nd Air Force commander Maj. Gen. William Moore told reporters, “We know there are black men on base with just grievances and we want to know what those grievances are.”

Within two weeks, Moore set up a Human Relations Council to investigate and take action on the reports of discrimination. On July 1, an action line was established, and a month after that, a social actions officer was added to the wing staff. New policies on race relations and discrimination were not far behind.

This article originally appeared on the following website: https://www.dailyrepublic.com/all-dr-news/solano-news/solano-county/1970s-race-riot-rocks-base/

7 thoughts on “Race riot rocked Travis base in early 1970s”