For Mother’s Day, I thought it appropriate to repost an earlier article from 2015 about Martha Raye. At the time, I was surprised to find out that many of my readers were not aware of Ms. Raye’s many visits to Vietnam and what she did while there…many times at her own expense. So happy Mother’s Day to the “Meanest Mother” of the Vietnam War.

Martha Raye. known as “The Big Mouth” was considered the female equivalent to Bob Hope, Martha Raye was an American icon. It was well recognized that Martha Raye endured less comfort and more danger than any other Vietnam entertainer.

“Colonel Maggie,” Martha Raye, was an honorary member of the Special Forces.  She had received her prized Green Beret and the title of Lieutenant Colonel from President Lyndon B. Johnson, himself.

From 1964 to 1973, Martha traveled from camp to camp in isolated areas throughout Vietnam making eight (8) visits.  She would stay “in-country” from four to six months at a time–usually at her own expense–to be with the troops she so dearly loved. She used the nurse’s aide skills she learned back in the 1930s, and surgical techniques she picked up during World War II to help treat the wounded.  Whatever her official nursing qualifications, her assistance was often needed and very much appreciated.  Her presence, whether as an entertainer or as a nurse, helped to make life bearable for so many enlisted troops and officers.

Martha was wounded twice during her visits with the Green Berets.

In May 1965 Martha began the first of her eight USO tours of Vietnam, visiting military camps and outposts.  She was accompanied by Earl Colbert, a guitarist, and Ollie Harris, a bass fiddle player. During one of her visits, she was performed with Johnny Grant, Eddie Fisher, and John Bubbles.

…to entertain our armed personnel wherever they needed a laugh, a song and a touch of home. 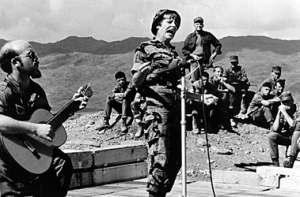 In October that year, Martha was back in Vietnam with the USO for another six weeks. Until America ‘s withdrawal in 1974, Martha toured in Vietnam at least annually, sometimes with the USO (1965-1970) but most often on her own and at her own expense.

She was reported to have made several jumps from planes and helicopters. She received an Airborne Beret. BUT the Green Beret was what she wore the most.

I did not know this.  Don’t let the sun go down without reading this about Martha Raye. The most unforgivable oversight of TV is that her shows were not taped. I was unaware of her credentials or where she is buried. Somehow I just can’t see Brittany Spears, Paris Hilton, or Jessica Simpson doing what this woman and the other USO women, including Ann Margaret & Joey Heatherton did for our troops in past wars.  Most of the old-time entertainers were made of a lot of sterner stuff than today’s crop of activist bland whiners. The following is from an Army Aviator who takes a trip down memory lane:

“It was just before Thanksgiving ’67 and we were ferrying dead and wounded from a large GRF west of Pleiku. We had run out of body bags by noon,  so the Hook (CH-47 CHINOOK) was pretty rough in the back.  All of a sudden, we heard a ‘take-charge’ woman’s voice in the rear. There was the singer and actress, Martha Raye, with a Special Forces beret and jungle fatigues, with subdued markings, helping the wounded into the Chinook, and carrying the dead aboard. ‘Maggie’ had been visiting her SF ‘heroes’ out ‘west’. We took off, short of fuel, and headed to the USAF hospital pad at Pleiku. As we all started unloading our sad pax’s, a  USAF Captain said to Martha…. “Ms Raye, with all these dead and wounded to process, there would not be time for your show!”To all of our surprise, she pulled on her right collar and said …… “Captain, see this eagle?  I am a full ‘Bird’ in the US Army Reserve, and on this is a ‘Caduceus’ which means I am a Nurse, with a surgical specialty…. now, take me to your wounded!” 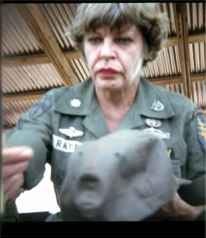 Several times at the Army Field Hospital in Pleiku, she would ‘cover’ a surgical shift, giving a nurse a well-deserved break.

Ms. Noonie Fortin  is Maggie’s biographer and author or the book, “Memories of Maggie”.  Ms Fortin is a First Sergeant, (Retired), U.S. Army and retires with over 22 years of military service to our great country.  Noonie met with Martha Raye many times in order to write and finish this book, eventually becoming friends with Martha.  She also created a website dedicated to this entertainer and has amassed a huge collection of memorabilia spanning her entire career – the pictures below are part of that collection.

The Vietnam Experience website and Vietnam Veteran Support Network Board wants to recognize your wonderful efforts at promoting and preserving the history of the Vietnam experience. You honor all veterans with your writings. Now we wish to honor your work, including your contributions at calling attention to Martha Raye.

Proudly display this website award on any and all of your websites. This award is given on this day – January 28, 2003 to the Noonie Fortin — Colonel Maggie Website

On behalf of the entire staff and Board of the Vietnam Experience,

First up is a photo that was donated by Kenneth Roberts. It is one of my favorite photos of Maggie that was taken in Vietnam. This truck became well known in the BanMeThout area in 1971. Photo was actually taken by Chris Crain! 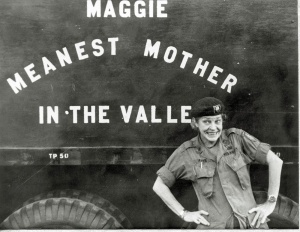 Maggie got around by many modes of transportation during the various wars. This picture became her favorite way to travel–on board a chopper. Photo donated by John Mitchell and taken in AnLoc in 1969.

The next picture was sent to me by Tom “Stumpy” Burke. It’s him, Maggie, and Neil Coady at the II Corps Mike Force “Yard” village near Pleiku in 1969. 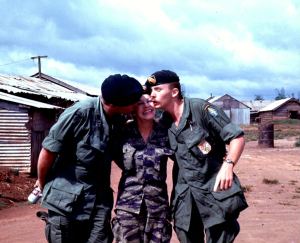 The next two photos are a bit scratchy but still show Maggie’s caring for our troops. These photos were emailed to me by Bob Waller who said they were taken in late 1968 or early 1969 at the 5th Special Forces Group C-Team Officers Club in DaNang. The photo on the left includes L-R: USAF FAC LTC Ralph Albright behind the bar, and unknown soldier smoking, LT Bill Glendenning, Maggie, and LT Bob Waller. The picture on the right was taken the same night and that’s Maggie next to LT Bob Waller. 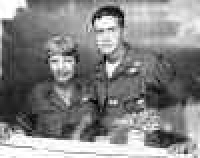 In 1968 T/SGT Jeffrey Saddlemire had the absolute pleasure of being selected to present Maggie with flowers at the end of a USO show. He will never forget meeting “what a very sweet lady she was” at Tuy Hoa. He stated that “God has a special place in heaven for people like her. Rest in Peace job well done Maggie!” 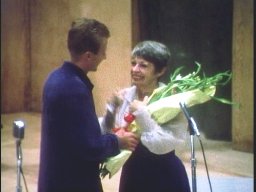 Maggie visited many units. One-stop was on 2 November 1968 in DucCo. There she posed with CSM Guy Sullivan (on the left) and SP4 Kelley from the 1st Bn, 35th Infantry, 4th Infantry Division.

Maggie flew into LZ Center (Hill 348), about 40 miles Southwest of DaNang, in 1968 to visit members of the Americal Division’s 3/21 Light Infantry, Company D–a.k.a. Black Death. This photo was submitted by Robert Boyd Jr. He is standing in the back on the right and his friend “Beard” is in the front holding his helmet upside down. Beard’s helmet was spotted by Maggie when she saw the words “F*** THE ARMY” written on it.  Recently Larry Henderson wrote saying that the soldier to Maggie’s left is Clarence W “Chief” Stoneroad from Oklahoma. Larry was working at the time in the bunker at the right rear of the photo. He said her visit was greatly appreciated by all the guys there. 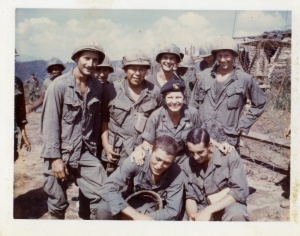 Whenever she saw a soldier, sailor, airman, marine, or coast guardsman without a St Christopher medal–she would hand him or her a brand new one. She got them from Chaplin CPT Michael Ortiz who donated this picture taken of him with her in 1968 while they were in NhaTrang.

John Wayne narrates this 1970 documentary which featured Gen. William Westmoreland, Lowell Thomas and others. Martha Raye was included to speak about her efforts to entertain our armed personnel wherever they needed a laugh, a song and a touch of home. Maggie was there simply to build morale just as she would be doing today if she was still around.

In 1993 Martha Raye was awarded the Presidential Medal of Freedom for her lifetime service to America .

Her final years were plagued by ill-health. She suffered from Alzheimer’s disease and had lost both legs in 1993 from poor circulation. While in poor health and resting in the hospital bed, that had to be placed in her home, Martha and husband Mark Harris moved into a hotel after their home was completely destroyed by the 1994 earthquake. Raye died in Los Angeles at 78 of pneumonia on October 19, 1994 after a long history of cardiovascular disease.

In appreciation of her work with the USO during World War II and subsequent wars, special consideration was given to bury her in Arlington National Cemetery on her death, but on her request, she was buried with full military honors in the Fort Bragg, North Carolina post cemetery as an honorary colonel in the U.S. Marines and an honorary lieutenant colonel in the U.S. Army. She is the only civilian buried at this location who receives military honors each Veterans’ Day. 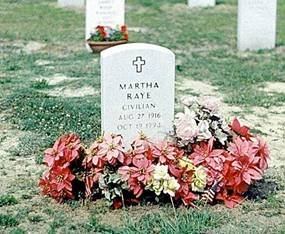 Raye has two stars on the Hollywood Walk of Fame, one for motion pictures at 6251 Hollywood Boulevard and the other for television at 6547 Hollywood Blvd.