Skip to content
Date: July 8, 2019Author: pdoggbiker 6 Comments
The American experience in Vietnam was a long and painful one for the nation.

For those against the war, it appeared to be a meat grinder for draftees, unfairly targeting the poor, the uneducated, and minorities.

For those in favor of the war and those who served in the military at the time, the American public and media were (and still are) misled about what happened during the war and so feel betrayed by many at home (Jane Fonda is the enduring symbol of the cultural schism).

The facts not in dispute by either side are just as harrowing: Over 20 years, more than 58,000 Americans were killed in Vietnam and more than 150,000 wounded, not to mention the emotional toll the war took on American culture.

The war ended the Presidency of Lyndon Johnson and left a lasting impression on Richard Nixon’s. It was the backbone to the most tumultuous period in American history since before the Civil War one century prior.

The other facts are not so clear. We are at the sixty-year mark for the start of the war, so soon more and more government documents from the period will be declassified. We will learn a great deal about this time in American history. Right now, however, the misinformation, cover-ups, and confusion about Vietnam still pervade our national consciousness. Right now, we can only look back at the war and take stock of what we know was real and what was B.S. from day one. 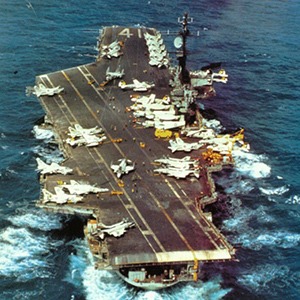 1. At the end of the Vietnam War, the USS Midway crew pushed $10 million worth of helicopters into the sea so that a Cessna full of evacuees could land on the deck. – Source

2. Hugh Thomson, the man who during the Vietnam War had landed a helicopter in the line of fire to confront and stop American troops who had by that point killed close to 500 unarmed civilians in the My Lai Massacre, was labeled a traitor by Congress and ordered not to speak about the event – Source

3. The Vietnam War is known as “the American War” in Vietnam. – Source

4. In 2005, NSA documents were declassified that proved that the second Gulf of Tonkin incident, which was used as a justification for the Gulf of Tonkin Resolution (which led to the Vietnam War), never happened. – Source

5. In 1967, protesters in USA requested a permit to levitate the Pentagon 300 feet in the air, through songs and chants, to exorcise it of its evil and end the Vietnam War. Authorities agreed to only 3 feet. – Source

6. Slinkys were used in the Vietnam War as mobile radio antennas. They would sling the Slinky over branches and extend the range of their radios. – Source

7. During the Vietnam War, an estimated 125,000 Americans fled to Canada to avoid the military draft. Around half returned to the US when President Carter, in his first day in office, granted them amnesty. – Source

8. Medal of Honor recipient Peter Lemon was high on marijuana when he single-handedly fought off two waves of Vietcong troops and dragged a wounded soldier to safety – Source

9. During the Vietnam War, the US military produced recordings of ghostly voices and eerie sounds to play to the Vietcong, who believed that if a body wasn’t buried, the person’s soul would wander the Earth forever. – Source

10. There was a false belief during the war that the Vietnamese had a superstition with the Ace of Spades card, considering it to be a symbol of death and that they would flee at the sight of the Ace. Therefore the U.S. Playing Card Company shipped crates of this card to Vietnam, where they were scattered during raids in an effort to terrify the Vietcong. – Source

11. The shooter in the infamous Vietcong execution photo opened a pizzeria in suburban Virginia after the Vietnam War. A lot of people see this picture and think he’s the bad guy, but really he was executing a Viet Cong officer.- Source

12. A prisoner of war during the Vietnam War named James Stockdale is said to have survived in such arduous conditions that you must renounce optimism for stoicism. His optimistic fellow captives all died. Having a blindly optimistic view worsens your chances of survival. This is called ‘The Stockdale Paradox’. – Source

13. During the Vietnam War, a US task force known as ‘Tiger Force’ routinely cut off the ears of its victims to make necklaces from them. – Source

14. When Colonel “Chappie” James was Vice Wing Commander under legendary ace Colonel Robin Olds during the Vietnam War, they were known as “BlackMan & Robin.” – Source

15. During the Vietnam war, Navy Seal teams One and Two amassed a combined kill/death ratio of 200:1. – Source

17. During the early 1960s, there was a ‘Secret War’, where the CIA recruited 50% of the Hmong population to fight for the US in the Vietnam War. Afterwards, they were completely abandoned. – Source

19. A ‘liquid land mine’ was invented during the Vietnam War, which was poured on the ground to form a mine, and best of all, it self-deactivated in 4 days, keeping kids safe from unfound mines. – Source

20. An Air Force Sergeant during the Vietnam War created an “underground” radio station in the back of a Vietnamese brothel where he played hard rock, made vulgar jokes and openly opposed the war. The radio station was operated on channel 69. – Source

21. Roy Benavidez, a US soldier in the Vietnam War, performed possibly the most heroic six hours of battle any soldier ever has. When faced with over 1,000 NVA troops, Roy P. Benavidez flew into a gunfight to save 12 Special Forces soldiers with only a knife. He was shot multiple times and believed dead, until he spit in the face of the medic trying to put him in a body bag. It took 13 years to get him the Medal of Honor. – Source

22. During the Vietnam War, a US Prisoner of War was forced to do a press conference saying that they were treated well. He managed to convey the truth by blinking “TORTURE” in Morse code. – Source

23. Super glue was used during the Vietnam War to slow bleeding until soldiers could get to a hospital. – Source

24. During the Vietnam War, one unconventional technique used by the United States against the Viet Cong was replacing their ammunition with decoy explosive ammunition, which destroyed their weapons when fired. – Source

25. Richard Nixon is suspected of sabotaging the Paris Peace Accords, extending the Vietnam War by five years to ensure his own election. – Source

Check out an earlier post on this website with 17 additional “wild facts” about the Vietnam War.  Here’s the direct link:  https://cherrieswriter.com/2016/04/05/17-wild-facts-about-the-vietnam-war/

This article was originally published on kickassfacts. Here’s the direct link: https://www.kickassfacts.com/25-interesting-facts-about-vietnam-war/

6 thoughts on “25 Interesting facts about the Vietnam War”