Wikipedia describes Nose art as a decorative painting or design on the fuselage of a military aircraft, usually chalked up on the front fuselage, and is a form of aircraft graffiti.

While begun for practical reasons of identifying friendly units, the practice evolved to express the individuality often constrained by the uniformity of the military, to evoke memories of home and peacetime life, and as a kind of psychological protection against the stresses of war and the probability of death. The appeal, in part, came from nose art not being officially approved, even when the regulations against it were not enforced.

I’ve attached hundreds of unique color photos Huey’s, Chinooks, and more, showing how soldiers decorated their helicopters during the Vietnam War.  Most are elaborate, colorful, and often comical art inspired by Sixties and Seventies pop culture, music, cartoons and comics, psychedelia, and politics, as well as sex and booze.  The artwork personalizes an aircraft for its crew, because it is the crew members who name the aircraft and create the art, christening it with an identity of its own.

I’d like to offer a special “Thank You” to John Conway for allowing me to share many of these pictures from his Vietnam Helicopter Pilots Association (VHPA) Museum – donors of individual pictures are credited below.  The museum website is chock full of pictures, stories and other aviation information from the Vietnam War. The museum continues to grow and John welcomes any donations of images, stories or memorabilia for inclusion into the website and live exhibits. Please make it a point to visit the museum in the near future at : http://museum.vhpa.org/defaultmenu.shtml

Quite a few pictures in the SLIDE SHOW below are not identified by unit or have additional info about the artwork.  If you can identify and provide that information, please get back to me.  Also, if anyone wants to contribute personal pictures of their ship’s artwork (Vietnam era) and back-up information, I’d be honored to add them to this article.  You can also mention whether or not I can forward copies to John Conway for the museum.

Hank Llewellyn Interestingly, the photo, “71 AHC Rattlers – Image courtesy of Jim Adams, 1st Platoon Leader, Dec 68 – Dec 69” is of Medal of Honor recipient Col. Bruce Crandall’s door art. It was painted by CWO Sid Cowen. The doors adorned, then Major Crandall, Huey into the battle of the Ia Drang Valley, Nov 1965. The blue triangle indicates Alpha Company of the 229th AHB. The coiled serpent is formed in the shape of a “6” re: “Serpent 6” Crandall’s call sign. Photo is on display in the Pentagon “Hall of Hero’s”. Bruce returned to VN in1967 but was unable to locate the old doors that were refitted to each Huey he flew.

The 174th Dolphins, the “slicks,” adopted the above nose-art logo in mid-1967 that became a standard for several years. While there were a few individualized drawings used for nose-art on Dolphins, both before and after the ones depicted here, none were known to have been used on more than one aircraft at a time.  Photo by Jim McDaniel, 1967. 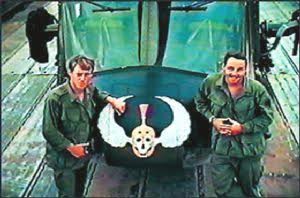 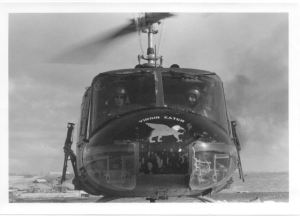 We used the Griffin call sign for the UH-1’s and the Little Griffin call sign for the LOH’s. I recall, some time before I left in 69, that we had to give up the Griffin call sign because some other unit was using it. One of the nose paintings was “Virgin Eater”. Another was “Cherry Popper.” This was based upon the logic that the mythical griffin only ate virgins – a perfect theme for young male pilots. Pilots’ names in this shot are; left as you face the chopper – CWO Bruce Sutton, and right as you face the chopper – CWO Richard Vonhatten.  Image courtesy of Pete Rzeminski, CW2 (8/68 – 12/69), HHC (Avn Det), 1st Brigade, 101st Abn Div. 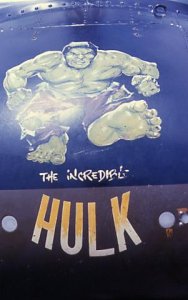 “The Incredible Hulk” of the 121st AHC – This ship had some reason to be slung back to Soc Trang. On down wind it began to oscillate and the Chinook had to punch him off at about 300 feet. With about 40 guys watching including the AC. I had my camera and for the life of me don’t know why I wasn’t taking pic’s. Dam! makes me sick everytime I think about it. Image courtesy of Lowell L. Eneix.

D 3/5 OH-23 “Raven” featuring nose art of the “Spooks” Scout platoon (circa 1967). The “Spooks” were the predecessors of the Warwagons and possibly the only unit to fly the Raven in combat.  Image courtesy of Richard Bench 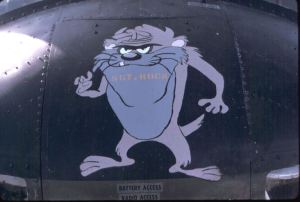 This piece of Nose art lasted less than a month. This helicopter’s crew chief was the pilot NCOIC for the Aero rilfle plt’s birds. His name was SFC John R Rock. (AT this time the Sgt Rock Comics were hot). D/1/1 had deployed from Fort Hood to join with our parent squadron 1/1 Armored Squadron assigned to the American Div in Chu Lai. Enroute our orders were changed attaching the troop to 2/17 Cav, 101st. This was the period of time when the division went from Airbone, to Airmobile and back to Airborne (Airmoble) in less than 2 months. We had the first Cobras attached to the division and 1st Avn Bde units supporting the 101st were redesignated as 101 units . The Division had become the Army’s second Airmobile Division As soon as the change was “Officially Completed” The word came down from Division Hqs there would be no Nose Art in the division and Sgt Rock disappeared. Image courtesy of Ray Knight 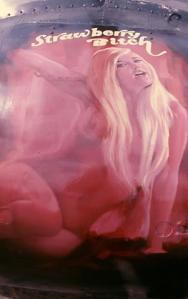 “Strawberry Bitch” of the 121st AHC (Namesake of the B-24 now in the US Air Force Museum at Wright-Patterson AFB in Dayton, Ohio – ” I am pretty sure the pilot of that AC was the SON of the pilot who flew the B-24 on display at Wright-Patterson. Our company commander made him change it from “bitch” to “blonde” didn’t want any “nasty words” being displayed. So this just might be the only picture of the original “Strawberry Bitch” of the 121st” – Lowell Eneix     Image courtesy of Lowell L. Eneix

Casper Aviation Platoon was the only separate aviation platoon in the United States Army during the Vietnam War.  Casper was organized with the 173d Airborne Brigade on Okinawa in 1963 and arrived in country with the Brigade on May 5, 1965 becoming the first United States Army ground unit committed to the Vietnam War. Casper Platoon supported the Brigade until they all left Vietnam in August 1971.

“The nose art is basically the standard design of several of our Huey’s but I added the name “Tumbleweed”. That’s what I called my ship.   The door art was a take off of a Sunday morning cartoon character. My CE at that point was a Sergeant John Sulfridge. We had to sneak the parts down town and have the art work done. I sent him in while I waited in the jeep. That was a mistake as you see my last name is misspelled. I was with D-Troop 3/5th From Sept ’70 to ’71. We changed our Unit to C 3/17 sometime before I left. I was the “Slick” Platoon Commander “Long Knife 26”.  Image courtesy of Mike Rokey

Don’t forget to visit the VHPA museum in the near future at : http://museum.vhpa.org/defaultmenu.shtml

3 thoughts on “Nose Art during the Vietnam War”