Let me introduce my guest poster for this article, Mr. Richard Grassa.  He served in Vietnam as an infantryman with 2nd Plt, B Co, 1st Battalion, 1st Marines (1/1) in 1969.  After his stint in the Marines, Rick worked at Lockheed Martin as an engineer, remaining there until his retirement in 2010.  He and his wife of 46 years live in central Pennsylvania.

Richard contacted me via his response to my last article on one of the Vietnam Group pages and mentioned that in the Nam, he had participated in an ambush and thought he knew what fear was like, but found he wasn’t even close.  He later wrote a short paper about that night, which is published here:

WARNING:  THIS ACCOUNT MAY BE TOO GRAPHIC FOR SOME VETERANS…

Early in the evening on March 5, 1969, 14-miles south of DaNang, and 8-miles east of Hill 55 near the Village of Ngan Cau,  I sat in a hole on the edge of a sand dune where our platoon had set up a defensive perimeter for the night.  I had first watch.  Perry Lumpkins was laying behind me in a narrow trench he scratched out trying to get some sleep.  Barely 15 minutes had passed when our squad leader ran up and told us to grab all our ammo, a canteen and be ready to move in 5 minutes.  Perry and I tossed the remainder of our gear in the hole, covered it with a poncho, then kicked sand over it.  When we assembled we were told the guys in a road tower 5 clicks to our north had reported 8 to 12 VC crossing the road and moving south in our direction. Battalion HQ had ordered us to abandon our position and set up a hasty ambush.

At 7:30 PM we moved quickly off the dune and traveled 500 yards east where we set up an L shaped ambush.  Poncho with his M-60 machine gun was centered in the long side of the L while Perry and I were on the end of the same side.  There was an old rice paddy dike in front of us that offered a little cover.  We laid a green towel on the dry cracked dirt in front of us and set a half dozen magazines and a couple grenades on it then settled down to wait.  If all went as planned a dozen VC would enter the L moving from our right  to left and once deep inside the kill zone, 34 unseen Marines would open up and in 15 seconds it would all be over.  Time passed slowly.  I couldn’t shake the thought that the road was behind us.  If I was right, our ambush was set up for an enemy moving east, not south.  If I was right, and the VC were moving south, they would come from behind us and there would be no kill zone.  Perhaps there was information I didn’t have, perhaps I was wrong.  I remember thinking they should have made it this far by now, maybe they turned around or changed direction.

A faint sound made me turn my head to look behind us.  In the dim light of the stars, I saw a VC soldier approaching followed by a long line of NVA regulars.  It was all wrong.  The enemy was coming from behind us – moving perpendicular to our ambush line, thus, neutralizing our kill zone.  If they continued moving in a straight line, this much larger group would soon be passing to my right with only 15 yards separating us.  In the stillness I could hear the sound of their boots.  As they came steadily closer, I was sure they’d hear my heart pounding or see Perry’s leg which was bent at the knee, foot sticking straight up.  My mouth was suddenly very dry.  I thought I knew what fear was…I wasn’t even close. 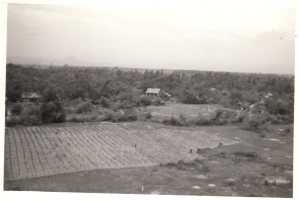 The lead VC was to my immediate right when Poncho yanked the trigger on his M60.  Perry and I emptied our first magazines sweeping the column.  I threw a grenade toward the confusion – then all hell broke loose.  Perry said, ‘I’m hit, my leg.’  I pulled the dressing from his helmet and felt his leg.  The back of his calf was gone.  After pulling him over the dike I tied the dressing in place and yelled for Doc.  Five VC came running across the wide open dry rice paddy toward the middle of the L.  Four went down, the last turned and disappeared into the darkness.

By chance, luck or providence we had an Army FO with us.  He began calling in artillery 360 degrees around us and marched it in to within 40 or 50 yards.  Add to the mayhem, the angry buzz of shrapnel passing overhead and thudding into the dike.  A fleeting thought, ‘I might die right here.’  I flipped a grenade over the dike just in case and kept picking out muzzle flashes to shoot at.  They seemed to be everywhere. 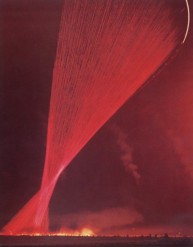 Sometime later I heard the drone of a prop aircraft as it circled above.  POOF, the biggest flare I had ever seen lit up the area then the red rain began to fall (every fifth round on a belt of ammo is a tracer round which is visible as a solid line when fired at thousands of rounds a minute).  I didn’t think anyone could survive that onslaught, but as Spooky turned for DaNang, another group of VC rose and started across the paddy straight toward Poncho’s machine gun.

They all went down.  Spooky returned and left two more times, the FO kept pounding away, and the firefight raged through the night.  A lifetime later the sky began to lighten.  As quickly as it started the shooting stopped.   A small sip of water and a smoke, my hands were shaking.  Had the enemy realized we were but a platoon they might have assaulted us en mass which would have ended the fight quickly.  The rest of Bravo company and another company from our battalion, soon showed up and began sweeping the battleground.  They found dead and wounded VC which were left behind, and ascertained that all the NVA bodies were carried away as none remained.  The brass soon came up with an estimated number of enemy KIA.

2nd Platoon Bravo Co 1/1 was awarded the Killer Hunter Flag which I’m holding in one of the photos.  Incredibly we only sustained 1 wounded – Perry Lumpkins who was hit during the initial contact.  He was Medevac’d at first light, and just like that, my best friend disappeared.  I never did see him again and have searched off and on for 38 years.  I had to write this from my perspective but it’s not about me, it’s a story about one night in 1969.

From the Battalion “After Action Report:”

It is a miracle that this single platoon survived and was not overrun by a much larger force!  Thank you brother for allowing me to publish this on my website.  Thank you, too, for your service…and Welcome Home!  Semper Fi!