So much has transpired during the 60’s and 70’s, a new generation was born and being a Vietnam Veteran was extremely unpopular during that time.  Thousands of stories have been told of their treatment upon returning home from this unpopular war; protesters heckled and disrespected them, friends stopped being friends, complete strangers felt violated in their presence and employers made it difficult to find jobs and would not hire them.  Many veterans hid in the shadows, keeping their Vietnam experiences to themselves – secrets, if exposed, would negatively impact them one way or the other. Not every vet was treated the same, many enjoyed positive experiences since returning home – picking up right where they left off and building a wonderful life for themselves and their families.

Something in the air changed once the 80’s rolled around.  Vietnam Veterans of America was formed in 1978 and chapters began springing up all around the country.  I joined Chapter 154 in Mt. Clemens, MI in 1984, and felt a great relief, almost like being reborn after the first monthly meeting.  I was surrounded by veterans of every branch of the service, all close in age and strangers, yet I felt a special closeness to these men.  We were coming out of the closet and it was time to roar!  As the membership grew, we formed a color guard (I was a charter member), and marched in many of the local parades, winning 1st place trophies in most every event.  Spectators treated us with respect, standing when we passed and giving us a wonderful ovation.

In November of the same year, the Wall in D.C. was unveiled and dedicated.  This was a powerful monument!  One that I felt started to bring the country back together again!  Chapter 154’s Color Guard and other chapter members rented buses and traveled to D.C. for a two-day adventure.  We presented wreaths at both the Wall and at the Monument for the Unknown Soldier.  Visitors supported us during these two ceremonies and once again, there was an outpouring of love and respect.

June 12, 1986, our chapter members and Color Guard traveled to Chicago to participate in the scheduled “WELCOME HOME VIETNAM VETERANS” parade the following day. 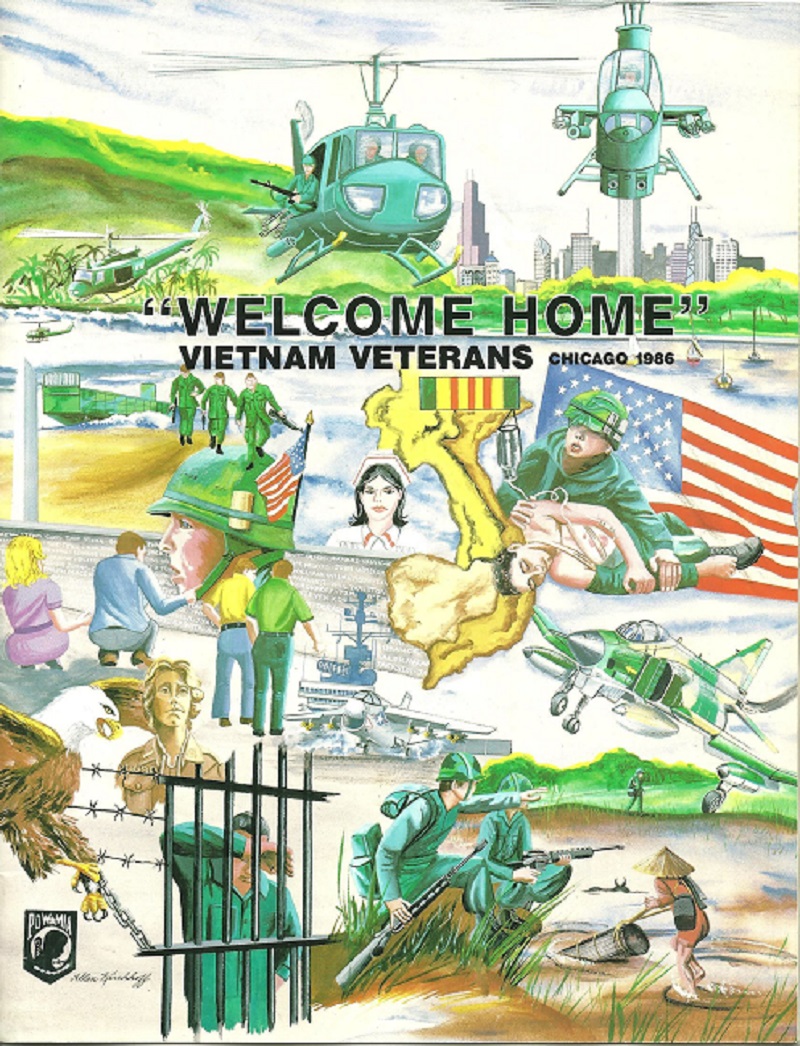 Friday promised to be a day of discovery and awesomeness – the excitement began bright and early.  The Color Guard had exited our hotel and stood on the corner brainstorming about how we were going to get to Navy Pier, a few miles away.  Walking there was not out of the question, but there wasn’t enough time before the parade started.  Picture this, fourteen of us standing there in full camouflage fatigues, berets, buckled cartridge belts, division patches, flags and M-1 Carbines with loaded magazines.  Of course, those “civilians” in the immediate area began moving away, giving us room, when suddenly, several Chicago Police cars came out of nowhere converging on our corner.  Dumbfounded, we stood perfectly still and didn’t have a clue as to what was wrong. After several moments of discussion and once the officers verified that all the rifles were “fixed” and could only fire blanks, they arranged to send a paddy wagon to transport us to Navy Pier.  I’m certain it was an act of kindness, but most likely was arranged to not upset more of the city’s citizens – some were probably unaware of the parade! 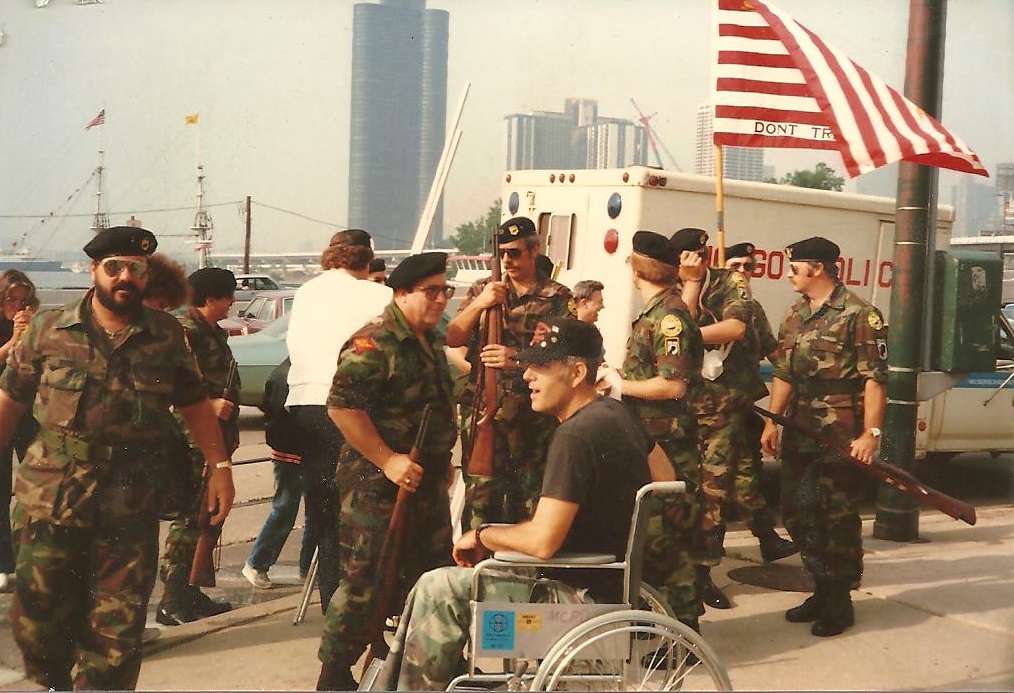 The Navy Pier was jam packed by the time we arrived, more groups continued arriving by the busload.  Because of the congestion, the parade started 1/2 hour earlier – General Westmoreland and two legless veterans leading waves upon waves of veterans through the loop.  The veteran on the General’s right was pushed along the route in his wheelchair (forgot his name).  The other, Bob Weland, a forty year old former medic, lost his legs to a booby-trapped mortar round two months after arriving in 1969.  Ironically, he was ready to sign a contract to play major league baseball with the Philadelphia Phillies when his draft notice arrived.  Nevertheless, Bob was determined to march the entire parade route and do so his own way.  That meant pulling himself along with his hands, dragging himself upright, the bottom of his torso fitted with a specially fitted pad.  Westmoreland later complained that at times, he had to hustle to catch up with the former medic after falling behind.  Bob later went on to walk across the United States the same manner to raise funds for charitable organizations.

Veterans carried banners of all kinds, most were organizational, either of military units or individual chapters of national organization like ours:  “VVA Chapter 154”, carried by family and chapter members who followed behind the Color Guard.  One that caught my eye in passing read, “There are no Strangers here, only friends we haven’t Met.”   Crowds were sparse initially and began to thicken the closer we came to LaSalle Street, so did all the emotions! 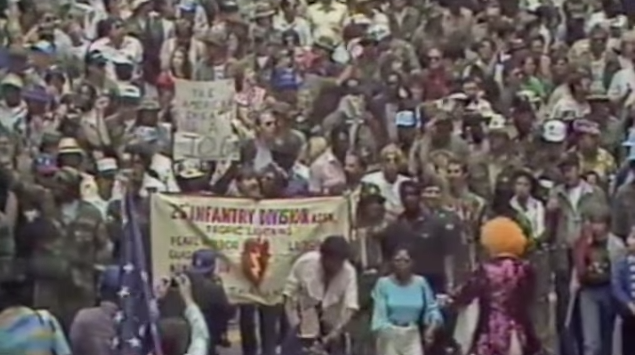 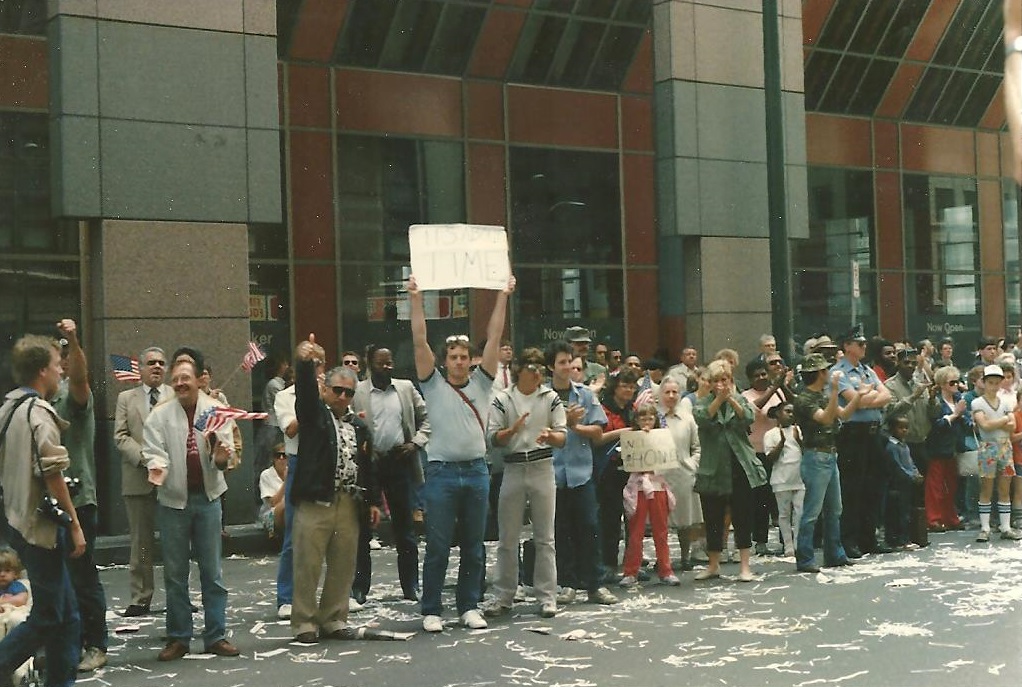 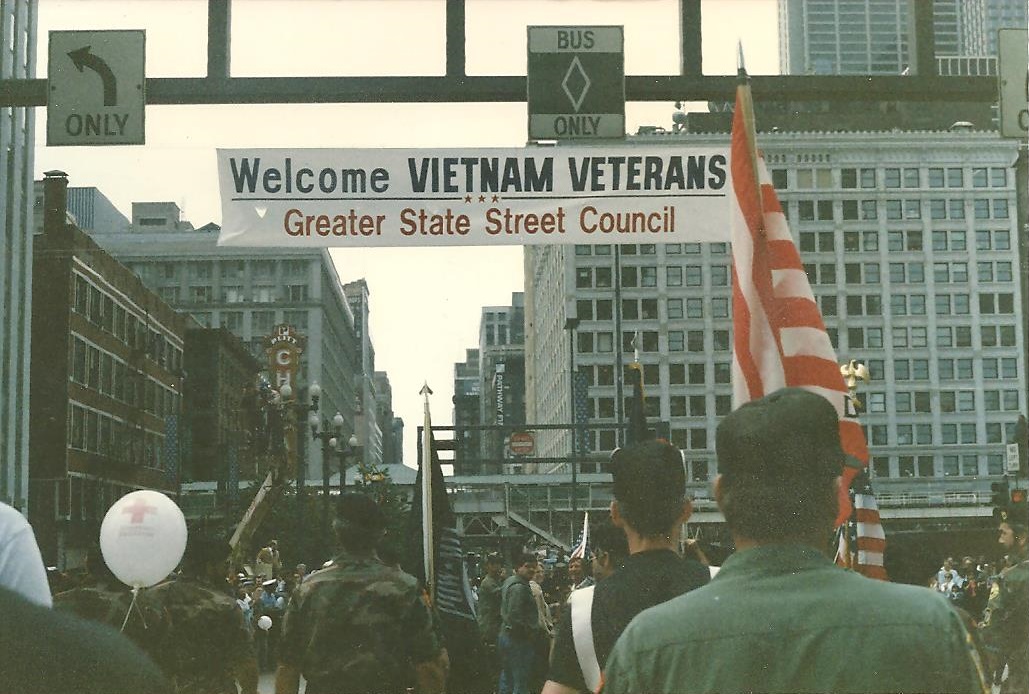 As this was Friday, the buildings were filled with employees hard at work.  When the lead sections of the parade finally arrived, employees hung out of building windows or joined other spectators on the sidewalks, standing 8-10 deep in certain areas.  They were cheering, yelling “Thank You” to the veterans, shaking hands, and offering standing ovations when each group passed in review.

A young professional woman in the crowd was waving a newly purchased American flag and commented, “I couldn’t help it!  I cried when I saw these guys and realized how many of them there were who went to Vietnam.  They look like all my brothers and every boy I ever grew up with.  I’ve kissed a few, I cheered every group that passed.  My hands are sore from clapping, and I think I may just take the rest of the day off.  This has been a very emotional day.” 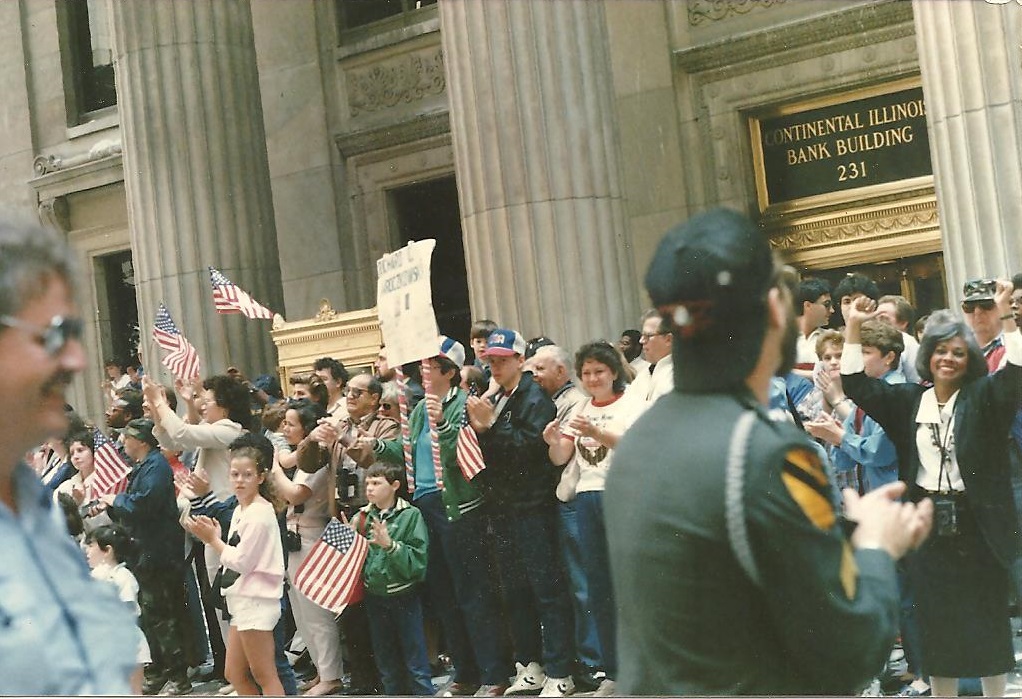 One vet marching in the parade was overhead telling his friend, “Look at these guys!  Look at the love for each other.  Have you ever seen anything like this?  See…We’re not so bad after all!”

When we took the turn onto LaSalle street, the sight greeting us was unbelievable!  It was a bright sunny day, yet the street was enveloped in shadow as if we were entering a tunnel.  High buildings lined both sides of the street, keeping the street shaded and cooler.

Confetti and shredded paper spewed from every opening and rooftop, floating down onto the troops like a snowstorm in the middle of summer.  Clumps of the stuff still hung from windowsills and looked like lava flowing from a volcano.  The roadway was covered in ankle deep paper snow, which offered the marchers an opportunity to clown around.  Wearing shit eating grins on their faces, many of the participants gathered “snow” , tossing it and one another and recycling clumps into the air.  This was a first for me…an honest to God ticker tape parade! 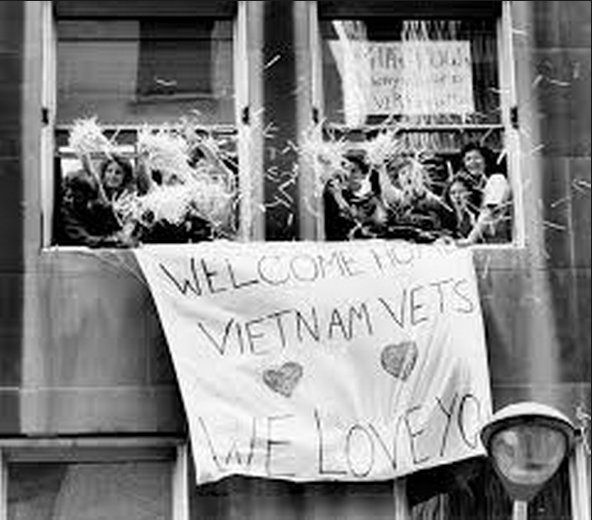 Organizers expected 50,000 veterans and hoped it would begin a healing process for those participating.  Surprisingly it was the largest parade in Chicago history as 200,000 Vietnam Veterans and their families marched 2.5 miles from Navy Pier to Grant Park and half a million spectators lined the parade route welcoming them home.  It’s 11 years after the fall of South Vietnam and 26 yrs. since the first Vietnam Veteran returned home from the war.  Such a long time passing!

A parade is nothing more than a symbol, but symbols change a lot of minds.  Most vets couldn’t remember marching down LaSalle Street.  They only remember this dreamlike thing, the clouds of white coming down on them, their hearts jumping out of their mouths, many crying.  It’s what should have happened when they came home.  It’s what a grateful country does!

The Welcome Home Vietnam Veterans Parade was dubbed, “Woodstock for Vietnam Veterans,” the ultimate event to symbolically begin to close the real and imagined rifts between veterans and the rest of their countrymen.  One group stated, “the parade was the biggest group therapy session ever.”

The party at Grant Park is another story for another time.  Let’s just say that it was a night of bonding…like a family reunion.  Live entertainment performed at the band shell, groups sat around reminiscing, long lost friends found one-another and I never had to pay for beer once that night.  The good folks of Chicago took care of us well into the wee hours of the night. 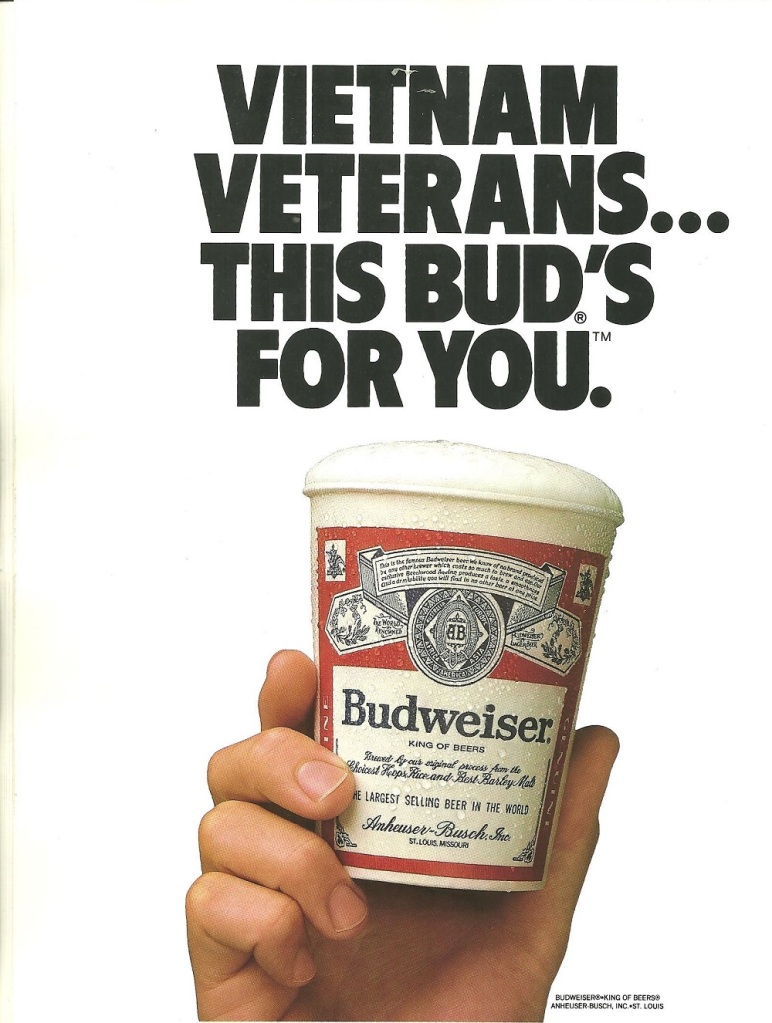 After the parade, out of town veterans called Chicago newspapers to say thanks to the city.  One vet was so overwhelmed, he paid $400 of his own money to run a thank you ad in the Chicago Tribune.  Hundreds more signed a large, “Thank You Chicago” banner at Grant Park, which was later presented to the city.  Bags filled with letters of appreciation and thanks arrived daily for the next couple of weeks.

Those two years had a profound impact on my life and brought me out of the closet.  I was proud to be a Vietnam Veteran and wasn’t afraid to let people know.  I purchased a ball cap in 1985 with a Vietnam Veteran patch on the front and began wearing it wherever I went.  I’ve gone through dozens since, but continue wearing them till this very day in 2015.

For those Vietnam Vets willing to accept it…WELCOME HOME!

To all vets…THANK YOU FOR YOUR SERVICE!

NOTE:  The Chicago Tribune was used to gather information for this article.

8 thoughts on “When Vietnam Veterans Felt the Love”