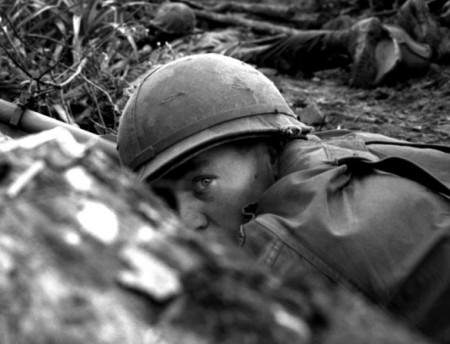 Everyone remembers the first time they were shot at in combat in Vietnam. This was my first time.

At the end of March, 1968 the battalion was involved in Operation Wilderness, working in different areas around Dau Tieng and Tay Ninh. 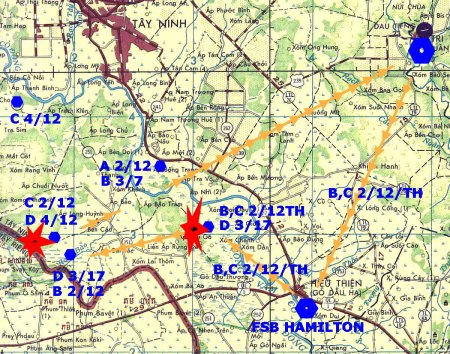 We had jumped from Dau Tieng via Chinook CH-47’s down to Go Dau Ha where FSB Hamilton was located the day of the 30th, and did a quick sweep of the area. On the morning of the 1st of April we made a combat assault west across the Vam Co Dong River and dropped into a rice paddy area where we started to work our way westward over the next three days.

The morning of the 4th, we received reports from Charlie Co 1st platoon’s ambush patrol of movement to their front. The AP acted swiftly to set up a secondary ambush. This patrol sprung their ambush on two VC at 0640.

Soon thereafter our task force is mobilized and we are ready to move out of our night laager and to head west.

During this morning’s activities, I don’t remember separating myself from my M-60 gun crew, but we must have. As I think about this year’s later, this was a cardinal sin. Our primary responsibility was to provide support for the machine gunner. 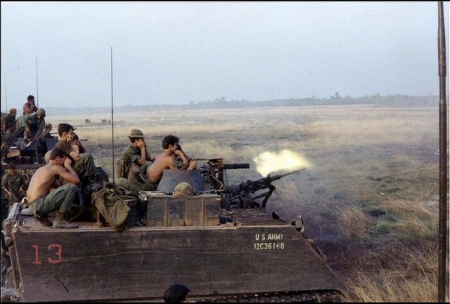 Anyway, by we, I mean PFC David Schultz and myself.

I don’t remember how far we had advanced from our laager site. I’m guessing it could have been 1,000 meters or so. Not a great distance at any rate. Suddenly, one of the track commanders stops and signals the rest of the tracks to stop.

We have 8 armored personnel carriers (APCs) on line at this point with Charlie Co. dispersed between each of the tracks. We had been playing hop scotch with the mechanized unit. They would advance about 50 meters, then we would catch up and pass them about the same distance, then repeat the process, all this done in one wide continuous line stretching out about 200 meters.

David and I made eye contact with the guy on the APC and he signals us to come over. He indicates that he thought he had seen some movement in front of his track. The geography we had been going through consisted of areas of open grass and small bushes surrounded by trees and underbrush. At this point we were kind of “staged” behind a hedgerow, which was 10 meters in front of the tracks. Hedgerows can be trees, brush and bushes which create a makeshift fence line. This is often used to separate property lines.

There was an ox cart beyond the hedgerow that crossed the entire front of our unit’s formation. Beyond the road was a heavy tree line that stretched the width and beyond of our troops and tracks.

The APC commander says he is “holding fast” and wants the foot grunts to check out the area to his immediate front. So, Schultz and I abandon (stupidly, what else can I say as a greenhorn) our gun crew, walk around the APC and move forward onto an oxcart trail. As I look to my left and front and down the oxcart trail, I don’t see anything. Within a matter of a few seconds, automatic weapons fire and RPG’s are going off. My head whirls to my right in the direction of the noise as I drop to the ground on the road.

In that moment, I see PFC David Schultz, who was standing to my right, grab his midsection and fall to the ground. He took the initial burst from the small arms fire that was being directed at us. We had walked up to an NVA base camp. (Later it was estimated that it might have contained two hundred VC). 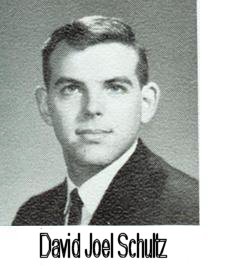 At this point, there continued to be bursts of weapons fire everywhere. I could hear RPG’s being fired and resulting explosions. The APC’s began to exchange fire as they opened up with their .50 Cal.’s and started to back away from the intense fire coming from the hedgerow across the road. I looked again to my right and I was so close that I could see a number of NVA in pith helmets in bunkers firing to their front. I flicked the safety off of my M16 and unloaded a clip in their direction.

I needed to crawl over to Schultz to see what I could do for him. He was still not moving nor talking. We were both carrying 200 rounds of 7.62mm ammo for the M-60 plus our own equipment. Schulz was no small kid. I figured he had to weigh around 200 lbs and the equipment on him added another 30-40 lbs.

I tried to check David over for wounds. It was difficult considering I was trying to do this lying flat on the road surface. As I was feeling his body for life signs, I was receiving more ground fire from the tree line. Bullets are dancing on the ground toward me. I had no fire support and was lying with David on the road exposed to the enemy.

My unit had pulled back. My gut reaction was that David was gone. I know he took it across the midsection from his right, probably through the liver and stomach. But I wanted to be sure. I tried to roll him over but had trouble doing that with his pack still on. I had another VC firing at me so I grabbed another clip and fired back. Schultz was still unresponsive. I reached around him one more time and as I was doing this, I was hit in the upper arm by an AK-47. 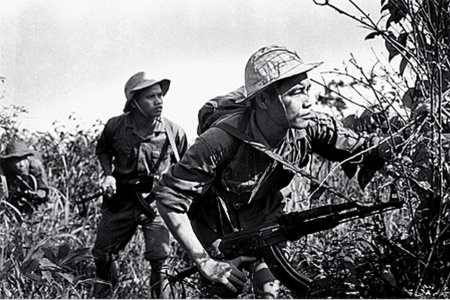 NVA soldier with an AK-47. The soldier on the right was killed shortly after this photograph was taken (Doan Cong Tinh)

That sealed the deal for me. I couldn’t drag Schultz to safety now, even if I wanted to. Not without the suppressing fire I needed in order to stand up and gain leverage. I stood no chance against those automatic weapons out in the open.

What to do, I ask myself? The only way I can move him, even if he is alive, is to stand up and drag him. That is a ticket for my own death I am sure as I look towards the base of fire that is coming from those bunkers. I am totally exposed in the open with no fire support of my own. I must make a decision and leave him there.

Is he really gone, I ask? Can I be sure? A question I have struggled with for 44 years and today, like the Phoenix, it rises once more.

I fire off a few more bursts from my M-16 and jump up and sprint back across the road and behind the hedgerow that follows the edge of the oxcart trail. I work my way back through the gunfire and explosions coming now from my left. Past a burning APC and its two dead occupants, I pick my cover carefully. I’m looking to find my platoon.

I locate an NCO and tell him of what I have witnessed, and I am told we will be holding our ground and Schultz is left to his fate. I am ordered to see a medic for my wound. The Medic tags me and tells me I am to get on the next dust off chopper.

MG F.K. Mearns, the 25th Div Commander shows up in his C&C (command and control) chopper and lands just behind the battle lines. Word is received that he is willing to pick up some wounded. That turns out to be SGT John Spoores and myself. We climb aboard his chopper and lift off.

In the air, I put on a headset and speak to the General, answering his questions about the situation on the ground. The conversation is brief. We get airlifted to Cu Chi to the 12th Evac Hospital for treatment. 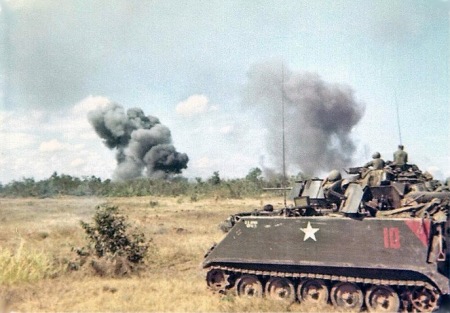 The fight would continue for the rest of the day and the area to our front would be pounded with artillery and air strikes. I say a prayer for Schultz and just hope that I made the right choice, for now, there is no other.

The fight lasts the rest of the day and the area to the front of the battalion is pounded by artillery until there is nothing left of the trees and brush. The next day the enemy pulls out and the area is swept for weapons and bodies. We find 8 dead VC and plenty of blood trails leaving the area. The next day, 20 fresh graves are discovered to the west by aerial surveillance.

Looking back upon this day, I never forgot the lesson I learned. You have to know what is expected of you at all times. In this case, why did Schultz and I leave the gun crew or why wasn’t my squad leader keeping an eye on us rookies?

When I made SGT, the first lesson I would teach a rookie is, don’t do anything on your own and always wait for your squad leader or other NCO to tell you what to do in a firefight. The mistake we made that day costs Schultz his life and it shouldn’t have.