Charlie and Ruth Babcock are fellow VVA chapter 154 members and friends…I’m posting this recent newspaper article as a tribute to them on this Memorial Day Weekend!  Please click on the link below to watch the short video before reading the article.  God Bless you both!!

The contents of the small, blue denim-material bag are few but mighty.

A brush. Trimming shears. A small spade. A spray bottle with soap and water mix.

These are the only tools Charlie and Ruth Babcock need when they visit the graves of Michigan soldiers killed in the Vietnam War. 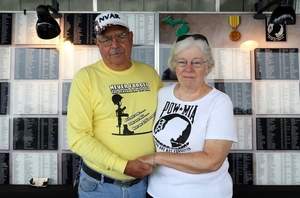 Sometimes arriving on their 2011 Harley-Davidson motorcycle, the retired Sterling Heights couple use the brush and bottle to clean grave markers; the shears to trim the grass.

For about the last eight years, the Babcocks have been collecting photographs of the 2,654 Michigan soldiers who died, are listed as prisoners of war or missing in action from the Vietnam War to accompany the Michigan Vietnam Veterans Traveling Memorial. So far, about 1,800 pictures of the soldiers have been collected.

In 2006, they took the effort a step further, deciding to see where the soldiers are buried. The Babcocks make trips to cemeteries throughout Michigan and from coast to coast, visiting Arlington National Cemetery in Virginia and graves in California. They plan to go to 23 graves in Bay County next weekend.

On Wednesday, the couple stopped to find two graves on their way back from a trip to Indiana. In Union City, Mich., they stopped at the police station, inquiring about the cemetery where Larry La Mar Lower, a lance corporal in the Marine Corps, was buried.

Charlie Babcock said Police Chief Tom Case knew of Lower — who was 19 when he was killed in Vietnam — from school. Case escorted the couple to the cemetery, where they cleaned Lower’s marker, took a picture of it and updated Lower’s page in one of eight thick books containing information about each soldier that travel with the memorial around Michigan.

Ruth Babcock, 68, who handles the research, said the couple are still looking for the graves of 76 soldiers, most from Wayne County. 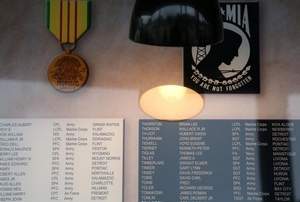 “It’s like a big puzzle I’m putting together,” she said, adding that the payoff is great because they can pay a little bit of tribute to the soldiers.

Charlie Babcock said the couple have found that many families who lost a son were upset their son was drafted. They didn’t request a military marker. They often have a family plot marker and it’s not in military record archives.

The Babcocks said they have had some help in their work at the graves from Jim and Nancy Skoviak of Macomb County and Pat Daniels, past president of the Vietnam Veterans of America Chapter 154 in Roseville. That group handles the traveling Michigan memorial.

The five-panel, black-and-white checkerboard traveling memorial was created by Staff Sgt. Kurt Damrow and his friend and co-worker John Swanson for an air show at Selfridge Air National Guard Base in Harrison Township in 2005.

It is an alphabetized list of names and includes each soldier’s rank, military branch and hometown. Fifty soldiers are still missing in action.

“To us, those guys are somebody and a picture speaks louder than words,” said Dave Schoenherr, a Vietnam War veteran who schedules the stops for the traveling memorial.

“They are not just a name on a wall. They are someone’s (loved one),” he said. “They gave it all. They need to be remembered.”

Joe Huebner of Royal Oak stopped at the traveling memorial Thursday while it was displayed outside the Royal Oak Farmers Market, along with a missing man table and poster with eight Michigan Medal of Honor recipients.

Huebner said he was in the ROTC at Michigan State University, but wasn’t sent overseas during the war. He searched the names on the memorial looking for people he knew from East Detroit, now Eastpointe. He also wanted to stop out of respect for the soldiers.

Ruth Babcock said every time she meets a family of one of the soldiers through their work, she thinks how that could have been her family. Her brother served overseas during the war but made it back home.

She said it only takes a second to pause and remember those who died for their country.

“It doesn’t take long to say thank you,” she said.

3 thoughts on “Couple’s crusade: Find graves of the 2,654 Michigan soldiers killed in Vietnam”