For most servicemen who served in Vietnam, the Freedom Bird was that civil airliner which took them back to the land of the big PX at the end of   their tour. Mine was a bit different sort of Freedom Bird. In mid-1967, as a junior Air Force Captain, I was detailed to 7th AF HQ in Saigon as an Air Technical Intelligence Liaison Officer, short name: ATLO (the “I” gets left out, as people look strangely at anyone who calls himself an ATILO, thinking he is somehow related to Attila the Hun). My job was to provide 7AF and the air war the best technical intelligence support that the Foreign Technology Division of AF Systems Command (my parent organization) could provide, in whatever area or discipline needed. Also I was to collect such technical intelligence as became available. This was a tall order for a young Captain, and this assignment provided much excitement, including the Tet Offensive. 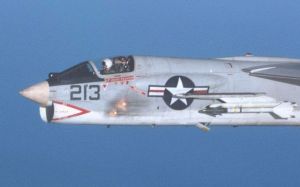 At that time, Operation Rolling Thunder was underway, the bombing of military targets in North Vietnam. The weather in NVN was often lousy, making it difficult to find and accurately strike the assigned targets, so a radar control system was set up to direct the strike force to their targets. This system was installed in a remote, sheer-sided Karst mountain just inside Laos on the northern Laos/NVN border. The site could be accessed only by helicopter or a tortuous trail winding up the near-vertical mountainside, so it was judged to be easily defensible. The mountaintop was relatively flat and about 30 acres in size. On it was a tiny Hmong village called Phu Pha Ti, a small garrison of Thai and Meo mercenaries for defense, a helicopter pad and ops shack for the CIA-owned Air America Airline, and the radar site, which was manned by “sheep-dipped” US Air Force enlisted men in civilian clothes. Both the US and NVN paid lip service to the fiction that Laos was a neutral country, and no foreign military were stationed there, when in reality we had a couple of hundred people spread over several sites, and NVN had thousands on the Ho Chi Minh trail in eastern Laos. This particular site was called Lima (L for Laos) Site 85. The fighter-bomber crews called it Channel 97 (the radar frequency), and all aircrews called it North Station, since it was the furthest north facility in “friendly” territory. Anywhere north of North Station was bad guy land. 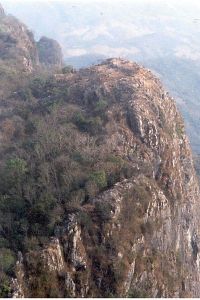 The Channel 97 radar system was an old SAC precision bomb scoring radar, which could locate an aircraft to within a few meters at a hundred miles. In this application, the strike force would fly out from Lima Site 85 a given distance on a given radial, and the site operators would tell the strike leader precisely when to release his bomb load. It was surprisingly accurate, and allowed the strikes to be run at night or in bad weather. This capability was badly hurting the North Vietnamese war effort, so they decided to take out Lima Site 85. Because of the difficulty of mounting a ground assault on Lima Site 85, and its remote location, an air strike was planned. Believe it or not, the NVNAF chose biplanes as their “strike bombers!” This has to be the only combat use of biplanes since the 1930’s. The aircraft used were Antonov designed AN-2 general purpose ‘workhorse” biplanes with a single 1000hp radial piston engine and about one ton payload. Actually, once you get past the obvious “Snoopy and the Red Baron” image, the AN-2 was not a bad choice for this mission. Its biggest disadvantage is, like all biplanes, it is slow. The Russians use the An-2 for a multitude of things, such as medevac, parachute training, flying school bus, crop dusting, and so on.

An AN-2 just recently flew over the North Pole. In fact, if you measure success of an aircraft design by the criteria of number produced and length of time in series production, you could say that the AN-2 is the most successful aircraft design in the history of aviation! The NVNAF fitted out their AN-2 “attack bombers with a 12 shot 57mm folding fin aerial rocket pod under each lower wing, and 20 250mm mortar rounds with aerial bomb fuses set in vertical tubes let into the floor of the aircraft cargo bay. These were dropped through holes cut in the cargo bay floor. Simple hinged bomb-bay doors closed these holes in flight.  Pretty good munitions load to take out a soft, undefended target like a radar site. Altogether, the mission was well planned and equipped and should have been successful, but Murphy’s Law prevailed.

A three-plane strike force was mounted, with two attack aircraft and one standing off as command and radio relay. They knew the radar site was on the mountaintop, but they did not have good intelligence as to its precise location, it was well camouflaged, and could not be seen readily from the air. They also did not realize that we had “anti-aircraft artillery” and “air defense interceptor” forces at the site. Neither did we realize this. The AN-2 strike force rolled in on the target, mistook the Air America ops shack for the radar site, and proceeded to ventilate it. The aforementioned “anti-aircraft artillery” force – one little Thai mercenary about five feet tall and all balls – heard the commotion, ran out on the helicopter pad, stood in the path of the attacking aircraft spraying rockets and bombs everywhere, and emptied a 27-round clip from his AK-47 into the AN-2, which then crashed and burned. At this juncture, the second attack aircraft broke off and turned north towards home.

The “air defense interceptor” force was an unarmed Air America Huey helicopter, which was by happenstance on the pad at the time, the pilot and flight mechanic having a Coke in the ops shack. When holes started appearing in the roof, they ran to their Huey and got airborne, not quite believing t he sight of two biplanes fleeing north. Then the Huey pilot, no slouch in the balls department either, realized that his Huey was faster than the biplanes! So he did the only thing a real pilot could do -attack! The Huey overtook the AN-2’s a few miles inside North Vietnam, unknown to the AN-2’s as their rearward visibility is nil. The Huey flew over the rearmost AN-2 and the helicopter’s down-wash stalled out the upper wing of the AN-2. Suddenly the hapless AN-2 pilot found himself sinking like a stone! So he pulled the yoke back in his lap and further reduced his forward speed. Meanwhile, the Huey flight mechanic, not to be outdone in the macho contest, crawled out on the Huey’s skid and, one-handedly, emptied his AK-47 into the cockpit area of the AN-2, killing or wounding the pilot and copilot. At this point, the AN-2 went into a flat spin and crashed into a mountainside, but did not burn.

A couple of firsts: (1) The first and only combat shootdown of a biplane by a helicopter, and (2) The first known CIA air-to-air victory. As an addition to this story, there is a painting of this shoot down on prominent display at the University of Texas Dallas Research Library in Richardson Texas. Also, the throttle quadrant from the downed AN-2 is displayed along with other Air America memorabilia. Have you ever seen an Air America one kilo gold bracelet? Not many of those around. Last year, the CIA finally turned over all of the Air America records to UTD. There was a reunion of dozens of CIA and Air America personnel at the event, which included several panel discussions, open to the public. The helicopter involved was actually a civilian Bell 205 which looks like the Bell UH-1H or Huey.
WJY

3 thoughts on ““Air Story” Out of Vietnam (Guest Blog)”