I’ve posted an excerpt from our weekly newspaper in Vietnam, which highlights stories from the 25th Division.  The second article below (1/27th) is a blurb about the bunkers we found; the full story is detailed in my book, “Cherries”.   Copies of this newspaper were sent out to the field with every resupply to pass around and share.  We always looked forward to this newspaper as it was our only link to others outside of our small company community.  A real treasure!  I’ve provided a link at the end of this article for those that want to peruse the many complete issues.

FSB BARBARA – Warriors of the 2nd Battalion, 12th Infantry killed three Viet Cong and destroyed a number of bunkers near here recently.  Two of the VC killed occurred on the same day.

An element of Bravo Company, patrolling an oft-used enemy trail, discovered that two of the enemy were trailing them.  Remaining calm the GIs maneuvered the curious VC into an open position and then surprised them with several quick bursts of small arms fire.

After the initial blasts of their small arms fire, the men swept the area, finding one of the enemy dead and his AK and two AK magazines.

Nearby the Warriors located a cluster of six bunkers which the enemy had been using as a repair shop.  An assortment of vehicle parts were found.

A second VC was killed by elements of the Warriors’ Alfa Company later that day.  In this case, a lone VC was contacted and killed by a small patrol several miles southeast of here.

Several days later the Recon platoon reported some movement in some bushes.  After a warning had been made without results, the GIs reconned the bush by fire.   An ensuing sweep of the area uncovered one dead VC.

FSB BEVERLY – Over a recent two-week period the Wolfhounds of the 1st Battalion, 27th Infantry killed 11 Viet Cong and located seven bunkers in the area northwest of here.

Alfa Company opened the period by locating the bunkers and then several days later killed one VC with a mechanical ambush.

Three days later Alfa’s totals were completed when an enemy force was surprised by the Hounds.  The quick contact in which the enemy didn’t stay around very long, resulted in three VC killed.

Two of the contacts were by mechanical ambushes, the first killing three and the other killing one.  Besides the bodies, the GIs found four AKs, a carbine and sundry amounts of ammunition and supplies.

Two more dead Communists were found by the Wolfhounds in the third report.

Charley Co. bushed an unknown number of VC early one morning.  There was no return fire.  A later search uncovered one badly wounded Cong who was medevaced out of the area.

XUAN LOC – Over the past few days the 1/5 (Mech.) destroyed a total of sixteen bunkers in an area nine miles west of Xuan Loc.

The first find was made by Charlie Company recon patrol.  Four bunkers were found in the morning hours and nine more the same afternoon.  In searching out the bunkers several M-16 magazines, one grenade and a claymore mine were found.

One Viet Cong was killed along a trail west of the bunkers two days later.  After several blasts of small arms fire, the platoon swept the area finding one dead VC and an AK-47.  A few yards away an RPG launcher was found.  No GIs were hurt in the action.

Charlie Company opened the period by killing one Viet Cong with a mechanical ambush.  Two days later Charlie Company again surprised and killed a North Vietnamese Regular.  Sweeping the area, the Regulars found one AK-50 near the body. 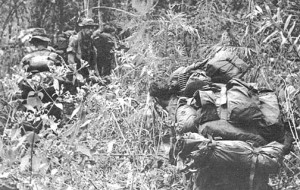 Delta Company on the same day reported finding two bunkers and three trenches.  No equipment or weapons were found when a search was made.

One day later Charlie Company again made contact and one more Viet Cong was killed.

Charlie Company, still on the move, discovered a reinforced concrete bunker the next day.  A search of the area proved it had been vacant for sometime.

Charlie Company killed another VC the next day with a hasty ambush set up along a trail.  One AK-47 found. 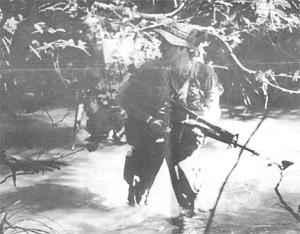 The GIs encountered the enemy force moving through the trees of a wild banana grove.  A quick exchange of gun fire ensured and the enemy took to cover.

The Tropic Lightning Rangers immediately called in artillery and helicopter gunships while keeping the VC pinned down with a continuous stream of small arms and automatic weapons fire.

One thought on “How we kept informed in Vietnam”