Sgt. Ronald A. Payne seen entering a tunnel in search of Vietcong with a flashlight and M1911 pistol.

The underground war of Vietnam had a subterranean aspect reaching far beyond the awareness of the American military brass conducting the war. From the beginning, the Viet Cong knew that they didn’t have the means to defeat the United States. But they also knew that, even if they couldn’t win by conventional means, they could keep their fight alive as long as they could disappear from one raid and reappear to execute another. They were the invisible enemy for the exasperated American troops. That vast network of tunnels below the ground and out of sight provided the Viet Cong with the hiding places that a guerilla army used to thwart a superpower.

The Viet Cong relied upon a network of small access holes just two feet wide and three feet deep that led to communication tunnels which encompassed a maze of caverns and caves typically less than six feet high that reached as far as the border of Cambodia. Those tunnels were the nerve center of the Viet Cong military.

The tunnel-building began during the French occupation as Vietnamese peasants, using tin bowls and their hands created a labyrinth of connecting burrows that would, by the time the Americans replaced the French, provide the Viet Cong with a military base that allowed them to infiltrate the capital of Saigon with spies and saboteurs. As a Viet Cong officer told a British reporter after the end of the war, the tunnels functioned “like a thorn stabbing the enemy in the eye.” Down in the tunnels, the Viet Cong had air, water and sanitation. They built air-raid shelters, latrines, hospitals, kitchens, conference centers, sleeping rooms, and print shops. Rice and water were stored in the tunnels, Artillery captured from the Americans was stored there as well. The Tet Offensive of 1968 was planned in the tunnels and when the operation was launched, the tunnels were home to thousands of Viet Cong soldiers.

If the tunnels were the secret weapon of the Viet Cong, the Tunnel Rats were the unsung heroes of the American forces. In their 1985 book, The Tunnels of Cu Chi, BBC reporters Tom Mangold and John Penycate told the story of the American Tunnel Rats, a saga they learned about for the first time from the Viet Cong, who admired the Tunnel Rats as the best soldiers among the American forces. The Tunnel Rats, those who survived, did not tell their own story. Those who returned home came back to a divided country where the Vietnam War was bitterly opposed and the soldiers who fought it faced hostility from their fellow citizens. But Mangold and Penycate learned that the Viet Cong vividly remembered and respected the Americans who chased them through the underground maze armed only with pistols, knives, flashlights and courage. 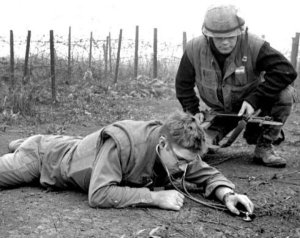 The Tunnel Rats, a unique fighting force, were careful to use nothing that would dull their senses, not drugs, not even chewing gum or aftershave cologne. Relying on their senses of touch and hearing, they used their fingertips to search for booby traps in pitch black darkness. Their mission was deadly in its simplicity: using a small-caliber revolver, they were to kill, capture, or entomb the Viet Cong. They could only fire three shots in a row because if six shots were fired, the enemy would know that the American was out of ammunition. 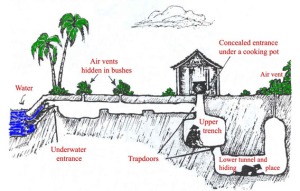 At the most, there were 100 Tunnel Rats. Most met their end in the tunnels. The Tunnel Rats went into the holes with no idea of what they might encounter below the ground. Perhaps they would be met by a snake tied to a length of bamboo with a piece of string. If the Tunnel Rat didn’t check the ceilings with a flashlight, he risked being bitten in the face or neck by the snake. Or perhaps, the Tunnel Rat would be met by a tripwire that would open a box filled with scorpions. The Viet Cong also used hornets, spiders, bats centipedes, and even plague-bearing rats.

“There weren’t many tunnels up North at Khe Sanh however in Danang and south there were many. One tunnel complex was under the PX at Marble Mountain by DaNang base. They had a hospital and barracks for the Viet Cong. They also had many spider holes everywhere. Just big enough for one man with a grass cover to hide and cause havoc and set up ambushes.” Vietnam Veteran Jim Wodecki

After Saigon fell in 1975, Vietnam preserved the Cu Chi tunnels as war memorial parks. Today, tourists can crawl through parts of the tunnels that are regarded as safe, eat a meal that would have been familiar to a Viet Cong soldier, see the booby traps, and fire an AK-47 on a firing range.

Jack Flowers is glad that the story of the Tunnel Rats has been told. “But,” he says, “Why did we do it? I’d never want a son of mine to have to do it. We should thank God that we’re not generally challenged enough in life to have to show that side of ourselves.”

If you are interested in reading more about tunnel rats, Batman, and Lt. Flowers, you can order Rat Six by Jack Flowers at: https://www.amazon.com/Rat-Six-Jack-Flowers/dp/1642141984

If you prefer a signed hardcover copy of Rat Six, click here: http://www.ratsix.com/

CLICK THE LINK TO READ PART II OF THIS STORY:  https://cherrieswriter.com/2020/07/12/tunnel-rat-soldiers-during-the-vietnam-war-part-2-of-2/

28 thoughts on “Underground Horror: The Tunnel Rats of Vietnam (Part 1 of 2)”