Suppose you were raised in a military town and joining the Army was your ultimate goal. Once of age, you volunteer and are then later picked for specialized training…rumor has it you’ll be leaving for Vietnam soon to utilize this special training, but instead, you find yourself on the steps of the Pentagon during a major demonstration. Read about it here. 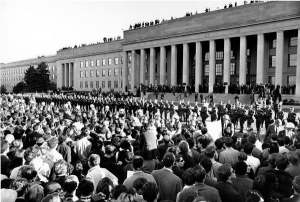 As a United States Army Private, Fresh out of training, I awoke from a  brief nap in the Pentagon’s tunnels.  Here I was down under this mammoth and invincible structure, lying on the floor in full dress greens, bloused boots with just a bedroll between me and the hard concrete.  Next to me lay my M-14 rifle with scabbard bayonet.  Why I was there was still somewhat of a mystery.  There were no cell phones, no twitter, no google, no social media back then.  So we could only imagine why we were there.  But let’s digress a bit. 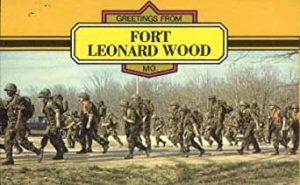 Well, on to Leadership Prepatory Course I went, then Advanced Individual Infantry Training at Ft. Ord, California.  From there, after graduation, I was assigned to The 6th Armored Cavalry at Ft. Meade, Maryland.  I was there for a couple short weeks then sent to Camp Pickett, Va for more field training in Mechanized Training with M-48 Tanks and old WWII Jeeps.  Camp Pickett is where we would start some very secretive and special training.  We did not know why, but it was ultimately training for our October 21st encounter with America’s hippies at the Pentagon.  But at this time we did not know the reason for the special training.  All we knew was that it was something very secret.  We were told that continually.

About the first week of October we were brought in from our Mechanized training in the forests of Virginia to our old WWII wooden barracks at Camp Pickett, we called garrison, and told we were to undergo some special secret training.  We were told to sit down and write our loved ones or head to the telephone booths and call them, stating that we would be undergoing training and would not be in communication with them after today until further notice.   After these letters and or call, all having to be completed by 9PM our mail would be held up until our training was complete and we could no longer make any phone calls to our wives, girlfriends or families back home.  The payphones were put off-limits (Camp Pickett was a small garrison in 1967 and I don’t think we had more than 20).  We all were thinking that our time had come and we were headed to Vietnam with this training having to do with some special mission in mind.  So we thought anyway.  We would be a special group of soldiers going after the commies in Vietnam.  Oh my! the minds of young soldiers.

On October 18, 1967, we were instructed to put our wool uniforms on (remember its wintertime) and assemble our dress green uniforms, personal overnight hygiene items and check out our M-14 Weapons.  That night after dark we were loaded onto several 2 1/2 ton trucks and headed out.  At every intersection on our Camp, some of us had to jump out with flashlights and stop traffic, over and over again.  When we got to the main roads we had Military Police Cars filled with MPs doing the job for us.  Hours later we stopped at, I believe, Camp Hill and then onto Ft. Meade, Maryland.  Upon arrival we were told to go sleep, still not knowing where we were going or why.  In the morning before daylight, we were instructed to get our dress green uniforms ready, we would have bloused boots, and helmet liner ready to put on, at a time later on that day.  All-day we polished our boots, cleaned our weapons and did it all over again.  At nightfall after supper we were loaded onto busses and headed out, I could tell we were headed in the direction of Washington DC, a few miles down the road.  We pulled into the Pentagon and unloaded the busses and went into what to me was a basement full of long halls.  We were told to put our sleeping bags down on the floor and again sleep.  At this point, I had had enough sleep I just wanted to know what was happening.  I got my wish, within a few hours or so we were told that 100,000 hippies were going to storm the Pentagon and levitate it or some such nonsense.  We were going to be going upstairs and surround the Pentagon and keep the hippies at bay. 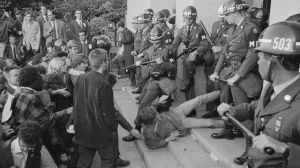 In all this, I had a perfect place to watch it all, from the entrance to the Pentagon you could look below for several 100 yards in any direction, the mass of humanity.   No one got close to our second line of defense.  Well, not where I was anyway. 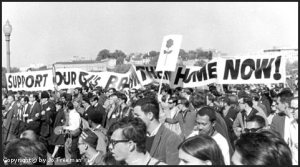 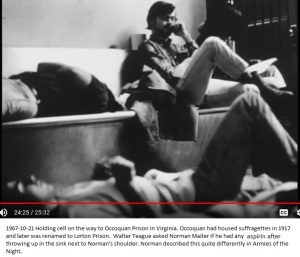 Good story, brother. Thank you for allowing me to share this with my readers. Thank you, too, for your sacrifice and service.