The tunnels of Củ Chi are an immense network of connecting underground tunnels located in the Củ Chi District of Ho Chi Minh City (Saigon), Vietnam, and are part of a much larger network of tunnels that underlie much of the country. The Củ Chi tunnels were the location of several military campaigns during the Vietnam War and were the Viet Cong’s base of operations for the Tết Offensive in 1968.

The tunnels were used by Viet Cong soldiers as hiding spots during combat, as well as serving as communication and supply routes, hospitals, food and weapon caches and living quarters for numerous North Vietnamese fighters. The tunnel systems were of great importance to the Viet Cong in their resistance to American forces and helped to counter the growing American military effort.

LIFE IN THE TUNNELS

American soldiers used the term “Black Echo” to describe the conditions within the tunnels. For the Viet Cong, life in the tunnels was difficult. Air, food, and water were scarce and the tunnels were infested with ants, venomous centipedes, scorpions, spiders, and vermin. Most of the time, soldiers would spend the day in the tunnels working or resting and come out only at night to scavenge for supplies, tend their crops, or engage the enemy in battle. Sometimes, during periods of heavy bombing or American troop movement, they would be forced to remain underground for many days at a time. Sickness was rampant among the people living in the tunnels, especially malaria, which was the second largest cause of death next to battle wounds. A captured Viet Cong report suggests that at any given time half of a PLAF unit had malaria and that “one-hundred percent had intestinal parasites of significance”. 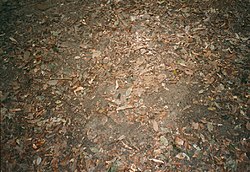 A trap door on the jungle floor leads down into the Củ Chi tunnels. Closed and camouflaged, it is almost undetectable. 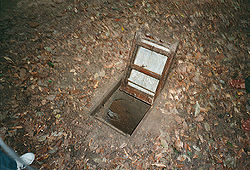 U.S. CAMPAIGNS AGAINST THE TUNNELS

The tunnels of Củ Chi did not go unnoticed by U.S. officials. They recognized the advantages that trapdoor held with the tunnels and accordingly launched several major campaigns to search out and destroy the tunnel system. Among the most important of these were Operation Crimp and Operation Cedar Falls.

Operation Crimp began on January 7, 1966, with Boeing B-52 Stratofortress bombers dropping 30-ton loads of high explosive onto the region of Củ Chi, effectively turning the once lush jungle into a pockmarked moonscape. Eight thousand troops from the U.S. 1st Infantry Division, 173rd Airborne Brigade Combat Team, and the 1st Battalion, Royal Australian Regiment combed the region looking for any clues of PLAF activity.

The operation did not bring about the desired success; for instance, on occasions when troops found a tunnel, they would often underestimate its size. Rarely would anyone be sent in to search the tunnels, as it was so hazardous. The tunnels were often rigged with explosive booby traps or punji stick pits. The two main responses in dealing with a tunnel opening were to flush the entrance with gas, water or hot tar to force the Viet Cong soldiers into the open, or to toss a few grenades down the hole and “crimp” off the opening. This approach proved ineffective due to the design of the tunnels and the strategic use of trap doors and air filtration systems.

However, an Australian specialist engineering troop, 3 Field Troop, under the command of Captain Sandy MacGregor did venture into the tunnels which they searched exhaustively for four days, finding ammunition, radio equipment, medical supplies, and food as well as signs of considerable Viet Cong presence. One of their number, Corporal Bob Bowtell, died when he became trapped in a tunnel that turned out to be a dead end. However, the Australians pressed on and revealed, for the first time, the immense military significance of the tunnels. At an international press conference in Saigon shortly after Operation Crimp, MacGregor referred to his men as Tunnel Ferrets. An American journalist, having never heard of ferrets, used the term Tunnel Rats and it stuck. Following his troop’s discoveries in Củ Chi, Sandy MacGregor was awarded a Military Cross.

View of kitchen area within the tunnel system

From its mistakes and the Australians’ discoveries, U.S. command realized that they needed a new way to approach the dilemma of the tunnels. A general order was issued by General Williamson, the Allied Forces Commander in South Vietnam, to all Allied forces that tunnels had to be properly searched whenever they were discovered. They began training an elite group of volunteers in the art of tunnel warfare, armed only with a gun, a knife, a flashlight and a piece of string. These specialists, commonly known as “tunnel rats”, would enter a tunnel by themselves and travel inch-by-inch cautiously looking ahead for booby traps or cornered PLAF. There was no real doctrine for this approach and despite some very hard work in some sectors of the Army and MACV (Military Assistance Command, Vietnam) to provide some sort of training and resources, this was primarily a new approach that the units trained, equipped and planned for themselves.

Despite this revamped effort at fighting the enemy on its own terms, U.S. operations remained insufficient at eliminating the tunnels completely. In 1967, General William Westmoreland tried launching a larger assault on Củ Chi and the Iron Triangle. Called Operation Cedar Falls, it was similar to the previous Operation Crimp, however on a larger scale with 30,000 troops instead of the 8,000. On January 18, tunnel rats from the 1st BN 5th Infantry Regiment of the 25th Infantry Division uncovered the Viet Cong district headquarters of Củ Chi, containing half a million documents concerning all types of military strategy. Among the documents were maps of U.S. bases, detailed accounts of PLAF movement from Cambodia into Vietnam, lists of political sympathizers, and even plans for a failed assassination attempt on Robert McNamara.

A booby trap with punji sticks.

By 1969, B-52s were freed from bombing North Vietnam and started “carpet bombing” Củ Chi and the rest of the Iron Triangle. Ultimately it proved successful. Towards the end of the war, the tunnels were so heavily bombed that some portions actually caved in and other sections were exposed. But by that time, they had succeeded in protecting the local North Vietnamese units and letting them “survive to fight another day”.

Throughout the course of the war, the tunnels in and around Củ Chi proved to be a source of frustration for the U.S. military in Saigon. The Viet Cong had been so well entrenched in the area by 1965 that they were in the unique position of locally being able to control where and when battles would take place. By helping to covertly move supplies and house troops, the tunnels of Củ Chi allowed North Vietnamese fighters in their area of South Vietnam to survive, help prolong the war and increase American costs and casualties until their eventual withdrawal in 1972, and the final defeat of South Vietnam in 1975.

Below is an excellent video all about the CuChi Tunnels and the bombing Campaign, it is a video produced by a tour company in Cu Chi Vietnam very informative it is 48 minutes long.

If you’d like to read another of my articles that tell about those brave US soldiers who entered these tunnels to investigate (Tunnel Rats) then please click on this link:

This post, by Commander Webb, was featured on the website of “Naples Museum of Military History” on July 16, 2018. To view it and many other veteran and war articles, please visit them at:

If you want to learn more about the Vietnam War and its Warriors, then subscribe to this blog and get notified by email or your feed reader every time a new story, picture, video or change occurs on this website – the button is located at the top right of this page.

7 thoughts on “THE TUNNELS OF CỦ CHI”