My friend, Duke Barrett is a published author, drummer, and Vietnam Vet. I enjoy his articles which are witty and full of humor. He maintains a website on WordPress with information about his books and stories he writes about his tour of duty. This is one of them…

Photo featured above is of Duke’s Recon team in Bon Son, Vietnam, 1966

At approximately 3 PM on yet another hot and humid September day, we, the 2nd squad of Delta Co.’s recon platoon of the 1st airborne brigade/8th Cavalry/1st Air Cavalry Division, left the relative security of our firebase and headed down a steep, heavily forested hillside to set up an ambush. The mission…… I mean there had to be a purpose, right? To kill bad guys I guess. As an army Specialist Fourth Class I wasn’t privy to much inside information. The one thing I did know, it was dead on monsoon season and we’d be sleeping out in the rain again.

At the firebase perched high on a hilltop many klicks north of scenic downtown Bong Son, our recon platoon had been providing perimeter security for a division artillery battery. Unfortunately, the high elevation of our position brought us even closer to a hot and unforgiving sun. The poncho liners hung with care over our dug-in positions, with the purpose of mitigating the red hot glare of Sol, failed however to ameliorate the overabundance of heat, humidity and mosquitoes.

Making sure we didn’t get to comfortable in our new digs, battalion hierarchy found something useful for us to do; conduct another patrol. Imagine that, how’d they come up with that idea? It must have been at least twenty- four hours since our last one. It sure seemed like those in command in the rear had an imagination deficit or kept inventiveness in a lock-box somewhere. See, battalion would order up a patrol, we’d saddle-up and move out. Battalion would order up another patrol and, well, you get the idea.

Redundancy and boredom were an ever-present vulnerability because at times it seemed like all you did was follow the guy in front of you, who followed the guy in front of him, who was following orders from somebody who told him what to do. Patrols were serious business so once we saddled-up we all made that necessary effort to fight off the luxury of a daydream.

Nineteen year old Sergeant Bishop, or as I referred to him as, Davy Crockett Jr. was the patrol leader that steamy afternoon as our squad of eight paratroopers descended down the hillside, slicing and dicing our way into the dense and rolling jungled valley.

We took a break at dusk. It seemed to turn from dusk to dark in a matter of seconds in the belly of the beast; the jungle. We’d stopped alongside, not on, but alongside a trail, a rather wide trail, to take a much-needed break. A good recon team almost never took the trail. Besides, that’d be too damn easy. We walked off of the damn things…..kept us alive.

At that point Sergeant Bishop checked his map to confirm where the hell we were, or in military jargon, our position and then called it in a sit-rep to battalion. Having left the firebase in the late afternoon, it was now time for some chow so we broke out the c-rats, sat down in a tight circle perimeter on an already wet turf and had at it.

With our p 38’s in hand, aka can openers, the feast was on. The menu consisted of ham and lima beans, ham and eggs chopped, chipped beef and other culinary delights. These mouth-savoring entrees were only to be followed up with a small can of warm fruit. That and a canteen full of warm water enhanced with an iodine tablet, made one wonder what more could life possibly offer? Know what I mean?
Stomachs filled, it was back to business. Following a short after-dinner stroll to walk off the carbs, we’d reached our objective; a well-used trail, a possible corridor for enemy troops. The mission……..well, to watch and listen for enemy movement and if possible, kill em. I obviously had ESP.

Sarge then ordered us to set up fields of fire on the steep embankment overlooking the trail. As ordered we cleared fire lanes of dense foliage, set up claymore mines to our immediate front and then settled into two-man positions for another comfy evening. You couldn’t beat these accommodations with a stick. Well-concealed only yards up and off of the trail; we followed strict noise discipline for the night. Faces painted and dressed to the teeth in the latest camouflage look, we blended right into the terrain. Quiet as the surrounding greenery and ready for some shuteye, we followed the standard sleep and guard duty schedule of two hours on, two hours off, per individual. 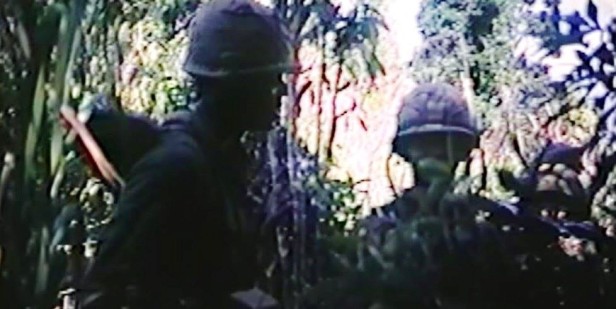 Battalion, we’ve got a problem. It’s about the sleeping arrangements. See, that steep embankment wasn’t conducive for a good night’s sleep. Oh well, who’s complaining? …..Gotta make the best of it. Battalion wouldn’t have cared any damn way.

Lying back on the wet ground we swatted away mosquitoes and stared up at the pitch-black tripled canopied ceiling as we awaited our prey. We couldn’t see a damned thing. It was black as the ace of spades, certainly not a room with a view. Extremely uncomfortable, we longed to be in the comforts of that sun drenched foxhole back on the hilltop. You know that saying, “You don’t know what you got till it’s gone?” Sho ‘nuf is true. Know what I’m sayin’? A little sun, no matter how hot, sounded pretty good. Lord only knows what was crawling around us. Compared to where we were, that firebase we’d left only a few hours ago, seemed like some sort of fancy resort.

Just when you thought things couldn’t possibly get any worse, they did……. rain, lots of rain and even more rain. Like I said, it was full-on monsoon season and Mother Nature didn’t disappoint. All of a sudden the thought of lying on your back on the wet ground, on a steep embankment, sounded pretty good. See, that was before that damn rain started. It rained so hard it became impossible to lie down without feeling you were being waterboarded. In fact, the deluge was so deafening that it made verbal communications all but impossible. To make things worse we started to involuntarily slide down the embankment toward the trail and literally dug in our heels to stop our forward motion over claymores that we’d so carefully positioned.

Try as we may it became more than an effort to keep from being washed down the embankment. In our haste to stop our downward motion we were forced to grab onto available vines and branches while hoping to God that no one would accidentally squeeze one of the mine handles by mistake, causing a premature explosion. The mission, like us recondos, was in peril. Virtually blinded by the dark and with no idea of how long this intense rain and I mean intense, would continue to fall, things couldn’t have gone more swimmingly, so to speak. The only thing we could do was hold on, onto anything that is, with the exception of claymores.

Fearing the deluge could have swept us onto the trail, we became nostalgic for the immediate past. The reason?; the trail, that big trail we fought so hard not to be swept onto, had taken on a new life. Real life, that is. Life in the form of troops……. wet enemy troops…… like hundreds of live, wet enemy troops.

Aware of the impending dangers of the situation, the options afforded us fell somewhere between nonexistent and zero. Suffice it to say we were heavily outnumbered as we selfishly prayed for our own survival as the countless enemy troops passed by only a few feet from our sixteen wet feet. Common sense dictated that we didn’t have a hero amongst us who felt it their patriotic duty to “open-up.” I’m happy to report that common sense prevailed that evening. Not a shot was fired in anger, or fear for that matter. Hell, the weapons were so muddy and waterlogged they probably wouldn’t have fired any damn way.

In the dead of night the only thing we feared was fear itself. Well fear and the hundreds of passing disgruntled enemy soldiers. The only thing we really saw in the dead of night was the moving vines and branches pushed aside by the heavily armed, water-logged alien beings to our immediate front. The fact that we were damn near on top of them, or possibly right under their feet, damn near speed bumps, proved to me beyond a doubt that they were about as anxious to find and confront us as we were they. Misery loves company.

For more than an hour, possibly two or what seemed to be an eternity, the enemy passed by unaware of our existence. I am certain that we, the recon team, had perfected the art of “stealth” that sodden evening.

The sound of the pouring monsoon rain fortunately drowned (no pun intended) out any sounds one with normal hearing would’ve been able to hear. We, on the other hand knew they were there since we’d been sent there to find them. We detected the sounds of metal weapons in carriage and footsteps. To insure our well-being and not allow detection, we had the good sense to turn off our PRC 25 radio, clamped our mouths shut so as not to hear our teeth chatter and prayed our hearts wouldn’t rip right out of our new fashionable but yet functional tropical jungle fatigue shirts.

Mercifully dawn arrived right on time. In what could very well have been the longest night of our lives, mine for certain, proof of the existence of a large enemy force had been left behind. The well-worn trail, covered with hundreds of footprints, discarded wrappers, cigarette butts, human waste and trampled foliage, bore witness to what we almost saw.

Relieved and happy to be alive, we turned on our radio and Sergeant Bishop called in our latest sit-rep since we’d broken radio contact earlier. Oh, and by the way, our painted faces were damn near lily-white by early morn. Aw, you just can’t beat a good shower. They’re really refreshing. Know what I’m sayin’?

Following a thorough recon of the immediate area we again broke for breakfast and a smoke. Those that did smoke lit up to settle frayed nerves. After consuming more tasty c-rats and lukewarm water we took a new look at our even newer lease on life as we climbed back to the hilltop to the Holiday Inn where one could see life from a room with a view.

Thank you, Duke for allowing me to publish your stories. Thanks, too, for your service and sacrifice. Welcome Home, brother! Plan a visit to Duke’s blog to read more posts like this: https://eldorado90.wordpress.com/