by John Hages as it appeared in the Vietnam Veterans of America Chapter 154 – Boo Coo News, January, 2018.

U.S. military salutes are steeped in tradition, some dating back hundreds of years. However, there are misconceptions about military salutes — understandable, considering the number of salutes that exist for various occasions. Some have even changed over the years, sometimes through acts of Congress. All of them, however, are intended to demonstrate great honor to those for whom they are conducted. This includes fallen members of the military, presidents, heads of state and even the nation.

Three-Volley Salute Calling the shots fired at a military funeral a 21-gun salute is incorrect. Even if there are seven soldiers firing three rounds each, this is not considered a 21-gun salute. The shots fired during a military funeral are called the firing of three volleys in honor of the fallen.
The firing of three volleys dates back to the custom of ceasing hostilities to remove the dead from the battlefield. Once finished, both sides would fire three volleys to signal that they were ready to resume the battle.

During the firing of three volleys, the rifles are fired three times simultaneously by the honor guard. Any service member who died on active duty, as well as honorably discharged veterans and military retirees, can receive a military funeral, which includes the three volleys, the sounding of “”Taps,” along with a United States flag presented to the next of kin. Three spent cases are usually inserted into the folded flag, one representing each volley fired.

The 21-Gun Salute hails from naval tradition where a warship would fire its cannons, rendering them unloaded, to signify its lack of hostile intentions. Ships would typically fire seven shots. Whether this is because that was the traditional number of guns on a British warship or because it is of biblical significance is unknown. Forts, having more ammunition, would fire three shots for every shot by a ship. Of course, this wasn’t set in stone, and the number of shots fired differed greatly depending on the country.

Today, the 21-Gun Salute is fired by artillery batteries in honor of the U.S. President, former presidents, the President-elect and heads of foreign states upon their arrival and departure of a military installation. “Hail to the Chief” or the national anthem of the visiting dignitary is also played. The salute is also fired at noon on the day of a funeral of the President, former presidents and the President-elect, as well as Memorial Day in honor of America’s fallen, and on Washington’s Birthday. 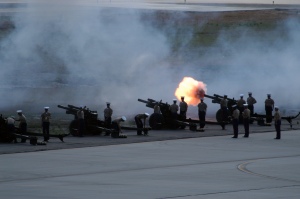 Naval Base Ventura County, Point Mugu, Calif. (June 9, 2004) – U.S. Marine Corps Ceremonial Guard Company render a 21-Gun Salute in honor of former President Ronald Reagan, the 40th President of the United States, before his body is flown to Washington, D.C. where it will lie in state in the Capitol Rotunda. A state funeral will be conducted late Friday morning at the Washington National Cathedral, where President Bush will give the eulogy. On Friday, June 11, President Reagan’s body will return to Calif., for a private burial service. U.S. Navy photo by Photographer’s Mate 1st Class Jon D. Gesch (RELEASED)

In addition, a 19-Gun Salute is fired in honor of other dignitaries such as the vice president, the speaker of the House, president pro tempore of the Senate, chief justice of the United States, state governors, chiefs of staff and 5-Star generals. There is a ranking system for salutes to lower-ranking generals and other dignitaries consisting of dropping two guns for each flag rank junior to a 5-Star general.

Salute to the Nation The practice of firing one shot for each state was officially established in 1810, which at the time was only 17 guns. This tradition continued until 1841 when it was established as 21 guns. Current tradition has the Salute to the Nation as 50 shots by capable military bases, one for each state in the union, fired at noon on Independence Day, with naval vessels firing a 21-gun salute.

Veterans Day While there isn’t a gun salute dedicated to veterans, November 11 is a day when the U.S. and many World War I allied countries commemorate the sacrifices made by the men and women who served in the armed forces. Veterans Day is often confused with Memorial Day, or thought to be the same in their intent. Memorial Day is when we honor those who have fallen in service of our country. Veterans Day celebrates all living military service members.

Veterans Day was first created as Armistice Day by President Woodrow Wilson in 1919 to mark the end of World War I. In 1938, Congress made November 11 a national holiday. Then, on June 1, 1954, President Eisenhower signed legislation that changed the name to Veterans Day to celebrate all military veterans. The exact day of celebration changed a couple more times over the years before being permanently established as November 11 due to popular sentiment.

The following was posted after one of my articles on FB by Shannon Australia Vilandre:

Have you ever noticed that the honor guard pays meticulous attention to correctly folding the United States of America Flag 13 times? You probably thought it was to symbolize the original 13 colonies, but we learn something new every day! The 1st fold of the flag is a symbol of life. The 2nd fold is a symbol of the belief in eternal life.

The 3rd fold is made in honor and remembrance of the veterans departing the ranks who gave a portion of their lives for the defense of the country to attain peace throughout the world.

The 4th fold represents the weaker nature, for as American citizens trusting in God, it is to Him we turn in times of peace as well as in time of war for His divine guidance.

The 5th fold is a tribute to the country, for in the words of Stephen Decatur, ‘Our Country, in dealing with other countries, may she always be right; but it is still our country, right or wrong.’

The 6th fold is for where people’s hearts lie. It is with their heart that they pledge allegiance to the flag of the United States of America , and the Republic for which it stands, one Nation under God, indivisible, with Liberty and Justice for all.

The 7th fold is a tribute to its Armed Forces, for it is through the Armed Forces that they protect their country and their flag against all her enemies, whether they be found within or without the boundaries of their republic..

The 8th fold is a tribute to the one who entered into the valley of the shadow of death, that we might see the light of day.

The 9th fold is a tribute to womanhood, and Mothers. For it has been through their faith, their love, loyalty and devotion that the character of the men and women who have made this country great has been molded.

The 10th fold is a tribute to the father, for he, too, has given his sons and daughters for the defense of their country since they were first born.

The 11th fold represents the lower portion of the seal of King David and King Solomon and glorifies in the Hebrews eyes, the God of Abraham, Isaac and Jacob.

The 12th fold represents an emblem of eternity and glorifies, in the Christians eyes, God the Father, the Son and Holy Spirit.

The 13th fold, or when the flag is completely folded, the stars are uppermost reminding them of their Nations motto, ‘In God We Trust.’

After the flag is completely folded and tucked in, it takes on the appearance of a cocked hat, ever reminding us of the soldiers who served under General George Washington, and the Sailors and Marines who served under Captain John Paul Jones, who were followed by their comrades and shipmates in the Armed Forces of the United States, preserving for them the rights, privileges and freedoms they enjoy today. 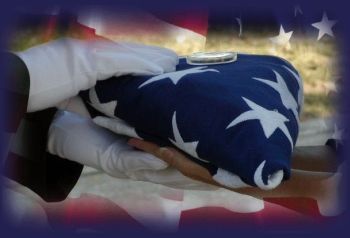 There are some traditions and ways of doing things that have deep meaning. In the future, you’ll see flags folded and now you will know why.