Our local VVA Chapter #154 held our 31st POW/MIA 24-hr vigil at Resurrection Cemetery on Sept. 15, 2017 to remember those who did not come home. I was one of the guest speakers at the opening ceremonies and included my speech with accompanied photos. First, you might be able to manipulate the photo below as I scanned it from our local Saturday paper (I wore the red shirt). 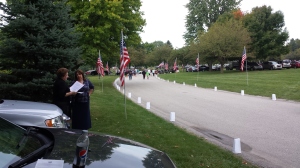 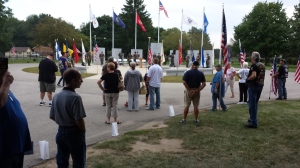 Shot from the entrance to the Veterans area

Posted guards at our MIA monument – guards changed on the half hour and the names read hourly. This continued for 24 hours – cemetery stayed open for visitors who wanted to visit during the night. 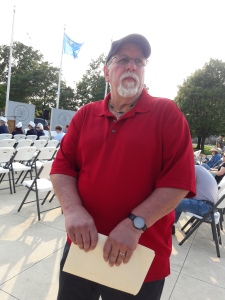 Me posing prior to the ceremony 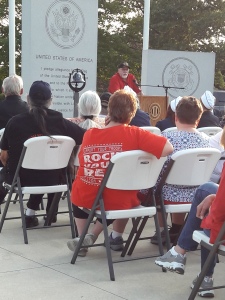 The following is my 10-minute speech at the ceremony:

Good evening honored guests, friends, and brothers…thank you for coming.

I went to Vietnam in 1970, and like those fellow soldiers with me, we were scared, naïve, and innocent. Many of us wondered why a non-military aircraft with female stewardesses (Pan American in my case) would even land in the middle of a war. All of us expected a bullet or shrapnel from a mortar round any moment now…after all, that’s what our instructors drummed into our heads all through basic and Advanced infantry training. We were also perplexed that everyone in uniform was so casual and most walked around the airport without carrying a weapon. 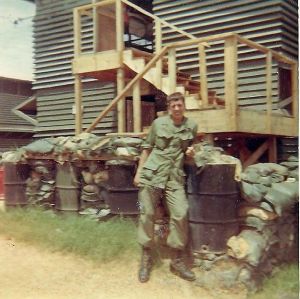 After arriving at CuChi, the main basecamp for the 25th Division, we saw much of the same there. It was during our new arrival week-long training that we learned that some areas of the country were relatively safe – like that basecamp – and found it difficult to fathom that there was even a war being fought outside the bunker line. However, that perception quickly changed at the end of the week when we flew out to join our units in the field.

There, I was assigned to a platoon of forty soldiers, they occupied a quarter of the large company sized perimeter – half of the soldiers were on guard while the others wrote letters or were busy packing after the resupply. I felt out of place standing there in my new fatigues, boots, and helmet cover while those around me looked quite the opposite – their fatigues were soaked through with sweat, muddy, ripped, and appeared either too big or small for their bodies. Nobody was shaved and hair was much longer than regulation. I’d soon learn that clean uniforms were hard to come by and sometimes we’d have to wear the same set for a couple weeks or longer. Personal hygiene products were banned in the bush as the smell could be picked up by the enemy.

When I joined my squad of seven soldiers, I felt like a new kid in school. An outsider. Nobody introduced themselves or were even interested in knowing my name or who I was. Seemed that all new guys were treated that way and I’d have to learn on my own.

When we formed up and moved deeper into the jungle, I thought I was going to die any minute; my anxiety level was off the charts and the extra weight I carried while moving through the thick vegetation was killing me.

It was clear that I was thrust into the middle of a terrible nightmare. The first few months served as an intense learning experience, when I’d see, hear, and endure things never thought humanly possible. When coming under enemy fire for the first time and witnessing death first-hand, a life changing transition began…one that can’t be reversed. It was soon clear that most us were hardly ready to absorb the harsh mental, emotional, and physical stress of war. And if the man survived…he would not be the same boy who left.

After six months, the 25th Division was leaving Vietnam and returning to their home base in Hawaii. Those who didn’t have at least 9 mo. In country were reassigned to other infantry units still fighting.

I was part of that unfortunate group and was sent to the 101st Airborne in the northern part of South Vietnam. Once again, I was the new guy, but this time, we were already seasoned veterans and joined by others who came with me. It didn’t take long to gain their confidence.

And then, just like the Wolfhounds, the never-ending patrols and fights with the enemy continued here without reprieve.  As time went on, we found that we’d developed a special bond – one even stronger than family. We had all shared something special in Vietnam, including our innermost thoughts, dreams, and secrets because we developed an absolute trust with one another. Turns out that it’s a brotherhood that will last a lifetime.

Facing threats everyday, many of us truly believed that we’d never leave this war alive. We made no long-term plans, and celebrated life one day at a time. We honestly believed that if we survived our 12-month tour and were onboard the freedom bird flying home – then it was a miracle!

As Steve mentioned in his introduction, I am the author of two books about my time in Vietnam. The first, Cherries, covers my entire tour and goes into more detail about some of those things I mentioned today. It took thirty years to write, but that’s a story for another time. My second book, When Can I Stop Running? Was published last year and tells about a single night in a 2-man listening post in the jungle. The Vietnam portion of the story is intertwined with equally terrifying experiences of my youth while growing up on Detroit’s East Side. Both books are available on Amazon and other book stores.

I left Vietnam in August 1971, a happy and proud veteran who couldn’t wait to get home to my family and friends. There were no parades or warm welcomes – except for family.  Instead, we were scapegoats and treated accordingly. It was unpopular to be a Vietnam Veteran and many of us went into hiding. 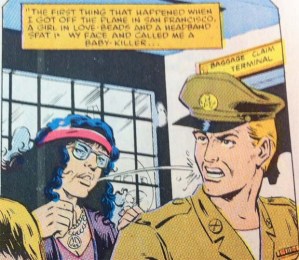 That all changed in 1984 when local chapters of the newly formed Vietnam Veterans of America opened their doors to us veterans. I was quick to join and found that missing bond of brotherhood I left behind in Vietnam 13 years earlier.

We put together a color-guard that first year and participated in many local events to get our name out there. Public opinion about Vietnam changed by then and crowds finally cheered us in parades and other functions. We also began spending more time together and getting our families involved with the chapter. It was great to once again be with somebody who understood.

Which brings me to this night. Thirty-one years ago, myself and the other members of Chapter 154’s Point Team, started something that would continue on through the years. In concert with Oakland Hills Memorial Gardens Cemetery in Novi, MI, we held our first 24-hr. vigil to remember those who are missing in action from the Vietnam War.

I’ve always held a special place in my heart for the POW’s, mainly because of my father. Let me tell you a quick story about him.

In the spring of 1939, at the age of 27, Tadeusz or Ted was a career student. He already had a Masters Degree in Political Science, and was in University working on his Doctorate degree. Through no fault of his own, he never finished! His quest was cut short when the Polish government closed all the universities and conscripted all the males of military age to serve in the Polish military. After military training, most with a degree were promoted to officers, my father was promoted to the rank of Captain in the Cavalry.

Later that same year, on September 1,1939, Germany invaded Poland. The Polish forces were severely under-equipped and attempted to take the Germans head-on, and charging with horsed cavaliers, rather than falling back to more natural defensive positions. The antiquated state of its military was simply no match for the overwhelming and modern mechanized German forces. It only took Germany 17 days to overrun the country.

My father was taken prisoner by the Germans and spent the next six years rotating through various prisoner of war camps – first in Poland and later in Germany near Munich. He was wounded twice – once during the invasion and a second time while a prisoner of war. He said that German guards used to shoot prisoners for sport. 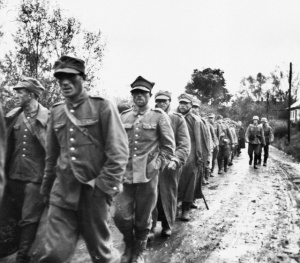 He kept much of his experiences to himself, but did tell me once that life as a prisoner wasn’t too bad during the early part of the war, but after the U.S. invasion in Normandy, guards turned vindictive and food was hard to come by – prisoners were dying of starvation.

After his death in 1996, I discovered some documents and learned that while I was in Vietnam, my father had petitioned the senators and even the president to get me out of Vietnam. Citing that the family on both sides had suffered enough – losing a dozen family members during World War II and of his status as a former POW. The government denied his request and later appeal. He kept this a secret all through the years.

My father and mother both survived their war, and I survived mine along with many of my brothers in arms. But others who served their country in Vietnam never came home – the bodies are still missing and their fates unknown. What about their families who continue to wait…needing closure…and continue hoping for a miracle of their own. We can never forget these brave warriors and must continue our efforts to get a full accountability from our government. Tonight, we’re all gathered here at Resurrection Cemetery to pay homage and to remember those still missing in action…and we’ll continue these vigils until they all come home.  Thank you!