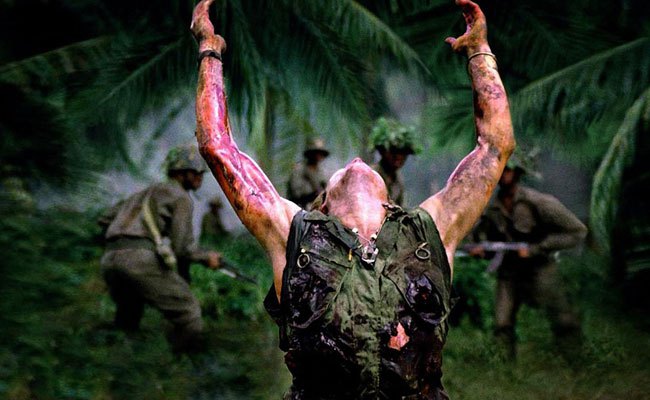 Today is Charlie Sheen’s 49th birthday. I have no idea how many porn stars will be in attendance or how much cocaine is mixed into the frosting of his birthday cake, but he’s only got five more years before he’s legally considered a senior citizen and livin’ the “Sheen Dream” everyday will start to look a little ridiculous. Rather than focus on Charlie Sheen’s antics — I’ve opted focus on Charlie Sheen the actor. Yes, the man used to act in legitimately good movies that weren’t part of the Scary Moviefranchise. Possibly the crown jewel in Charlie Sheen’s film repertoire is Platoon — though it’s certainly a lot easier to enjoy Major League on a lazy Sunday than the horrors of the Vietnam War.

Charlie Sheen was already on his way to becoming a successful young actor — having appeared inThe Boys Next Door and Lucas — but it was Oliver Stone who showcased him as a leading dramatic actor. Stone’s gut-wrenching war epic that was based on his own Vietnam War experience almost never got made because money issues and films like Apocalypse Now and The Deer Hunter had already successfully portrayed the war experience. When Platoon finally did happen some 15 years after Stone had originally written the script it became a huge success and launched Charlie Sheen into a new stratosphere, landing him a star on the Hollywood walk of fame at just 29 years-old.

1. Oliver Stone was hoping that Jim Morrison would appear in the movie. It seems odd that Stone would have any hopes of Morrison appearing in his movie considering that singer died 15 years before the film came out, but at one time it was a real possibility. Oliver Stone told Entertainment Weekly that he had been working on his Vietnam War epic since the late 60s and had gotten a rough draft to Jim Morrison in 1971.

“It was another version of it — a very mythic version. The character dies in Vietnam and goes to the Underworld. A lot of mythology. I couldn’t deal with Vietnam yet in a completely realistic way at that point. And I did send it to Morrison because it had a lot of Doors music in it. And he had it in his apartment in Paris when he died. It was returned to me in 1990 when I made The Doors. Very bizarre.”

2. The actors really were getting high on set. Whether it was a commitment to realism or Charlie Sheen just broke into Oliver Stone’s personal stash, the actors opted for real weed for the “underworld scene.” William Dafoe has said that by the time the cameras actually started rolling though most of the high had worn off and nobody felt much like acting.

3. The movie’s poster is based on a famous war photo. The movie’s famous poster with Elias throwing his hands up in the air is based on an even more famous photo from the Vietnam War. The photo was shot in 1968 by Art Greenspon and in 2000 was recognized as the 13th greatest military photo by Army/Navy/AF Time. 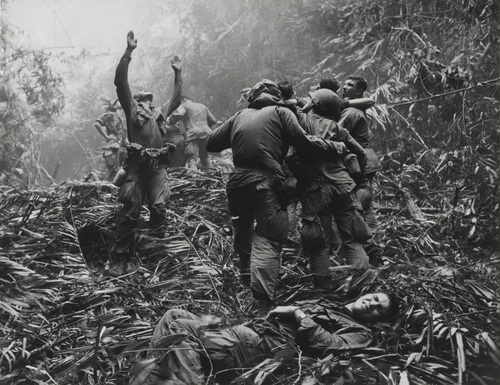 4. Oliver Stone made Charlie Sheen and the rest of the cast go through basic training. Sheen got an easy break with only two weeks of basic training — compared to the traditional 10 week boot camp — but had no contact with family or managers for those two weeks, as Stone wanted him to fully absorb the boot camp process. Sheen credited the experience with helping his acting once the film started shooting.

5. Charlie Sheen went to his father for advice on shooting the movie. Martin Sheen had starred in his own Vietnam movie with Apocalypse Now and Charlie spoke with his dad about that experience to help him better prepare. The actor was actually on the Apocalypse Now set for some time as a child and said filming Platoon felt like deja vu.

Charlie had spent eight months there as a 10-year-old when his father made Apocalypse. “I stepped off the plane and stopped,” Charlie recalls. “That smell hit me immediately: burning rubber, that poverty, that stench, that malaria that’s always in the air. I thought, ‘I’m back. I’m back here doing it again.’ “

6. Willem Dafoe ignored those warnings about malaria in the water. In the movie a soldier is warned not to drink from the water because it might carry malaria. This was probably a good rule to follow while shooting in the Philippines as well, but William Dafoe ignored the advice and drank river water, unaware that there was a rotting pic carcass just upstream. The actor didn’t get malaria, but did come down with a nasty 24-hour stomach bug.

7. Oliver Stone knew Johnny Depp was going to become a huge star. Stone had considered Johnny Depp for Charlie Sheen’s role — but felt that he was still a little green to play such a heavy part. (He also looked at Keanu Reeves, but the wartime violence made Reeves uncomfortable.) Even still, the director felt that it was only a matter of time before the actor took off.

“Frankly, it’s going to sound cliché, but I clearly believed he was going to be a star. He was a great looking kid. He was considered for other roles, but I didn’t think he was quite ready at that time to play Charlie’s role. We got to know each other pretty well in the jungle and I really thought he was going places.”

8. Sgt. O’Neill’s emotional turmoil was reinforced by John C. McGinley’ real-life crisis at the time. The movie was filmed sequentially and the actors didn’t fly home until their character was killed off. At the time of filming, McGinley’s had just had brain surgery, that plus the filming schedule and political unrest in the Philippines took its toll on the actor.

“I think the next day, we shot the scene where I hide under the body, and I was just done by that point. I kept slipping and falling coming out of that foxhole. I started to have a series of breakdowns, and Oliver didn’t want me crying. I don’t know why: it was just sensory overload, I think. I was done.”

9. Stone called Sheen out for being a spoiled kid from Malibu. One particular scene called for Sheen’s character to help unloaded a helicopter. Stone told the actor not to wear a shirt, but Sheen complained about the rocks and dirt kicking up and hitting him in the back, that’s when Sheen saidthat Stone called him in front of everyone.

Stone wanted the shirt off. Sheen refused. Stone turned on him and said, “What? Are you a pussy? Are you a little pussy from Malibu? Played too much volleyball all your life?” That infuriated Charlie. “I got so pissed off I ripped the shirt off, did the scene and had scars on my back for weeks.”

10. Mickey Rourke and Kevin Costner were offered the role of Sgt. Barnes. Tom Berenger wasn’t always a shoe-in for Sgt. Barnes, the film went through several different versions, even one that included Emilio Estvez in the Barnes role. Stone said that Kevin Costner passed on the part largely because his brother had been in the Vietnam War.

“Captain Dye, our advisor, former editor of Soldier of Fortune, is a serious warrior. It was important somehow, given this exercise, to get his respect. So we worked very hard. It mostly hung on soldiering.”

“By the time you got through the training and through the film, you had a relationship to the weapon. It wasn’t going to kill people, but you felt comfortable with it. So someone would say, ‘Elias, get upon that ridge with your squad,’ rather than saying, ‘Kevin, Corey, Willem, put your rucksacks on and . . .’ It was never precious, it was practical.”

12. Oliver Stone was the first Vietnam Vet to win an Oscar. Oliver Stone set out to write his own version of the Vietnam War after returning home in 1969 to counteract what he felt was an unrealistic portrayal in John Wayne’s 1968 movie, The Green Berets. Stone became the first Vietnam War vetto win an Oscar, snagging one for his work with Midnight Express in 1978, and was also the first vet to make a major motion picture about the war.

31 thoughts on “Twelve Things You May Not Know About The Film “Platoon”.”