My guest blogger today is John R, Schembra, who spent his time in Vietnam as an MP (Military Police) in 1970.  He is a published author of  ‘M.P. – A Novel of Vietnam’, and a three-book series featuring a character named, ‘Vince Torelli’ ; a forth installment is coming soon.  The following story tells about one of those nights during his year-long tour. 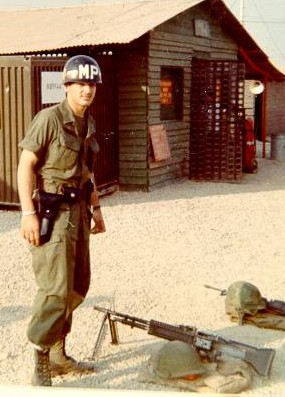 I was drafted in 1969 and after basic training at Ft. Lewis, WA and then MP school at Ft. Gorden, GA, a full fledged 95B. I was stationed with the 557th MP Co., 18th MP Bde, out of Long Binh, next to the town of Bien Hoa.  Our duties were varied, some of which, but not all, were law enforcement related.  We were responsible for patrols in Bien Hoa 24 hours a day, traffic control, accident investigation, American vehicle/personnel checkpoints, convoy escort, special details such as protection and escort of high ranking civilians and military, security for the doctors and nurses who provided free medical treatments for the orphans at the nearby orphanages, working combined police patrols, security searches of vehicles and checking VN civilian’s id’s, plus we were responsible for an 8 square mile area around Long Binh which was designated our TAO (Tactical Area of Operations), manning OP’s (Observation posts) on a nearby hill, setting up ambushes, general patrol, and acting as a quick response force when needed.

One of the many duties of the Military Police at Bien Hoa was town patrol during the night as a two man jeep patrol, as a curfew was enforced from nine p.m. to six a.m.  Mostly we checked the local bars and brothels for off-limit G.I.s.  If we found any, we would note their info and units and, absent any other violations like drug possession, intoxication, black marketing, or being AWOL, we would just take them back to their company, let their CQ (Charge of Quarters) officer know, and release them. We were tasked to investigate any gunfire or explosions reported to the PMO or that we heard while on patrol. 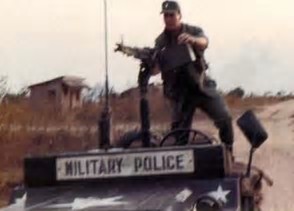 Other MP units were three man units, two American MPs and one Vietnamese MP (Quanh Canh) as we were not allowed to enter private Vietnamese dwellings unless we accompanied a Vietnamese MP or National Policeman (Cahn Sat).

One night my partner, Mike Leon and I were on patrol in the city, on a particularly quiet night.  Hot and muggy, not much to do, I can say it was pretty boring.  Our greatest concern was keeping an eye of the PF’s (popular forces) as we drove by to keep them from taking potshots at us.  They were groups of five or six men who were either former ARVNS, or were unfit for military service, that were armed by the ARVN and the U.S. army to provide static control points in the city to watch for infiltration or other enemy movements.

The actual entrance to Death Alley

As we approached the entrance to the city, a figure stepped from the mouth of a narrow alley nicknamed Death Alley, just inside the city entrance.  According to rumor, it was appropriately named, as it was well known that you didn’t go in there unless it was in force and for a specific purpose. Routine patrols there did not exist.  The person was waving his arms, calling out to us, “đến đây, đến đây MP, đến đây“, which meant “come here.”

Mike slammed on the brakes, skidding to a stop. I had my M-16 pointed at the figure as Mike grabbed his rifle and got out of the jeep.

“Hands up, keep your hands up!” we yelled, suspecting a possible ambush.

We could see the person was a boy around 12 years old. He, in turn, could see two MPs with their rifles pointed at him, and stopped where he was, his hands above his head.

“GI, there,” he said, excitedly, pointing down the alley. “He hurt beaucoup bad.”

“Come here, đến đây,” I called, keeping him covered with my rifle.

The boy began walking toward me, saying, “You hurry, MP. Maybe he die soon.”

“Stop there,” I told him, as the boy got to the front of the jeep. I was thankful he had a decent command of the English language!  I covered him while Mike watched the mouth of the alley.

“GI inside. You come quick. He maybe die, come quick.” The boy gestured toward the alley, taking a couple of steps in that direction.

“Call it in, Mike and get us some help. I’m gonna check it out.”

“Better wait for some help, John,” Mike said, “That ain’t a good idea!”

“I know, Mike, but we got to do something. I’d hate to think there’s an American in there needing help, and we waited too long. Besides, I got a feeling the kid’s on the level. I’ll take him with me. You come after us, partner, just as soon as you can.”

Mike wanted to go with me, but couldn’t.  Someone had to stay and secure the jeep until help arrived.  “No, man,” I said.  “You know the rules. We can’t leave the jeep. I’ll be OK. Call for help, then come give me a hand when it gets here.”

I grabbed my flashlight and walked up to the boy, and pointed at the alley. I then grabbed a handful of the back of his shirt, and walked him to the entrance. I put my arm around the boy’s neck from behind, and pulled him back tight against my chest. His head came up to about my chin, so using him as a shield most likely wasn’t going to help if there were enemies waiting for us. Still, using him as a shield made me feel better. The alley was nearly pitch black and as we stood there I listened carefully to the silence.

After a minute or two I backed up against the near wall, and slowly worked my way into the alley, sweeping the opposite side with my M-16, ready to fire at the first sign of trouble. I could feel my heart racing, feeling like it would burst out of my chest, sweat running down my face.

I swung my rifle back and forth as I moved down the alley. Each time the boy started to talk, I would clamp my hand over his mouth. We had gone about 70 meters into the alley before I saw a blacker lump lying against wall about five meters ahead of us. I tightened my grip on the boy and moved slowly toward the shape.

Once we were next to the shape, I released the boy and got my flashlight out. To his credit, he did not bolt away as I expected him to do. Shining the light on the lump showed a figure in jungle boots and fatigues lying on his side, with his back to me. I could see the back of his shirt was stained with a dark substance, which turned out to be his blood. I bent over him and grabbed his shoulder, at which he moaned softly, rolling onto his back. I could see he was an American, his face battered, swollen, and covered with blood. I told the boy to go get the other MPs. The boy ran back toward the entrance, and when I was sure he was gone, knelt down next to the soldier.

Hey, buddy, how’re you doing?” I asked, shining the light on his face.

I could see several deep cuts, and saw that his eyes were swollen almost shut. His upper lip was split, and he was missing some teeth. None of the injuries looked bad enough to be life threatening. I saw his name tag, and his unit patch revealed he was with the 20th Engineer Battalion.

I carefully rolled him onto his side, and slowly shined the penlight over his back. I could see several holes in his blood-soaked fatigue shirt, probably from a small knife.

I heard footsteps approaching from behind me and quickly snapped off the light, and pointed my M-16 toward the sounds, covering the alley. The footsteps stopped, and a voice called out softly “John? It’s me and Wild Bill. Where are you?”

“Over here, Mike,” I replied standing up. “Give me a hand. This guy’s hurt bad.”

Mike and Wild Bill hurried over and crouched down, facing in opposite directions, their weapons at the ready.

I told Wild Bill to cover us as Mike and I carried him out.  When we got back to the jeeps, we put him in our jeep and took off for the 93rd Evacuation Hospital at Long Binh.

Three hours later, I was sitting in a hallway outside a surgery room at the 93rd. I had been assigned to stay there since once we got the soldier’s name had we found out he was listed as AWOL, and a possible deserter, three months earlier.

A doctor came out and approached me and told me the soldier would be OK. He lost his right eye, lost a few teeth, and suffered five stab wounds to his back.  Only one was serious, collapsing his lung.  The doctor said he would be in the hospital for about a week. I went with him to the soldier’s bed and handcuffed him to the bed rail. I told the doctor to call the PMO when he was well enough to be released.  A 24 hour MP guard would be assigned to stay there until that time.

I learned later that he had a pregnant Vietnamese “wife” living in the city, and that he was teaching English at a small school to earn a meager living.

My guess is that he was probably wrapped up with the black market or drugs, and somebody didn’t like the way he was doing business. 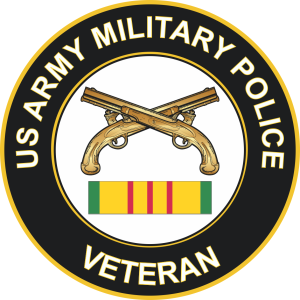 If you are interested in John’s works or want to know more of his stories, then visit his website:  http://www.jschembra.com,

Thank you Brother for allowing me to publish your story here on my website. It is my goal to provide readers with ongoing stories about our Vietnam Warriors so they may learn more about what we did there.  Thank you for your service and Welcome Home!

17 thoughts on “One Night as an MP in Vietnam”