During the 1980’s, on behalf of the Vietnam Veterans of America, Chapter 154, I visited with the local high schools and spoke to the twelfth-grade history classes about my experiences in Vietnam. My presentation usually began with a photo slide show synchronized to Billy Joel’s song, “Goodnight Saigon.” To support this new educational venture, fellow chapter members joined me in contributing personal pictures from their tours which were then converted into slides for the projector’s carousel.  Back then, most history books and classes taught very little about the war and how it affected mostly the “Baby Boomer” generation. This was just one way of getting the word out.

These teenage students were in awe during the presentation, staring at the screen – faces exhibiting a mix of emotions. There were no undertone comments or stirring in the room; the students sat transfixed by the images before them and remained extremely attentive during the one hour we were there.

When informed that the soldiers in the slide show were only a year older than most of them, the students all looked to one another in disbelief. Heads began shaking vigorously, and comments like, “no way, not this kid!” turned into a chorus. Video games had not yet been invented, so this was new territory for them. 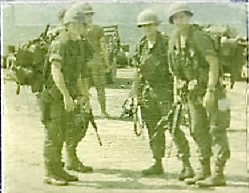 It was difficult for the students to fathom that food, water, clothing and personal hygiene products were not readily available in the boonies. For the infantry soldiers, meals consisted of canned c-rations; the menu and amount depended upon how much a soldier wanted to carry on his back over the next 3 – 4 days.

Doesn’t sound like much, but to press my point, I suggested that the next time they went to the supermarket, they should try collecting a dozen different meals in various sized cans – taking enough to last 3 to 4 days. I offered up examples like cans of spaghetti or ravioli, tuna, veggies, soups, fruit and meats; all should be placed in a single container and weighed to see what the total might be. Weight meant everything in the bush and having to carry any more than what was absolutely necessary was senseless to the grunts.  The bare necessities alone which they carried were ammunition, grenades, trip flares, hand flares, claymore mines, poncho and liner, mortar round, 100-round belt of machine gun ammo, weapon cleaning equipment, and personal stuff inside a waterproof ammo can. Add to it add the food, water, a steel helmet, weapon and more ammunition.

Speaking of water, let’s not forget that water is a necessity – so how much should they carry? Note:  each quart of water weighs a little over two pounds. During the dry season, water sources were not readily available and each soldier had to carry a minimum of six one-quart canteens just to get him through to the next resupply – three to four days later.  So, in rationing water, the ability to take care of personal hygiene needs such as washing faces, hands, hair or feet was a rare occurrence.

During the monsoon season, it rained daily for months, and the water was plentiful. Bomb craters filled with water and became sources for both drinking water and bathing.

Canteens filled from these craters or streams had to be treated with iodine tablets to kill parasites and other “organisms and swimming stuff” before it could be consumed – floaties and all.  The water was often a murky color and had a slight odor, but after thirty minutes, it was supposedly safe for drinking.  I’ve seen times when we ran out of drinking water the day before and came upon a pond or trickling stream to fill canteens.  This was a critical time and extremely difficult for us to wait the allotted time before taking a drink.  Those who couldn’t paid a price 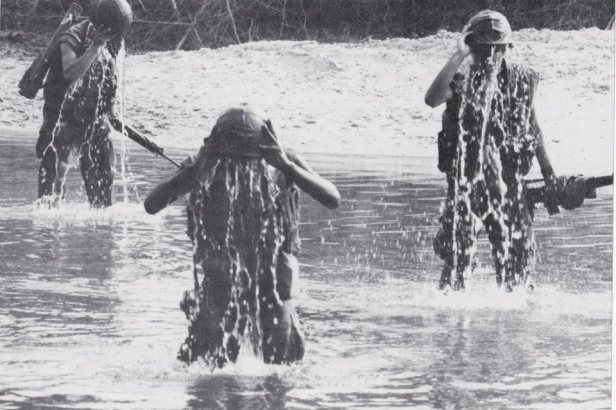 No time to bathe on patrol – troops simply cooling off

soon afterward – suffering intestinal inflammation and other maladies.  Packets of Kool-Aide, lemonade, Tang and others helped to camouflage the metallic taste and “floaties” when iodine was used.

Side note: We now know that the defoliant, Agent Orange, had leeched into the groundwater and streams, and rinsed from vegetation when we used to “catch” cold, refreshing rainwater as drops fell through the trees and surrounding foliage during the monsoon season.  I don’t think Iodine tablets were strong enough to protect us though!!

The jungle fatigues worn by soldiers were lightweight and designed to dry quickly. However, during these humps through the jungle, fatigues were continuously soaked through with sweat, ripped by thorny vines, worn out by repeated crawling on the ground, and were never available in your size. Extra clothing, sometimes, came out on the resupply, but normally only enough for usually half of the men. As a result, only the worst cases got replacements. Everyone else had to wait their turn until the next resupply. It was not uncommon to wear the same fatigues for three weeks or more. By that time, most were a whitish color from evaporated sweat, stiff and brown from dried mud and sometimes blood, and every pair was ripped and torn throughout. The standing joke was that once removed, the trousers could stand on their own accord.

Grooming was another luxury that most of us didn’t have time for.  We didn’t carry combs or hairbrushes, shaving equipment, soap, deodorant, toothpaste, and toothbrushes were used to clean our weapons and ammo.  Smells carried in the jungle, enabling anyone to zero in on your position – even if they couldn’t see you.

Rice paddy water was full of feces etc. and unsafe to drink even with iodine – smells as bad as it looks

It was best to smell like the rotting jungle you lived in and offering up the identical scent.   There was nobody to impress in the bush, and most if not all, could care less.  At times, we were able to smell approaching enemy soldiers because of their diet of fish, rice and fermented sauce, and sometimes, the scent of burning weed when they smoked it.

Returning to the firebase after a month in the jungle was well received by everyone – except helicopter crews and those in the firebase; all giving us a wide berth and staying as far away from us as possible. The stench of returning warriors was unbearable to those greeting them at the gate. Many of us laughed because we didn’t notice anything different in the way we smelled, however, we were quick to note a clean and sterile, soapy smell as we entered the compound. It’s weird but true. 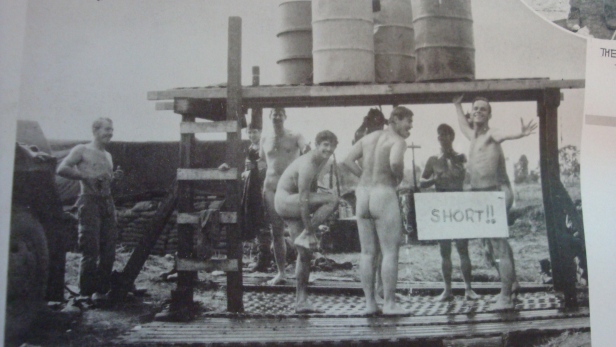 Food, water and clothes were in abundance at the firebase – everyone could eat, drink and shower as much as they choose.  This short visit only lasted three days. Then, it was time to leave on another month-long jungle adventure.

These are the simple things in life that most people take for granted. Have you ever had to go a day or two without food or water because you didn’t pack enough? What about wearing the same clothing continuously for a couple of weeks or more? How about not bathing, washing or brushing your teeth for weeks at a time? It is difficult to imagine living like this, but to the young soldiers in the Vietnam jungles, this was a way of life.  Unfortunately, these conditions contributed to a malady of skin diseases such as boils, ringworm, jungle rot, severe rashes, trench foot, and infected cuts and lesions.  Nobody was spared.  It was not pretty!

The school, later informed us that we had made quite an impression on the kids as they continued to talk about our visit.  As a result, they asked us to return the following year but warned us that they were going to expand it to the entire high school student body.  That was great news!  I continued to use vacation days to address the schools and received a warm reception from the students during the next few years.  My role soon evolved into the need for a “Speaker’s Bureau” in the chapter – adding members and duplicating the slides and projectors as more and more schools asked for us. I soon stepped down and let the “Cherries” carry the baton forward. The students of the era were a hungry bunch, soaking up every word and wanting to learn more and more about what we did in the war.  In fact, I’d be willing to bet that many of the same students probably became soldiers themselves and participated in the Iraq invasion in the not too far future.

Below are three High School Student essays in part

On a personal note, I’ve learned that several high schools in the country were making my book, “Cherries”, mandatory reading in their history class.  Teachers have sent me questions from students, copies of their completed projects (which I’ve shared on this website), and recently, introducing me to Skype so I could communicate with the class directly. I couldn’t be more proud. 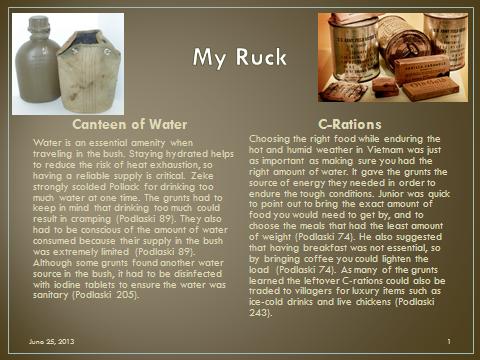 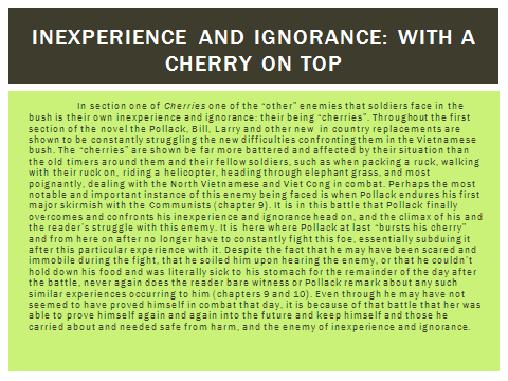 50 thoughts on “Sir, How Did You Stay Clean in the War”