CU CHI – Three Viet Cong fell victim recently to a 25th Division combination of 1st Wolfhound alertness and mechanical ambush power 16 miles north of here. In one action, elements of Alfa Company, 1st Battalion had just taken in their claymores and were preparing to move out.         Surprise   Suddenly, Sergeant Richard Guerra of Pleasonton Tex., spotted three VC about 300 yards away, headed toward the American position. Guerra alerted his men and they quickly set up an ambush.  “They were walking directly toward us,” said Private First Class Larry Sipes of Brownsville, Tex.  “One had stopped to investigate something while the others moved to within 25 yards of us.”         Open Up   The Alfa Company troops held their breath and their fire until the Viet Cong were almost close enough to touch, when they opened up with a barrage of small arms and machinegun fire spiced with a few hand grenades for good measure. The only enemy to escape was the wary fellow who had stopped down the path to investigate.         Resupply   “We figured they were probably a resupply team because of all the stuff they were packing,” said Specialist 4 Alan Sterneau of Bellville, Ill. “They had a number of plastic ponchos, a load of rice, several bottles of insect repellant and a few packs of cigarettes. Two days earlier, another Alfa Company element heard one of their mechanical ambushes explode as they were moving to their night defensive position. Later, after a sweep of the area, one enemy was found dead and several trails of blood were spotted where wounded Viet Cong had managed to stumble away. The Alfa Company Hounds captured one AR-47 and two wallets in the area. 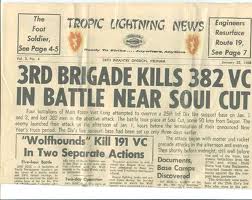 CU CHI – “Comrade men, please to pass the Tropic Lightning News.” Because of the lack of well-written and timely reading material in his own language, the enemy has apparently switched from the old run-of-the-Communist mill propaganda to the 25th Division’s Tropic Lightning News. On a recent operation southeast of the Boi Loi Woods, men of the 2nd Battalion, 27th Infantry’s Delta Company discovered a large cache which included 20 copies of the division’s newspaper. ”While we were securing a thickly-boobytrapped area, we spotted several bunkers,” said 1st Lieutenant Peter Paul, a platoon leader from Lantana, Fla. The next morning his men were sent in with demolition equipment to blow all the bunkers in the area.  “I was moving down a small path checking for trip wires when I came across a little crawl trail,” Paul continued. After checking out the area, the men found a large bunker with a tunnel, fighting position and cooking position, all harboring parts of a supplies cache. Evacuated were 50 smoke fuzes, assorted cooking utensils, 170 rounds of small arms ammunition and the periodicals. Left in place to be destroyed, were two 82mm mortar rounds, one 60mm mortar round, two claymore mines and several booby-traps. No one knows exactly what Charlie planned to do with the Tropic Lightning News. He might have planned to use it for…no, he couldn’t have…not that.

1st Bn, 27th Inf.   2/8/71 Charley Company 1st Battalion 27th Infantry Wolfhounds accounted for eight enemy dead in three separate reports near FSB Beverly. An early morning mechanical ambush killed three Viet Cong (Vietnamese Communist (VC)) west of Beverly.  Confiscated in the action were two AK-47s and a K-54. Later that day other ‘Hounds of Charley Co. engaged an enemy group northwest of Beverly.  Artillery and helicopter gunships helped the GIs to overwhelm the Communists, and resulting in two enemy dead, with no US casualties. A week later, in the same general area, Charley Co. elements located a fresh grave containing three dead VC. The Recon platoon of Echo Company also scored high over a four day span, killing four enemy and destroying 14 bunkers in six actions. Working northwest of Beverly, the Recon ‘Hounds followed up a mechanical ambush detonation with small arms fire and brought down one VC dead. Later in the afternoon, they encountered a group of about five enemy hidden in a bunker complex.  After determining that the Communist troops were well entrenched, artillery was called in.  A subsequent sweep turned up one dead VC. The next day the Recon force intercepted a squad of VC moving along a trail.  After a brief volley of small arms fire the men took out after the fleeing soldiers. During the next day’s activities the Recons found two seven-bunker complexes and destroyed them. 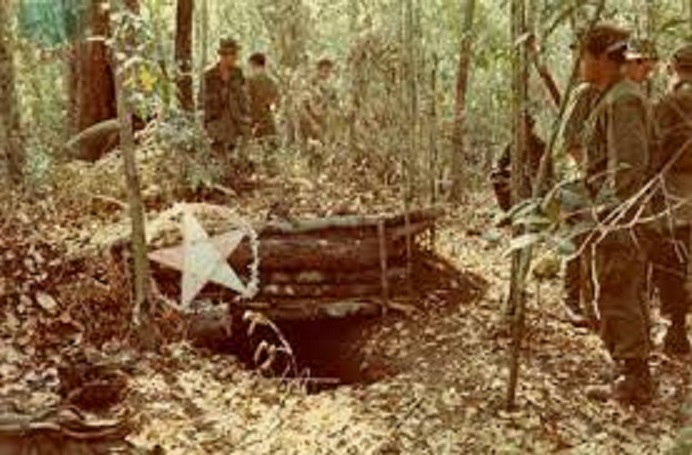 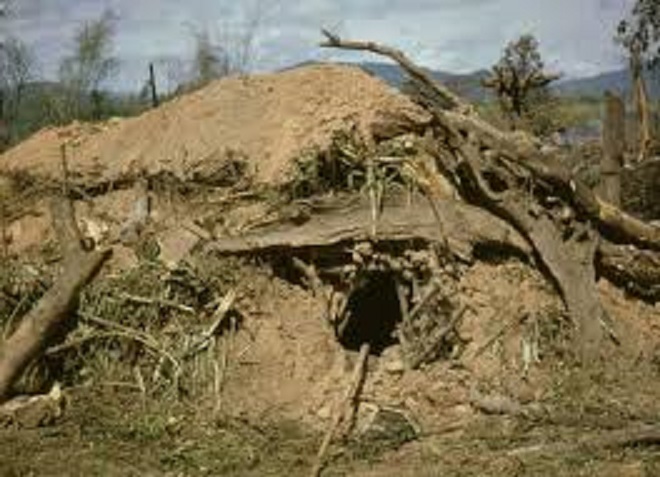 FSB BEVERLY – 1st Bn, 27th Inf.  2/22/71 Over a recent two-week period the Wolfhounds of the 1st Battalion, 27th Infantry killed 11 Viet Cong and located seven bunkers in the area northwest of here. Alfa Company opened the period by locating the bunkers and then several days later killed one VC with a mechanical ambush. Three days later Alfa’s totals were completed when an enemy force was surprised by the Hounds.  The quick contact in which the enemy didn’t stay around very long, resulted in three VC killed. Delta Co. reported six VC killed and various amounts of supplies captured in three separate actions. Two of the contacts were by mechanical ambushes, the first killing three and the other killing one.  Besides the bodies, the GIs found four AKs, a carbine and sundry amounts of ammunition and supplies. Two more dead Communists were found by the Wolfhounds in the third report. Charley Co. bushed an unknown number of VC early one morning.  There was no return fire.  A later search uncovered one badly wounded Cong who was medevaced out of the area.

MONKEY BUSINESS – Two members of Alpha Company, 1st Battalion, 27th Infantry climb a nearby tree to get a better view of the surrounding countryside. (Photo by SGT Jack Strickland) 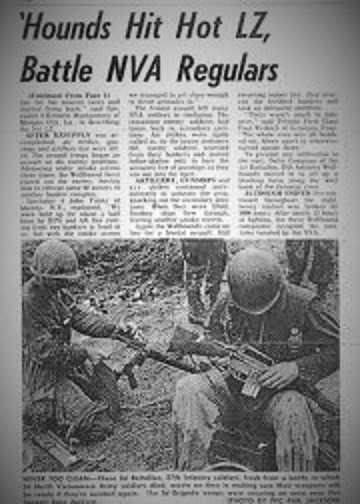 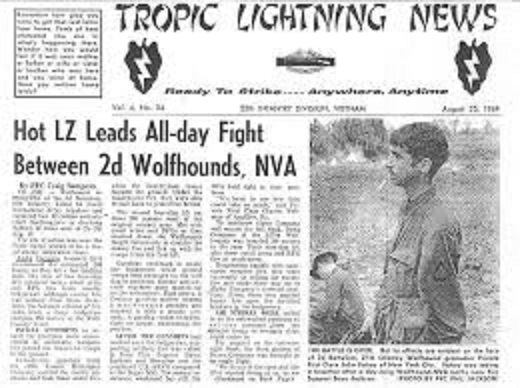 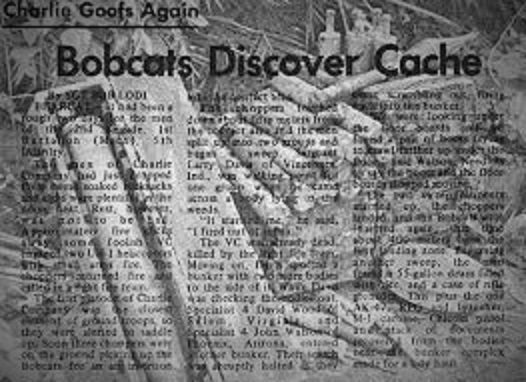 FSB TOMAHAWK – Daily routine tasks such as pulling guard and improving base defenses are all geared to being on guard against Charlie. Every day, troops of the 4th Battalion (Mech), 23rd Infantry perform such routine duties as putting up RPG (rocket propelled grenade) screens, installing claymore mines and trip flares, setting up radar, improving the berm line and pulling guard. It’s all become so routine that most of the Tomahawk infantrymen take their job for granted. It’s just something that has to be done. Every day. Despite the mud, rain or blazing sun. BERM PROTECTION – (Above right) A bulldozer scrapes up a protective berm at Fire Support Base Tomahawk for infantrymen of the 4th Battalion (Mech), 23rd Infantry.

ROCKET RESISTER – (Left) Troops of the 4th of the 23rd stretch RPG (rocket propelled grenade) screen in place along a newly formed berm at Fire Support Base Tomahawk. CHARLIE WATCHING – (Right) By day this tower serves as a guard observation post. By night, radar (enclosed in plastic) takes over the job of Charlie Watching. Tower is at FSB Tomahawk, 20 miles south of Xuan Loc.