During the Vietnam war, newly arrived soldiers were referred to as Cherries (virgins to war). At least this is how it was in the infantry. I’ve heard other acronyms as well such as FNG (fu*king new guy), Newbie and fresh meat, but they weren’t used as often. A grunt (infantry soldier) remained a Cherry until he lost his innocence, which was usually after his first firefight. I remember seeing war movies growing up where everyone was depicted as a brave warrior, rushing the enemy through a wall of flying steel. Let me tell you that most every soldier still remembers his first firefight. It doesn’t have to just be Vietnam, it could be Korea, WWII, Iraq, or anywhere else where you are put in harm’s way. In my case, I was so scared and felt paralyzed and helpless as I laid on the jungle floor – bullets popping overhead and impacting all around me.  Only two thoughts were going through my head at that time: how to sink deeper into this ground and I hope I don’t get hit.

I wasn’t a Rambo. Instead, I was confused and unsure of what to do next. Sure, shoot at the enemy they say, but how do you do that when you can’t even see them – which was most of the time! In my haste of finding shelter, my rifle lodged between some tree roots and I wasn’t able to get it free to protect myself. Of course, I pissed myself – just like every other Cherry had done. This turns out to be one hell of an initiation! 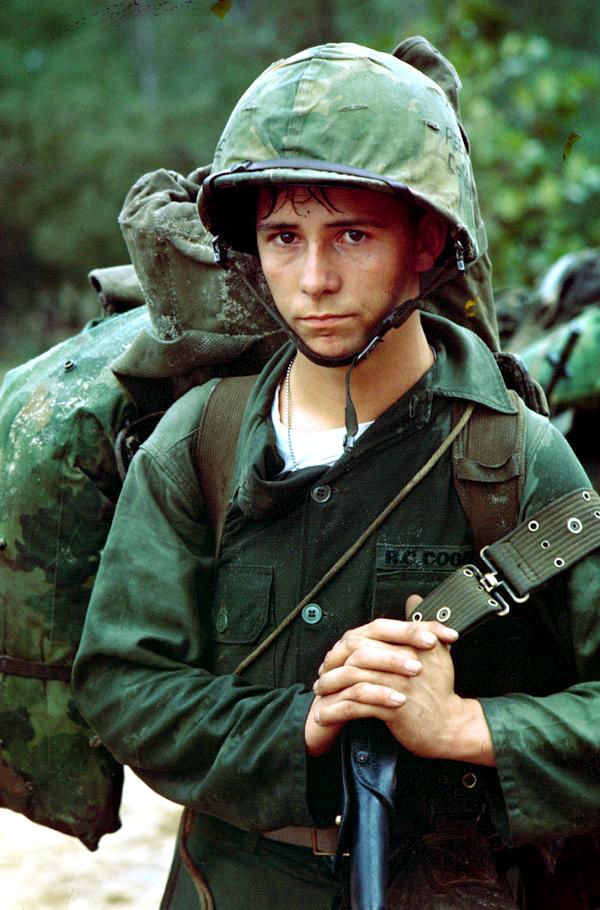 The firefight itself is just a small part of losing your virginity and much of the time it only lasts a few moments before the enemy retreats. It’s what you see afterwards that stays with you forever. Soldiers you just met are laying seriously wounded or dead, flesh and body parts are strewn about, blood is everywhere! Your gag reflex was on overdrive. Rarely did I see a dead enemy soldier in Vietnam as bodies were normally taken when the enemy withdrew. And this made life frustrating!

There is some comparison between a Cherry and a freshman in his first year of high school. Just think about it. You are scared, apprehensive, don’t know anybody, hope you fit in, and you know there is much to learn before you are able to graduate. With this in mind, add the threat of death or maiming to your daily routine – somebody may jump out of a locker in the hallway and shoot you (although today that’s not really far-fetched). You must be hyper vigilant  just to survive 365 days in this school.  And still the learning continues.
Thank you for taking the time to read this. Should you have a question or comment about this article, then scroll down to the comment section below to leave your response.

22 thoughts on “Welcome to Nam, Cherry!”